The only problem is that the federal government doesn't think he should be able to.

Dillman said he and his wife were arrested at their home on March 4. Dillman said he is charged for possessing and producing cannabis, charges that he vehemently objects to.

"It's all about bureaucracy and money, not common sense," Dillman said on Wednesday afternoon at a press conference at Farm Assists, a cannabis dispensary on Gottingen Street in Halifax.

Dillman was joined by Debbie Stultz-Giffin of Maritimers Unite for Medical Marijuana Society (MUMM), who spoke out about the need for people like Dillman to be able to grow their own cannabis.

"Now he's forced to choose between his health and his freedom," Stultz-Giffin said, listing a variety of ailments that Dillman suffers from, including arthritis and back pain. According to Stultz-Giffin, only cannabis has proven to be an effective treatment for Dillman.

"I have to be able to grow my own," Dillman said, arguing that cost and health concerns make him unable to purchase cannabis through dispensaries.

Dillman and others are watching a court decision in British Columbia very closely, where the question of home production of cannabis is being debated. A March 2014 injunction by the B.C. court temporarily allowed home production for those with a valid license.

Dillman's license expired in February 2014, meaning he didn't have a valid license when the injunction was granted and wasn't eligible to continue growing cannabis at home, though that didn't stop him.

In his mind, it's an unjust situation with no solution.

"Shame on the government," he said with obvious disgust. "I have no options here."

Dillman is scheduled to appear in court in early April, where he will learn what sentence he could face if convicted.

Halifax police won't confirm charges have been laid against Dillman because information has not been sworn in court. But they say they did arrest a man at an address where Dillman says he lives. 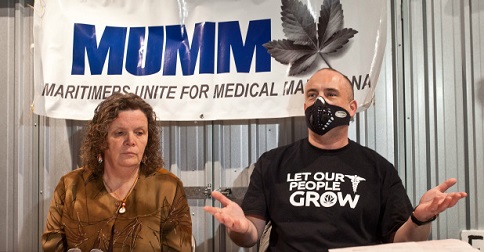