Medical marijuana investors grilled public officials Wednesday for any scrap of information they could get about applying for state licenses before they must fork over up to $25,000 for the privilege. Nearly 300 people turned out at a public meeting to ask state regulators about the process to apply to grow, dispense or use medical marijuana. Questions ranged from the highly technical – someone asked if it's OK to use vaporized sulfur on marijuana – to the constitutional, such as whether it's legal to prohibit owners of medical marijuana businesses from also being customers.

State officials answered what questions they could but noted that the state law and the rules for implementing it don't cover everything. "What we are looking for is the best plan you can give us," said Ray Watson, general counsel for the Illinois Department of Agriculture. "We do not want to restrain the creativity of the industry." Each business entity may apply for a permit to operate up to five dispensaries and three cultivation centers out of the 21 grow centers and 60 retail shops that the state will authorize. Regulators will choose which applicants get permits through a scoring system based on business, security and cultivation plans along with numerous other factors.

Business applications, due by Sept. 22, require fingerprints, background checks and tax returns for all owners, along with detailed business plans. Patient applications will be taken starting next month and must include a doctor's recommendation that the drug will provide relief from one of about three dozen specified medical conditions. None of the applications will be made public. State officials will also certify private and state laboratories to test the marijuana for various strains and potency. The state does not have plans, though, to certify training programs for doctors, as one questioner proposed.

Several questions addressed the issue of foods that contain marijuana, which are popular in other states that already have medical marijuana. Marijuana edibles may take all kinds of forms, from brownies to "medicinal chocolate," but regulators said they cannot be made to look like commercial candy, like a Baby Ruth or Butterfinger. All marijuana, including edibles, must be produced and put in sealed packages at the cultivation centers, so several entrepreneurs questioned how they would let customers see, smell and touch their products. Any package opened as a sample must be disposed of within a week, regulators said.

One practice that regulators discouraged was having the same owners or key figures, such as master growers, listed on applications for more than the allotted limit of facilities. Officials said they are trying to prevent concentrating the industry in too few hands. One sore spot with many who attended the meeting was the requirement that patients and caregivers get fingerprinted and pass background checks. Officials could not cite another state with such a requirement, and other medicinal drugs don't typically carry such requirements. Regulators noted the requirement is written into the state law, so cannot be changed without legislative action. With the application process just getting underway, medical marijuana is not expected to be available until next spring. 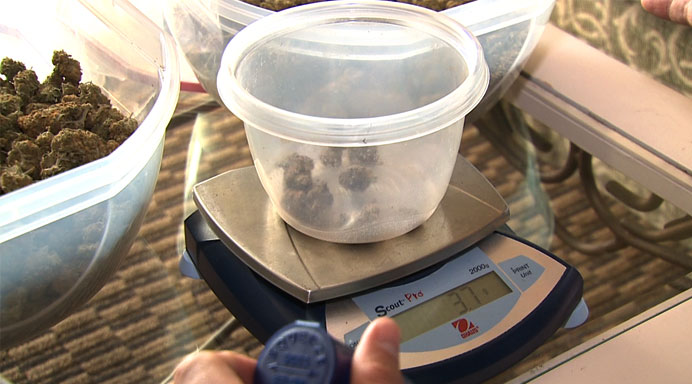