Oregon agriculture officials have spent months crafting rules for industrial hemp production with an eye on getting them in place in time for spring 2015. But a Portland man with land in Dufur doesn't want to wait. Rick Rutherford, a 47-year-old North Portland man who sees big potential for the industrial hemp crop, submitted an application to the Oregon Department of Agriculture last week, requesting permission to grow the plant on his Wasco County land. "Time is of the essence as planting needs to be underway within the next couple of weeks to conduct a viable outdoor research pilot program in Oregon," Portland lawyer Courtney Moran wrote in a letter accompanying Rutherford's application to the state.

Rutherford said he's watched nascent hemp programs get off the ground in Colorado and Kentucky and fears Oregon is being left behind. "I think it will be kind of fun to do," said Rutherford, who works for Nicky USA, a Portland-based purveyor of specialty game meat. "I have been itching to do this for a long time." But state officials on Thursday said they aren't ready to begin issuing licenses for hemp growers. The rule-writing process has been slowed down by a number of logistical concerns, such as how to assess licensing fees and figuring out who would be designated to process the plant once it's harvested.

Rutherford has asked the state to designate him an extension of the agriculture department, which would allow him to grow the crop under the new federal law. He is interested in helping determine the type of hemp that grows best in Oregon. The plant is a non-intoxicating relative of marijuana grown for its sturdy fiber and seeds. Countries that allow hemp production sanction a select list of well-established strains that have been bred to have exceptionally low THC levels. Canada and European countries cap hemp's THC level at less than .3 percent.

U.S. Rep. Earl Blumenauer, D-Portland, and U.S. Rep. Suzanne Bonamici last week submitted a letter to Katy Coba, director of the Oregon Department of Agriculture, urging the state to establish a pilot hemp cultivation program this summer. In their letter, they say American retailers sell more than $300 million worth of products containing hemp seeds and fibers each year.

Blumenauer and Bonamici encouraged Coba to follow the lead of Colorado and Kentucky in setting up a program that "would allow Oregon farmers to demonstrate the viability of this crop for Oregon agriculture." But Lindsay Eng, director of market access and certification program area for the Department of Agriculture, said Thursday the agency isn't ready to launch an industrial hemp program. Officials are still trying to figure out how to assess reasonable fees that would cover to staff to oversee the program. Eng estimates fees could be up to $5,000 per license. That figure, she said, is based on 20 farmers signing up to grow the crop.

She added that the Oregon Attorney General's Office is analyzing the federal Farm Bill and whether the state has the authority to establish a research program. State law allows the agency to issue licenses for commercial hemp production; research is not addressed. Eng said state officials responded to Rutherford's application on Wednesday. "We don't have regulations in place to issue a license," she said. "We can't do that yet." She said the rules committee hopes to wrap up its work in time for next year's planting. 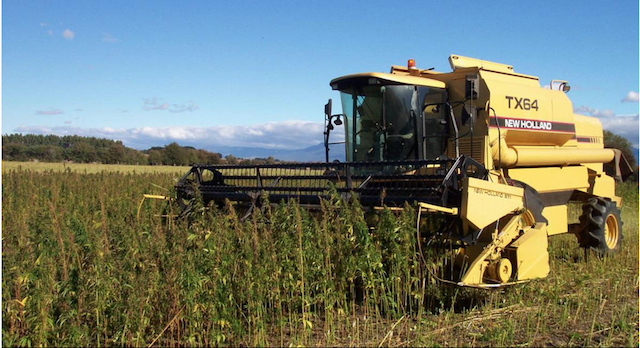