Legal marijuana operations in Spokane County are reporting more money from sales than pot businesses in any of the state's other 38 counties — almost $3.6 million worth from licensed growers, processors and recreational marijuana stores since sales began this summer. Clark County's two recreational marijuana stores are outselling the five spread around Spokane County. Vancouver's two stores reported $2.7 million in sales since opening in July, which is more than the $1.9 million total for the stores in and around Spokane, Spokane Valley and Millwood. Both counties are ahead of King County, which has three stores open in Seattle and one in Bellevue that combined for a total of $1.4 million in sales.

Spokane County's 12 marijuana processors and seven growers lead the state in terms of numbers and total sales. Combined with the five legal pot shops, Spokane County has recorded a shade less than $3.6 million in sales for legal marijuana at all levels that the state monitors. Washington state collects excise taxes of 25 percent on marijuana as it moves from grower to processor to retailer, and stores also charge state and local sales taxes.

In all, the state's licensed recreational marijuana stores have reported a total of nearly $14 million in sales after sporadic openings across Washington in response to a voter-approved initiative in 2012 that legalized marijuana for recreational use by adults in private settings. Spokane Green Leaf on Country Homes Boulevard has sold more than $1 million worth of legal marijuana products since it opened in July, making it the state's fifth most active retail pot shop. It trails New Vansterdam, a Vancouver store reporting $1.6 million in sales to rank No. 1, followed by Herbal Nation in Bothell, Cannabis City in Seattle and another Vancouver store, Main Street Marijuana.

The state began issuing licenses for marijuana growers, processors and sellers in the spring, and the first stores opened in early July. Most stores had to close off and on in the beginning because of a shortage of supplies. The Washington Liquor Control Board, which issues the licenses for all recreational operations, recently began putting individual marijuana businesses' sales and tax receipts on its website. Based on its estimates, the state is owed about $5.4 million in excise tax and about $1.2 million in sales tax from the first four months of marijuana sales.

A computer analysis of those lists shows that the second-largest processor of marijuana is in Spokane Valley. Farmer J's on Woodruff Road reported about $936,000 in sales of processed marijuana since July. Spokane County also has the top two growers based on sales, Green Surfer in Mead and Green Matter in Edwall. 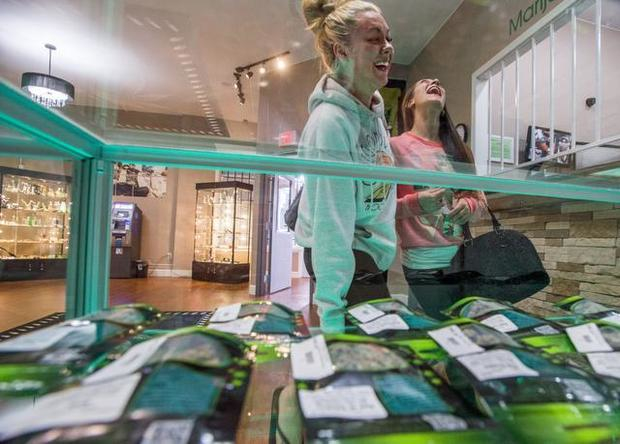