County sheriffs across Michigan are using excess state revenue from medical marijuana patient and caregiver fees to beef up enforcement as the state prepares to license dispensaries and related pot businesses in communities that want them.

The state doled out more than twice the amount of enforcement grant funding than in 2016, when 18 counties applied and spent a combined $823,376. A spokesman for the newly formed Bureau of Medical Marihuana Regulation says the state did a better job promoting grant funding this year, in part by reaching out to county, sheriff and prosecuting attorney associations.

Legislators created the grant program three years ago, allowing the state to distribute registration fee revenue to county law enforcement agencies proportionally based on the number of local patients and caregivers. The 2018 budget signed by Gov. Rick Snyder in July includes another $3 million in potential grants, which sheriffs needed to apply for by Monday.

Law enforcement officials say the funding is critical to enforcing the state's 2008 medical marijuana law, which allows patients and caregivers to grow a limited number of plants but did not anticipate the glut of marijuana businesses that popped up. The state will begin licensing and regulating those operations this year.

The state grants have helped the county increase patient and caregiver compliance, said Mike Jaafar, chief of operations for the Wayne County Sheriff's Department. Two years ago, many individuals leaving unlicensed dispensaries were not properly registered, but "that trend has flipped" due to enforcement checks, he said.

"There's no doubt in my mind it's because of the funding," Jaafar told The Detroit News. "We wouldn't be able to do what we did without the funding."

But Tim Beck, who helped write the original voter-approved law, said using registration fees to fund police raids is an "existential insult" to medical marijuana patients that suggests they pose a "threat" to the public.

The fees were designed to pay for administration and oversight of the law, but Beck said he never imagined they would fund county sheriffs. Some activists have called on the state to lower the fees again after having done so in 2015, but Beck would rather see the state spend the money on other priorities.

"They have an embarrassment of riches, and they don't know what to do with the money except buy more gear," said Beck, arguing sheriffs already receive enough money to enforce state laws. "This was a sop to law enforcement for whatever reason, and that's all it is."

The Department of Licensing and Regulatory Affairs in 2015 reduced fees for most patients from $100 to $60 for a two-year license, but registrations continue to generate excess revenue for the state. The marihuana registry fund has a balance of $34.2 million, said bureau spokesman David Harns.

"We are continually assessing administrative costs to determine if any further changes to patient fees need to be made," Harns said.

Under a Michigan Supreme Court ruling and revised state law, medical marijuana can only be licensed in communities that want pot. At least 33 communities – or about 1 percent of the state's more than 2,500 municipalities – had approved ordinances allowing medical marijuana businesses by mid-December.

In other areas, police and county prosecutors have effectively treated medical pot as an illegal narcotic and a public safety issue under state and federal laws, raiding and closing dispensaries from Grand Traverse and Kent counties to St. Clair County near Metro Detroit.

More than 47 percent of the state grants awarded in 2017 went to Wayne, Oakland and Macomb counties, where sheriff offices spent a combined $871,234 in supplemental funding to enforce the 2008 medical marijuana law.

Wayne County authorities also reported confiscating 1,674 grams of marijuana, along with three bottles and two brownies infused with tetrahydrocannabinol, the active chemical compound in the drug.

The office of Oakland County Sheriff Mike Bouchard, who has advocated for the funding, spent $306,698 of its state enforcement grant in 2017, the second highest total in the state. Oakland has 31,587 registered patients and 4,679 caregivers.

Bouchard's office reported spending $141,326 on overtime pay in medical marijuana investigations, $133,930 on surveillance equipment for a new van and $35,830 on 30 protective raid helmets.

The surveillance equipment, purchased from a company based in California, will allow the sheriff's office to "drop the van" at suspected illegal grow sites for remote monitoring, cutting down on officer hours during what can be lengthy investigations, said Lt. Brent Miles.

"A lot of we do is working off tips or complaints," Miles said. "It takes a lot of personnel to watch and see if somebody's committing a crime and who's coming and going. The van is invaluable."

Macomb County Sheriff Anthony Wickersham's office reported spending $150,747 of the $274,643 in enforcement grant funding it could have qualified for, the third highest total. The county has 11,558 registered patients and 1,364 caregivers.

The Macomb grant was divided between the Sheriff's Enforcement Team, the County of Macomb Enforcement Team and the Shelby Township Police Department. They reported spending a combined $92,547 on overtime and fringe benefits for investigators.

The agencies spent a combined $58,199 on equipment, purchasing a 2017 GMC Yukon and trailer to haul plants, a storage container and a "Blackhawk Tactical Entry Kit" for use entering locked homes or facilities.

Expense reports submitted to the state provide a unique glimpse into enforcement of the 2008 medical marijuana law.

In 2016, the most recent year for which statistics are available, 369 outdoor grow sites and 207 indoor grow sites were identified in Michigan as part of the federal Domestic Cannabis Eradication / Suppression Program.

In Lenawee County, Sheriff Jack Welsh's office said the grant funding has aided a multistate investigation that involves Michigan Attorney General Bill Schuette's office and the DEA. The ongoing probe allegedly involves multiple growers who are transporting marijuana out of the state.

"This appears to be common practice in our area since we border Ohio," Welsh wrote in a report to the state. "Licensed caregivers and persons with cards are growing and manufacturing more product than they can legally. The overage is being taken to Ohio and sold for profit."

Authorities in Oakland and Macomb counties also told state officials they are wary of caregiver "overages" as home growers improve their processing techniques to get more usable marijuana out each plant they grow. Revised state law is legalizing dispensaries this year, but new rules still preclude patients and caregivers from selling extra marijuana to those businesses.

"We're hoping that when the provisioning centers open up and people can purchase their marijuana there, it will eliminate a lot of the other stuff," Miles said. "But you always have a bad element somewhere that's going to work outside of that."

There were 269,553 registered medical marijuana patients in Michigan as of October, up 23 percent from 218,556 a year earlier. Nearly 80 percent of the patients were prescribed marijuana to treat severe and chronic pain, according to state records. Nearly 19 percent registered to treat several and persistent muscle issues.

While caregivers will be allowed to continue growing a limited number of plants, Michigan is poised to begin issuing licenses to larger-scale medical marijuana growers, processors, transporters and dispensaries by March or April, Harns said. Communities that choose to allow pot shops will get a cut of the 3 percent dispensary excise tax, which could be used to finance additional enforcement efforts.

County grant funding will continue next year, but revenue from applications fees and regulatory assessments will fund more enforcement efforts across state government, including new costs for the Attorney General's Office and State Police.

Lt. Eric J. Sanborn of the Livingston County Sheriff's Office, in his report to state officials, said increased public education will be a key as medical marijuana businesses open their doors.

The new law will require "more frequent compliance checks in regards to growers, processors, transporters and dispensaries," he wrote. 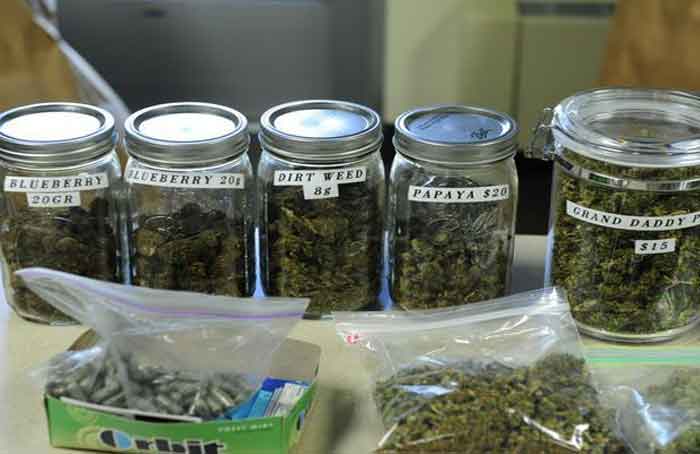