Zoey suffers from several types of seizures and Dravet Syndrome so mom and daughter moved to Colorado Springs, Colo. in July 2014 with great expectations that the state's legalized medical marijuana would give the young girl a better life. It's helped Zoey in many ways, but Mallory and daughter still want to return to Perry where their family and friends live.

However, Tuesday's news that another medical marijuana initiative petition failed left Mallory dejected and frustrated. The petition drive required more than 123,000 signatures and organizers said they had no more than 80,000. It was the second time a movement to put medical marijuana before Oklahoma voters has failed.

"It's disappointing," Mallory said. "We will come back next year (with another petition) harder and stronger."

Mallory and Isaac Caviness, president of Green the Vote, believe public education is critical to getting the measure on the ballot.

"It comes down to educating one person at a time," Mallory said. "We're Oklahoma proud and it'd be nice if people stepped up and approved medical marijuana."

"We will have a strong base going into another run and it should be able to push us over the top," Caviness said.

Mallory, grateful for the petition drive and optimistic about the future of medical marijuana in Oklahoma, must now head back to Colorado where Zoey will continue receiving treatment. Although they miss their family and friends in Oklahoma, Mallory understands the long term commitment will not be easy.

Mallory, a single mother, had been collecting signatures in the Stillwater and Perry areas for the last week prior to the Dec. 29 petition deadline. Several boxes of signatures were submitted to Oklahoma Secretary of State Chris Benge Tuesday. Staff members will begin counting the signatures this week.

"I think there was a strong amount of the public that understands medical marijuana, but some refuse to accept the information we offer," Caviness said.

Caviness provided an educated guess that most of the people signing the petitions range in age from 40 to 70.

"I think this is a demographic that's old enough to understand these diseases and what medical marijuana can do to help alleviate the suffering people go through," he said. "It's been the under-40 crowd that has been the least receptive. They're the ones who look down on us and called us names."

Caviness tried to dispel the notion that children will get high when using medical marijuana, claiming that most children use a combination of tetrahydrocannabinol (THC), the active ingredient in marijuana, and cannabis oil as a medical treatment.

"Zoey has never been high," Mallory said. "You don't know what it's like until you've been in this situation."

The situation Mallory and Zoey find themselves is unfortunate, to say the least. They are considered medical refugees without a home.

Although Zoey now attends a public school and another for autistic children, the regiment of daily therapy, required breathing treatments and doctor's appointments keep the mother and daughter duo in the car most of the time. Mallory and Zoey make periodic trips to Oklahoma to visit family, but it isn't easy with the amount of medical equipment that must be packed for Zoey's daily survival.

"It's rough, draining and very difficult," Mallory said of their life in Colorado, adding that having family members closer would make the situation more tolerable. "But this is what any parent would do to save their child's life. She's getting better. She's gained a year or two developmentally, which I attribute to the medical marijuana."

Before moving to Colorado, Zoey's developmental level was at 27 months. Now, doctors say she's at a 4-year-old level.

To understand Zoey's seizure issues, Mallory explained her daughter would have 100 seizures in 15 minutes before the move to Colorado. That included myoclonic seizures, tonic clonic episodes and arm jerks. Now, on a good day, she has a handful to none. On a bad day, Zoey might experience 100 seizures.

But there are periods when Zoey has no seizures at all. At one point after moving to Colorado and undergoing the medical marijuana treatments, the little girl was seizure free for 10 days.

Those 10-day periods continue to give Mallory and her family hope, the same type of hope that Oklahomans will one day get a chance to pass medical marijuana and give all medical refugees a chance to return home for good. 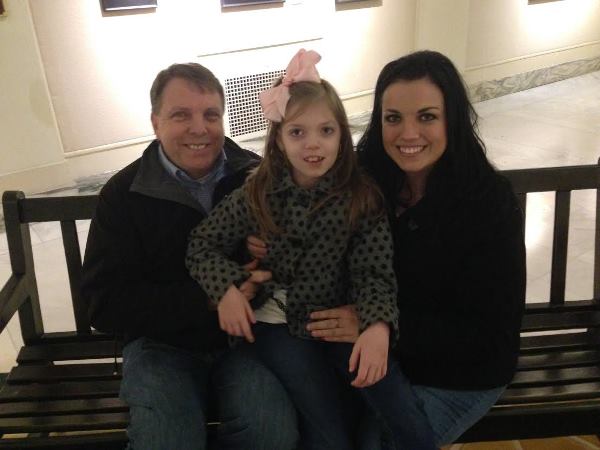