Olympia Hempfest Will Celebrate Marijuana Pride And Activism This Weekend

Washington State - The annual Olympia Hempfest returns this weekend to celebrate all things cannabis. The free event runs 11 a.m. to 7 p.m. Saturday and Sunday at Heritage Park in downtown Olympia. The buzz surrounding legal marijuana could boost attendance this year, said organizer Russell McGregor, who expects at least 2,000 people each day. "It's a good event if you've never been around cannabis or marijuana," said McGregor, who owns the Green Monster Club collective garden in Tacoma. "There will be people who can educate you on the pros and cons."

The event includes glass pipe vendors, speakers, live music, informational booths and more. McGregor likens Hempfest to a free speech rally that pays tribute to a versatile and often misunderstood plant. "Hemp is used for food, fuel, paper, clothing. It's been around for centuries," he said. Smoking pot in public is illegal and strongly discouraged by Hempfest organizers. However, one of Hempfest's main sponsors, Rainier Express, will host a "medication station" where verified medical marijuana patients can safely smoke inside a 20-by-20-foot tent. The Olympia dispensary will offer free samples to qualified patients, said owner Patrick Seifert. Rainier Express is also providing marijuana pride flags for guests at the Governor Hotel to hang from their windows.

"The vibe I'm sure will be different," Seifert said of this year's Hempfest and the effect of new recreational marijuana outlets. "Ever since those stores have opened up, I get two or three calls a day from people asking if they can get in without a (medical authorization)." Olympia Hempfest is also about advocacy. Seifert expects the state Legislature to regulate the medical marijuana industry, which currently operates in a legal gray area that's separate from the recreational industry. In response, Seifert co-founded the Washington chapter of Americans for Safe Access (ASA), which will have an information booth at Olympia Hempfest.

Although he is fine with taxes and new rules, Seifert fears that regulations similar to those placed on recreational marijuana could ultimately hinder his cause on the medical side. "We're going to have representation at the Capitol every single day," he said. "They need to form a bill that's good for patients and not just good for tax revenue. Just don't make me close my doors and go through a lottery."

One out of five patients at Rainier Express is a veteran, said Seifert, who served in the U.S. Marine Corps during the first Gulf War. Seifert said he provides free medical marijuana to veterans of all ages, including some who fought in World War II. Dozens of photos of U.S. veterans from all eras line the walls at the dispensary on Legion Way in downtown Olympia. Many veterans use marijuana to treat post-traumatic stress disorder, Seifert said, and some veterans are homeless. "Anybody that was willing to sign their name on the line and put their life in danger for the United States automatically gets your respect," he said. "In the nearly three years I've been here, I've seen what this medicine does for people. This is the most fulfilling job I've had in my life." 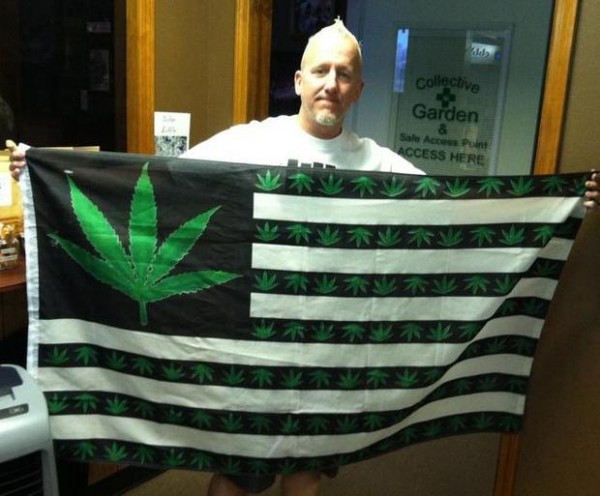 Hempfest Ad on Bus Criticize by Some