Connecticut - The seeds that will grow into a medical marijuana crop are in storage, and David Lipton, managing director of Advanced Grow Labs, says his company should begin selling its products by November. Since February, when his and four other companies received approval to grow cannabis, Lipton has been running about, watching the warehouse at 400 Frontage Road turn into an air-filtered, doubly-secure marijuana-growing facility.

"We just got approved from the state the other day ... to start our seeds," Lipton said Friday on a tour of the site, amid workers from Milford's Olympus Construction and his security team. The job has been a sensitive one; Lipton is not allowed even to say where the seeds are kept. While he says "it's really like they're treating all the pharmaceutical companies," he's really dealing with much more because of the "highly regulated and controversial field" he's entered. Lipton is used to that. Up to now he's run a chain of women's health clinics that provide abortions. Before he decided, on the suggestion of a friend with epilepsy, to try to get into the medical marijuana business, "I had about zero experience with anything cannabis-related."

Starting Advanced Grow Labs, along with silent partners, meant "hiring the right people," including a team of horticulturists. They'll market their products to the state's six dispensaries, one of which, Bluepoint Wellness of Connecticut, is located in Branford. There were about 2,000 patients registered with the state to be able to buy medical marijuana, according to the state Department of Consumer Protection. While the rooms at the site are either empty or cluttered with construction equipment, they each have a function and a name. The plants' first stop is the "genetics room," where several varieties of marijuana will be grown and cross-bred. "Our mothers," as he calls the female plants, "will reside in this room," with light 18 hours a day, Lipton said.

From the genetics room, cuttings are taken to one of four flowering rooms, where they are planted and cultivated under 50 lights per room. Here, too, lights are glowing 18 hours a day. The flowers will go back and forth between the bulk-processing and drying rooms as they cure. In these rooms, the light will be cut to 12 hours a day. The amount of light is critical. "It's when you change the light cycle, that's what initiates the flowering," Lipton said.

Finally, the flowers will be ground up and tested by a lab, steps required by the Consumer Protection Department, Lipton said. "They want all the product to be homogenized," he said. Different strains will contain different levels of the cannabinoids, including THC and CBD. "I think people will be trying different products to see what helps with their ailments," Lipton said.

Unlike places such as Colorado, patients – who include those suffering from cancer, epilepsy, glaucoma and other conditions – will not buy whole buds but rather ground-up cannabis or products made from oil extracted from the plants. Brownies and cookies will be sold to the dispensaries, as well as tincture that can be used in e-cigarettes, pills and creams. The environment is highly controlled, with air filtered as it enters and leaves the facility. Workers will be given pocketless uniforms and will have to take an "air shower" before they enter the cannabis rooms. And there are two distinct security systems.

"Security is a huge component of how we're operating our facility," Lipton said, with both cameras and motion sensors visible throughout the 26,000-square-foot plant. "We're taking every measure to be as clean and stable as we can," he said. There are some things Lipton doesn't like to talk about, including his bank. Since marijuana, medical or recreational, is still illegal on the federal level, companies like Advanced Grow Labs have had difficulty with finances.

"We're very lucky," Lipton said. "We do have a banking relationship that is 100 percent fine" with the business. He admitted, however, that the financial piece has "been very hard." Connecticut is one of 23 states, plus the District of Columbia, where medical marijuana is legal, according to procon.org. On Thursday, U.S. Sen. Rand Paul, R-Ky., filed an amendment to a bill that would shield states, patients and doctors where medical marijuana is legal from federal prosecution, according to the Huffington Post. 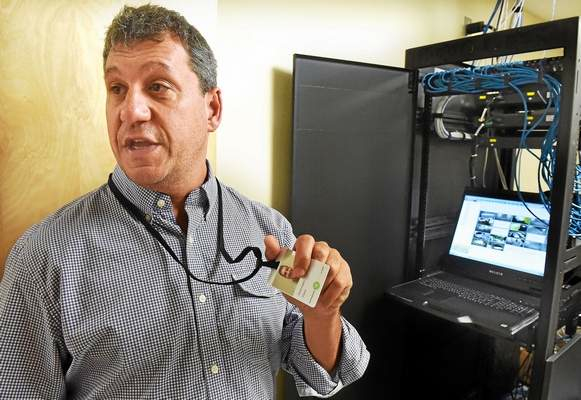