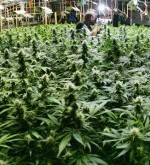 An electric float switch is an alternative to float valves and controller buckets (for which there already exists a GROWFAQ entry for External Reservoir and Control Bucket). They do not rely on gravity to supply water, so the reservoir can be placed anywhere that is convenient (at any height). Float switches are easy to install and involve no plumbing or extra buckets. They do, however, require some extra hardware:

1. a relay [$6]
2. a (cheap) submersible pump [you select]
3. an external reservoir of water/nutrient (plastic garbage can)
4. a hose to deliver the nutes to your hydro system.
5. DC power supply (like from an old discman or something)

A float switch mounts inside of your hydroponic system. It gets connected to a relay which, in turn, controls the flow of AC current to an external pump. This pump sits inside an external reservoir which can be located anywhere that’s convenient. Let’s begin. Here’s a float switch a purchased for $6 + shipping from online auction. Search Ebay and you will find some too.

Notice the top unscrews to allow the switch to be mounted as I have shown in the second picture. You will need to find something you can attach the switch to which will put the float at roughly the height of the nutrient in your system. (I used a yogurt cup and this was perfect for my 4″ Shallow water system.) The switch, mounted on a holder of some sort is then placed into the hydro system. [photo #3] We’ll worry about fine tuning the float height later. First we’ll get things working.

Next we need to understand how the circuit works. The drawing shows how the relay, float switch, and power supply get wired together. One of the power supply’s wires directly feeds the float switch. Another wire runs between the float switch and the relay(DC side). The last wire connects the relay(DC side) to the other power supply wire. The AC side of the relay connects to the two wires coming from your pump. alternately, you can attach the two wires (power and ground) from a power strip to the relay. This will allow you to plug your pump into the powerstrip sockets, instead of having to strip the wires off your pump.

Note that the reservoir can be placed anywhere, but to avoid the problem of water continuing to siphon out of the reservoir and into your system after the pump shuts off, make sure the water is being pushed up to your system. That is, make sure the outlet of the hose is above the height of water in the reservoir. [Experiment with this and please get it right, so you won’t blame me for flooding your house/apartment!] A simple way to accomplish this is to allow the incoming water/nutrient to pour into a standpipe of some sort (open on top to the atmosphere) which channels the water into your system.

This topping method works fabulously well for me. It allows the reservoir to be far away from my hydro system, on a cool floor in fact, requiring no space in the growroom. The res. can be placed at any height that’s convenient, unlike with gravity fed, float valve topping method. I find that float switches are easier to setup and less prone to failure than float valves. On the downside, you will need a pump and some other parts to set up your float switch controller. However these parts are fairly cheap and can be found at surplus stores like All Electronics Corp – Parts, Supplies and Components . Total cost excluding pump and power strip: $15-20.

Building your own Inline Fan