Wanda Beattie, president and CEO of Atlantic Healing Hemp, paces the floor of her flagship store in Berwick, Nova Scotia. She is a woman on a mission. The shelves around her are lined with hemp salves, hemp balms, cold-pressed hemp seed oil and vacuum-sealed bags of crushed hemp seeds. The hemp is top quality and Canadian grown, but it’s definitely not local—and that’s something Beattie would like to change.

“At the moment I’m bringing in hemp oil in large quantities from Winnipeg,” she says. “That’s the hemp heartland. There was an attempt to grow hemp in Nova Scotia, back in 2000, but it wasn’t feasible because there wasn’t a market for the product. There was some amateur processing being done, but nothing of any scale.”

Beattie’s mission: to resurrect the deep-seeded relationship between Nova Scotia soil and hemp.

“The issue is not related to soil,” says Beattie. “There is wonderful soil here in the Annapolis Valley. You can grow hemp here. Top quality hemp. In 2000, Nova Scotia farmers proved it could be done. There’s simply not enough of a market.”

The hemp plant has had many uses. Christopher Columbus swore by hemp sails. Hemp rope, even 50-year-old hemp rope, is still highly sought after for its water-resistant qualities. Anything oil, lumber or cotton can do, hemp can do better. The seeds can be eaten or pressed into oil. Both methods of ingestion are extremely healthy.

As Beattie will tell you, hemp seeds contain all the essential fatty acids. Her hemp cream also goes on smooth after a shave.

Re-education is a large part of Beattie’s campaign to get hemp back into the Nova Scotia diet and consciousness. She and her husband Brian offer weekly, one-hour information sessions out of the Berwick store. She also offers free presentations to Nova Scotia groups and businesses.

“People in the area just don’t know about the benefits of hemp. We grew up in a generation that didn’t hear anything about hemp. Consumers are looking at our products now, and they know they have a value, because they have been used for thousands of years. Younger people are using hemp as a preventative, incorporating it into their diets to stay healthy.” Others use it to treat chronic health issues like sciatic nerve pain, eczema, psoriasis, arthritis, acid reflux and to lower chloresterol levels.

Hemp was banned in Canada and the US in 1938. Jack Herer, in his book The Emperor Wears No Clothes, highlights the link between DuPont’s patenting, that same year, of the processes of making plastics out of petroleum and paper out of wood pulp, and the continent-wide ban on growing hemp. In 1998, amid growing interest in textile alternatives, Health Canada lifted its ban.

Hemp requires a relatively small up-front investment for processing infrastructure. Compared to oil, pulp and cotton, hemp is of higher quality and is much cheaper. Hemp is therefore a logical alternative to many of the products the Western diet currently consumes at an alarming rate.

Travis Truso is the owner of Hemp Haven in Regina, Saskatchewan. He has been in the hemp selling business for six years, and he is the main contact for the Saskatchewan Hemp Association.

“I’ve talked to 100 farmers in Saskatchewan and Manitoba, and only one of them even baled his stalk,” says Truso. “The rest just burned their stalks or cultivated them back into the soil. Ninety-nine per cent of farmers are just selling their hemp seed. There is zero industry in Canada for fibre and stalk.”

The fibre and stalk of the hemp plant is where so many of its benefits are found. When processed, the fibres and hurd (stalk centre) can produce a multitude of products.

“There are quite a few encouraging things going on in Canada with hemp right now,” says Truso. “Motive is a car company out of Alberta. They just created an electric car, and the body of the car is made out of hemp composite. The car has been reviewed really positively, and they want to commercially launch it by 2013.”

“I see hemp fibre board as being a very promising industry with lots of room to grow,” he says. “Right now the government annually subsidizes the lumber industry with $1 billion of taxpayers’ money. You cannot produce paper from lumber for the price we buy it at in the store. The entire industry is subsidized. And once you cut a forest down, your next crop isn’t ready for 100 years. Why have we built a society that takes trees for paper? It’s insane.”

“The absurdity of growing cotton for textiles… Pests love it, and the only way it could have evolved was through intensive labour. Cotton needed slave labour to evolve. And then the product is just a short, brittle piece of fibre that wears out in a year. Hemp makes the strongest fibre, and it doesn’t wear out, it wears in. Levis jeans were originally made from hemp.”

“Henry Ford grew hemp, and his first diesel engine ran off hemp oil at 90 per cent cleaner and 60 per cent more efficient than fuel oil. It’s got the most biomass per crop, per acre, of anything grown.”

Hemp is also one of the greenest crops grown. “All the farmers that currently grow hemp in Saskatchewan do so keeping organic practices in mind,” says Truso. “They are growing it in rotation with wheat, rye and grain crops. Hemp pulls an enormous amount of toxins out of the soil, and I’ve got it from a representative from Health Canada who says that if hemp were grown in three consecutive years on the same land, that land would be free of other weeds. You can virtually drop the seed in the soil, come back in 120 days, and combine your yield.”

Canadian law, however, makes it hard to be a hemp farmer. “Hemp is the only legal crop in Canada that requires a license to grow. You have to go through so much paper work. You need to have a criminal check, and you need to have your crops tested for THC content twice yearly. For a lot of farmers, the hassle is just too much.”

Processing the stalk, on an industrial scale, requires a processing plant, which would cost several million dollars—so far a prohibitive sum for investors. Various levels of Canadian government have had several opportunities to build a Canadian hemp processing plant, and each time they failed to seal the deal.

Truso talks about one that got away.

“In Craik, Saskatchewan, a company called Natural Alternative Technologies (NAT) approached the town with the idea of building a hemp processing plant. That was in 2004. At that point we had a New Democratic government in Saskatchewan, and they were for it. They offered up half the capital for the plant if NAT could raise the rest.

“From 2004 to 2008, NAT developed its technology, and raised its capital. In 2008 Saskatchewan elected the Saskatchewan Party, which is a far right party. In their first week of being in office they cancelled their contract with NAT. Since then NAT has gone bankrupt, and has sold its technology to Haines Underwear.”

Despite growing almost 20,000 acres of hemp, Canada remains without a plant to process it. Canadian hemp stalks, for lack of a buyer, are burned. Hemp-stalk products, among them hemp textiles, are largely imported from China.

“Almost every Canadian designer that’s manufacturing hemp clothing is getting their yarn from China,” says Truso. “The floor of my store is made from hemp fibre board. It’s twice as strong as plywood and will last twice as long. I bought it imported from China.”

Without government assistance, and without a processing plant, hemp farmers across Saskatchewan are still growing over 5,000 acres of hemp. Only the seeds are being harvested.

“There are no government subsidies for hemp seed,” says Truso. “The farmers need to go out on their own, and find all of their own contracts. At the end of the year, a lot of them still have 50 to 100,000 pounds of hemp seed left over.”

Truso says any initiative for processing stalk will have to come from the grassroots. “A company called Hill Agra in Ontario has invented a portable fibre extractor that can fit behind any tractor. The base model sells for $80,000. Several have been sold to Europe, and quite a few to China, but so far none in Canada. In the spring this extractor would decorticate your fibre and your hurds [process the stalk]. You’d be ready to stamp fibre boards. You’d be ready to mix hemp concrete.”

“And,” he adds, “hemp is still illegal to grow in America, so you’d have a huge market for your product. You’d be creating a groundbreaking industry.”

For more information on applying to grow your own hemp, contact the Controlled Substances Division of Health Canada, at 1-613-948-6408. 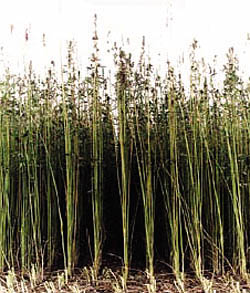