Under current U.S. drug policy, all cannabis varieties, including hemp, are considered Schedule I controlled substances and are regulated by the Drug Enforcement Administration. Despite its domestic illegality, the U.S. imports hemp, grown as a legal agricultural commodity in countries around the world, to the tune of $500 million a year.

Hemp is a lucrative crop not only because of demand forces (there are an estimated 50,000 industrial applications for the plant), but because it’s easy and cost effective to grow. Hemp requires few inputs, dramatically undercutting traditional agricultural costs like pesticides and water and, with a harvest cycle of 120 days, farmers can reap several crops in one year.

And yet American farmers cannot grow hemp. Since the Marihuana Tax Act of 1937, hemp and marijuana have been included in federal drug prohibitions that demonize all things cannabis through anti-drug policies and harsh criminal penalties.

In recent years, federal language has evolved to recognize the distinction between hemp and marijuana, and Congress has included amendments creating exceptions to prohibition laws. For example, universities can now apply for permits to research hemp and, in certain states, individuals and businesses can grow small parcels of hemp with special permitting.

But such exceptions to the rule do little to create an equitable industry and in many ways extend the advantages of special interests, albeit new ones, by creating limited access to hemp for a select and small group of people, doing more to repeat history than to right it.

Offering the most significant hope of change is the Industrial Hemp Farming Act, introduced earlier this year. If passed it would lift the federal ban on hemp and leave the decision about whether to allow its cultivation up to each state. This legislation is gathering support from both sides of the aisle, but is met with skepticism that stems from almost 80 years of misinformation and political, anti-cannabis propaganda.

Last month Rep. Jared Polis (D-Colo.) and two representatives from Oregon introduced a resolution to address this obstacle, recognizing June 6 to June 12 as Hemp History Week. The designation would commemorate the historical relevance of industrial hemp in the United States and promote the growth of the industrial hemp industry.

This savvy political move seeks to affect popular understanding through conversation and education by appealing to the legacy of the country’s founding fathers and their relationship with and dependence on hemp.

“Hemp played a critical role in the development of our nation,” Polis said in a public statement. “It’s time that we recognize the cultural and economic importance of hemp; while realizing that it shouldn’t only be viewed as a product of the past, but a resource for the future.”

Greta Gaines, owner of skin-care company The Hempery and long-time activist in the hemp industry, speaks often about the historical relevance of hemp to this country, but she doesn’t want the history lesson to end with such romantic waxings on the good old days.

“Sure, there would be no America without hemp, and if you don’t understand that then you can’t really call yourself a patriot,” Gaines says. “Hemp allowed America to win its independence and was vital in forming the early colonies and in getting us through the Second World War. And yet we allowed it to get thrown out – all because a few corrupt, amoral industrialists decided that it was bad for their business.”

For Gaines, hemp is more than just a crop; it represents a different idea of independence, one in which livelihood exists firmly in the hands of the American people, in a democracy that isn’t just political but economic.

She calls the Marihuana Tax Act the “greatest heist of a natural resource in human history.”

Historical interpretations like Gaines’ are often dismissed as conspiracy theories or as ways to cover up the racist history of drug laws. To be sure, in telling history one is telling a narrative that operates from a single vantage point, which is necessarily biased. But Gaines is steadfast in uncovering alternative histories that have been suppressed for too long at the expense of people and environment.

History, she says, is important not just because we learn from our mistakes, but because it contributes to our moral understanding and is critical in creating a more informed and responsible citizenry.

“My goal is to get people to realize that we have been duped and to get them angry,” Gaines says. “If we don’t fight to right history then history will just get written by the people who were there with the pen and paper and with the motive to write it down. If you are not there to stand up and be counted and to fight, no one is going to change anything.” 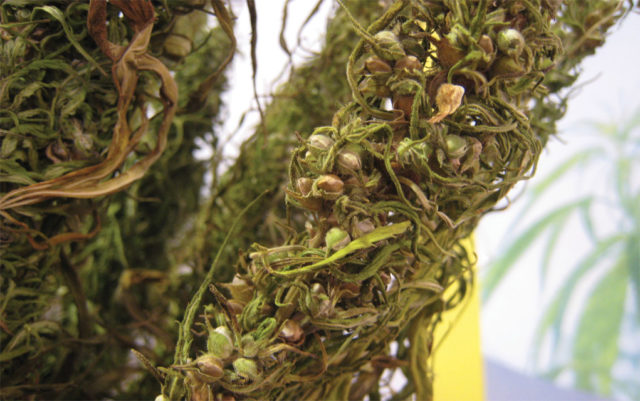