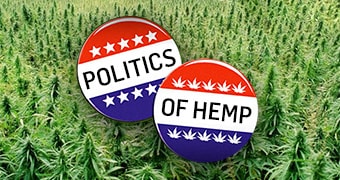 For nearly four decades, industrial hemp advocates have extolled the virtues of hemp (cannabis sativa, variety sativa), a plant whose cultivation is still banned in the US, thanks to its scandalous distant cousin, cannabis sativa, variety indica. The latter is the source of the illicit drug marijuana. The former produces good quality fiber and has a tetrahydrocannabinol (THC – the psychoactive ingredient in marijuana) concentration of 1% or less. The latter produces negligible usable fiber and has a THC concentration of 4-20%.

Hemp happens to be one of the most versatile plants known to man. Hemp fiber is used in the production of paper, textiles, rope, sails, clothing, plastics, insulation, drywall, fiberboard and other construction materials; while hempseed oil is used as a lubricant and base for paints and varnishes, as well as in cooking and beauty products. The hemp plant, a “bioaccumulator,” is also used in phytoremediation. This is a process that uses living plants to remove nuclear contaminants and toxic chemicals from soil. Massive hemp fields were planted in the Ukraine following the 1986 Chernobyl disaster, to soak up radionucleotides.

I recently became interested in the importance of hemp in green technology following the relocation from Ashville North Carolina to New Plymouth (New Zealand) of Hemp Technologies, a construction company that produces low-cost, energy efficient hemp homes and construction materials. Up until the 1990s, interest in industrial hemp was limited to the movement seeking to legalize marijuana. However growing public concern about the need to urgently reduce fossil fuel use (both to reduce carbon emissions and to conserve dwindling reserves) has given industrial hemp a major shot in the arm. Because hemp cultivation is still illegal in the US (except for the Pine Ridge Reservation and small “research” plots), the US is the world’s largest importer of . Ironically they import most of it from the their main economic rival, China, which is also the world’s largest producer. This is yet another example of how communities, small businesses, and states are leaving behind a short-sighted, corporate controlled federal government and forging ahead to save their communities and the planet from economic and ecological collapse.

In fact hemp-based paper, textiles, rope, construction materials and even plastics are the tried and true low tech alternative to modern synthetics that consume large quantities of fossil fuel during manufacture. Prior to the industrial revolution, the vast majority of textiles, clothing, canvas (the Dutch word for cannabis), rope and paper was made of hemp. It was only with the industrial revolution and the proliferation of machinery run on cheap fossil fuels that more sophisticated alternatives, such as cotton, wood-based paper, and eventually petroleum based plastics became cheaper alternatives. Prior to the invention of the cotton gin in the 1820s, 80% of the world’s textiles, fabrics, and clothing were made of hemp. By 1883, hemp was still the primary source of 75% of the world’s paper. Prior to the crippling hemp tax the US government passed in 1937, most bank notes and archival papers were made of hemp (owing to its greater durability) and most paints and varnishes were made from hemp seed oil.

Hemp has always been such a vital community resource that a long series of laws, dating back to Henry VIII (1535) required farmers to grow hemp or be fined. In 1619 Jamestown Virginia enacted a law requiring residents to plant hemp. Massachusetts and Connecticut passed similar laws in 1631 and 1632. Betsy Ross’s flag was made of hemp. The Declaration and Independence and Emancipation Proclamation are printed on it.

A Better Carbon Sink than Trees

A hemp crop takes approximately four months to reach maturity. This contrasts with twenty years for the fastest growing trees. Hemp absorbs four times as much carbon dioxide and produces four times as much raw fiber (per unit weight) as trees. In addition to its low carbon footprint, hemp has a number of other advantages over the synthetic and highly processed products that have replaced it.Paper manufactured from hemp is finer, stronger and lasts longer ). Likewise, hemp-based products used in home construction are unparalleled thermal insulators, as well as being non-toxic, waterproof, fireproof and insect and mold resistant.

Prior to visiting the Hemp Technologies website, I was under the mistaken impression that hemp was mainly used for home insulation. I was very surprised to learn that hemp (in the form of HemPcrete) can be used in the construction of the outer walls, as wall as a non-toxic replacement for drywall (Magnum Board). In addition Hempboard (100% hemp) is an inexpensive, non-toxic replacement for fiberboard in interior paneling, countertops, shelving, sheathing and furniture.

The Decline of Hemp

Hemp first began losing ground in 1850 to cheaper substitutes made of cotton, jute, sisal and petroleum. Prior to the 1920s, hemp had to be processed by hand, involving huge labor costs incompatible with mass commercial production. Henry Ford, one of the first modern conservationists, remained a strong hemp advocate and had his own hemp plantation on his estate in Dearborn Michigan. The body of his 1908 Model T was made of hemp-based plastic, which has far greater tensile strength and durability than steel. After George W Schlicten automated hemp processing in 1917 with a new machine called the hemp decoricator, Ford set up the first biomass fuel production plant in Iron Mountain Michigan. Ford ran the first Model T on corn-based ethanol (alcohol), but was quick to recognize hemp as a cheaper and more efficient fuel source. His engineers in Iron Mountain developed processes to extract not only ethanol from hemp, but charcoal and other industrial chemicals, including tar, ethyl acetate and creosote. The 1919 Prohibition against alcohol, coupled with the growing political power of the oil lobby, derailed Ford’s plans. By 1920 gasoline had replaced ethanol as the auto fuel of choice.

All this was happening at the precise moment that the munitions company DuPont was patenting synthetic fibers (nylon, rayon, Dacron, etc) and plastics derived from petroleum. Schlicten’s hemp decoricator and automated hemp processing, posed a major threat to DuPont’s ability to market their synthetic fibers for products previously made from hemp. DuPont also had a commercial interest in promoting wood-based paper production (they held the patent on the sulfates and sulfites used to produce paper pulp) and gasoline. They also held the patent on tetraethyl lead, which allowed gasoline to burn more smoothly in the engine Ford intended to run on ethanol.

The main co-conspirators in the plot to kill hemp included DuPont, William Randolph Hearst (who owned a logging company and paper manufacturing plant in addition to his American newspaper empire) and Andrew Mellon, president of Mellon Bank and DuPont’s major financier. In 1930, Mellon, as US Secretary of the Treasury, created the Federal Bureau of Narcotics and appointed his nephew Henry Anslinger to run it. Between 1935 and 1937, Anslinger and a handful of DuPont’s cronies in Congress secretly wrote a bill to tax hemp production. Meanwhile Anslinger and Hearst orchestrated a massive media campaign demonizing a dangerous new drug called marihuana that supposedly turned Mexicans and black jazz musician into crazed killers. Congress was also deliberately tricked into believing marihuana was a totally new drug. The Marihuana Tax Act of 1937 was rushed through on a Friday afternoon before any lawmakers had a chance to read it. Only a handful realized marihuana was the same as hemp, which was still viewed as an essential crop and vital to the paint and varnish industry.

Between 1941 and 1945 the Marihuana Transfer Tax was waived, after Japan embargoed the sale of hemp, jute and other fibers essential to the war industry. The US government once again encouraged Americans to grow hemp for patriotic reasons. Farmers who planted it were exempted from the draft. Hemp was legally grown in Minnesota as late as 1968. In 1970 the Controlled Substances Act officially equated hemp with the drug marijuana and help cultivation became illegal. This was the same year the 1937 Marihuana Tax Act was declared unconstitutional.

The use of hemp dates back to 10,000 BC in TaiwanHemp as a Tobacco Replacement Crop

With the recent anti-smoking movement and declining cigarette use among Americans, many tobacco farmers export as much as 85% of their crop to China, India and Eastern Europe, which have laxer antismoking laws. However, with tobacco exports declining more than 50% since 1996, hemp is high on the list of possible replacement crops. Nothing is as big an earner as tobacco, which currently grosses approximately $1,500 per acre. Processed tomatoes are worth $775 per acre, while other food crops bring in much less, around $100-200 per acre. Industrial hemp earns $200-500 per acre, depending on the quality of the fiber. This is expected to increase as demand increases.

Thus it’s no surprise that many tobacco states have enacted laws legalizing hemp production, in anticipation that Congress and the Obama administration will come to there senses. The states authorizing industrial hemp cultivation are North Dakota, Hawaii, Kentucky, Maine, Oregon, California, Montana, West Virginia and Vermont. North Carolina, another tobacco state and the home of Hemp Technologies and the first American hemp houses, has passed a bill to “study” possible legalization.

Why the DEA Opposes Hemp Legalization

The main justification the DEA and Department of Justice give for continuing the ban on hemp is that law enforcement officials have difficulty distinguishing between hemp and marijuana. Given that police in other countries where hemp cultivation is legal (Canada, China, New Zealand, and many parts of Europe) have no difficulty distinguishing between the two cannabis sativa varieties, this is a serious insult to the intelligence of American police and drug enforcement officials. Hemp is a tall, skinny plant with few major branches below the primary branches at the top. It’s grown in rows a foot apart. Marijuana plants, in contrast, are short and bushy and must be spaced six feet apart for optimum growth. Even the leaves are different. Hemp has seven long thin leaflets and marijuana five leaflets, with three of them nearly twice the width of hemp leaflets.

It should be a no-brainer. We are talking about revenue neutral environmental/sustainability legislation (revenue positive if it leads to new jobs and taxpayers) – the cost to the taxpayer of repealing this ban is zilch. The benefits are far too numerous to list in their entirety. Besides greatly reducing transportation and other import-related costs, we provide a great boon to financially struggling tobacco farmers and states, while offering homeowners a low cost energy efficient building and insulation material that helps conserve increasingly scarce forest lands.

In May 2011, Republican presidential hopeful Ron Paul and 25 cosponors introduced the 2011 Industrial Hemp Farming Act Bill (for the fourth time). It’s clear from the list of states that support hemp legalization that this is a non-controversial bipartisan issue. I can’t imagine any legitimate (i.e. rational) reasons why Congress and Obama would be blocking its passage – or why such an important Bill should go unreported in the corporate media. Presumably the reasons are political. In other words, some as yet unidentified corporate lobby opposes it because it threatens their financial interests.

I won’t speculate which one(s). However it’s pretty obvious why Hemp Technologies is moving to expand into Canada and New Zealand, where hemp cultivation is legal. America’s loss is our gain. 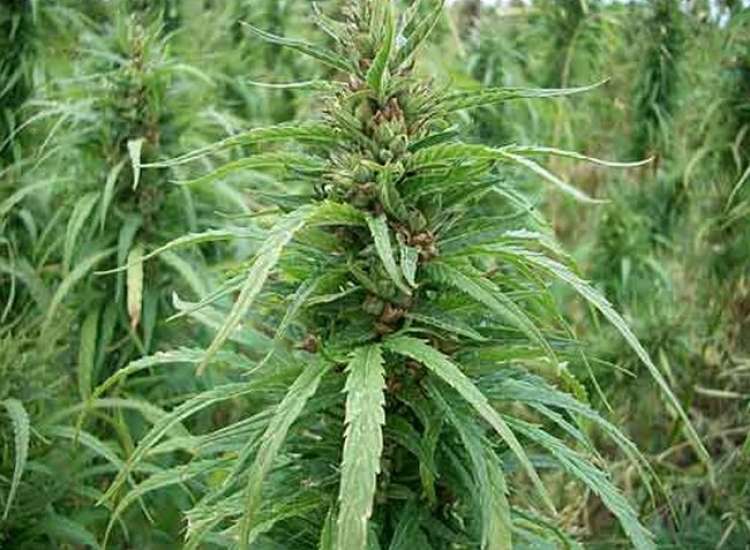