For a long time, there were no marijuana brands. Cannabis growers spent so much time trying to conceal their identity from law enforcement and potential thieves that it simply made no sense to create distinctive packaging that would make it easier to track their product. Weed nerds might recognize strains, or whether something was Indica, sativa, or hybrid, but for casual users, these categories were largely inscrutable.

More than a decade later, widespread legalization has led to an explosion in cannabis brands. There are high-end artisanal chocolates and celebrity-endorsed product lines and medicinal tinctures named after sick children. But truth be told, most of us are still living with that same fundamental uncertainty behind what we are buying.

Case in point: where in the world is our pot even coming from? Whether you’re picking up fancy edibles in Colorado or stale buds in a baggie from a dealer, the forces of the black market are so strong that it’s basically impossible to know for sure who is responsible for the stuff that’s getting you high.

Now, the state of California is introducing a new challenge in marijuana monitoring: honest labeling regarding your pot’s county of origin. Pretty soon it will be illegal for operators to say that their cannabis was grown somewhere it wasn’t. That’s right – appellations are coming to California cannabis.

The people who have pushed hardest for these new regional branding rules mostly hail from Northern California, where the country’s most ambitious drug dealers and self-reliant hippies have long hidden out in the hills to grow massive quantities of marijuana. Many old-school cannabis farmers are hoping to exploit the region’s reputation for quality ganja with state-certified appellations, ensuring that – like Champagne or Bordeaux wines in France – anything labeled Mendocino pot is truly from Mendocino.

For now, however, none of the marijuana farms in California have been officially licensed by the state, and the elaborate regulatory system won’t be fully implemented for at least another year. Suffice it to say I still frequently find myself looking at fancy packaging and wondering whether the pot inside matches whatever it says on the outside. Strains are often mislabeled, based on what budtenders think customers want, and the Indica/sativa/hybrid distinctions are increasingly proving to be meaningless. So for now, the claims certain companies are making about who grew something and where are downright impossible to prove.

Take, for example, a popular line of vape pens from a company called hmbldt. Time Magazine named this product one of the 25 best inventions of 2016, and for good reason. The pen vibrates after you’ve inhaled a 2.25-milligram dose, and each pen is meant to create a specific experience, like “Bliss” or “Passion” or “Calm.” They’re a little expensive (About $100, roughly twice as much as other vape pens), but they generally produce the intended effect. I’ve used the “Sleep” pen to go to bed before, and it worked like a charm.

Of course, the product makes explicit reference to Humboldt County, one of the most legendary cannabis-producing regions in the world. There are other cannabis brands seeking to profit off of the county’s famous name, including True Humboldt and Humboldt’s Finest. But hmbldt has the distinction of not being run by people from Humboldt – a fact that has left some people in Humboldt rather annoyed. (One co-founder did grow up in Humboldt, but he is no longer with the company.)

“People are claiming to be something that they’re not,” says Dani Burkhart, a founding board member of the Humboldt Cannabis Chamber of Commerce, who is currently running for County Supervisor. “It’s really important when you have a craft product to have something that protects branding rights. In California, you can’t call wine that’s not from Sonoma, ‘Sonoma Valley Wine.'”

When hmbldt first launched in August 2016, its founders told me that the hash oil in their pens came from marijuana grown in Sonoma, Mendocino, Humboldt and Trinity counties. At that point, protection for regional cannabis appellations had been included in the medical marijuana regulatory bills that passed the legislature in 2015, but the law seemed to imply that only the usage of a county’s full name would matter – with no guidance on what might happen if some business took the vowels out of a word. Then, this past summer, the state government made the situation much clearer, affirming the portion of last year’s legalization ballot initiative that prohibits licensed businesses from using any “representation which tends to create the impression that cannabis originated in a particular place or region, unless the label of the advertised product bears an appellation of origin.”

Now, the company insists that all of its product is sourced in Humboldt County – though there is no real way to verify that claim. Again, pretty much none of the marijuana in California is being tracked right now. And in a recent interview, hmbldt chief marketing officer Derek McCarty tried to downplay the importance of the company’s name. “We are by no means the only company that has a nod to that area, and even so, our nod is a bit tangential. We’re a bit distant from it,” he says.

But for the cannabis farmers living in Humboldt, naming is everything. The county was the first in the state to pass a local ordinance that created a commercial permitting process for legal weed, and is therefore far ahead of places like Los Angeles in terms of bringing its marijuana economy out of the shadows. Many locals are grateful for the head start, and are counting on appellations to help distinguish and protect the region’s cannabis cultivators from a coming wave of larger and more corporate pot businesses. Last year, Ryan Stoa, an associate professor at Concordia University School of Law, argued in the Harvard Law and Policy Review that appellations are a small cannabis farmer’s best defense against Big Marijuana.

“For us, appellations are about realizing the way the practices we use make us different from large scale commercial farming,” says Patrick Murphy, who helped write Humboldt’s marijuana ordinance and now runs a group of over 250 growers called Emerald Family Farms. “For so long, people in this area could not be proud of themselves publicly. I’m not so keen on, say, an L.A. or Bay Area company capitalizing falsely on being based in Northern California.”

At the end of the day, I’m looking forward to that day in the near future when the state is at least trying to keep track of where my pot is being grown, and I can feel confident that the label on every jar, vape pen, and edible is correct. And if that also can help protect small farmers against big business, even better. 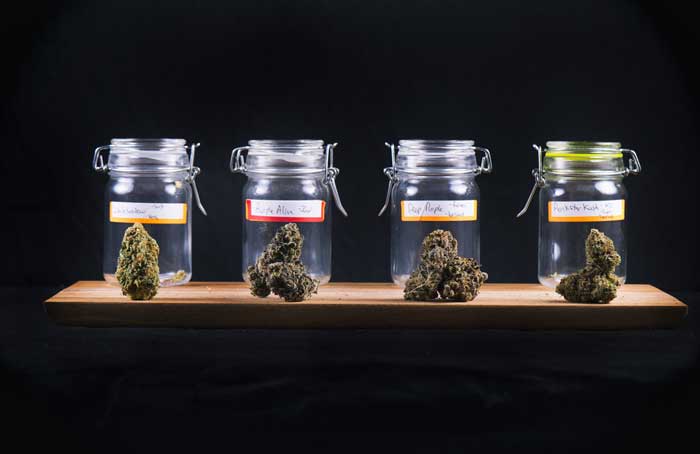