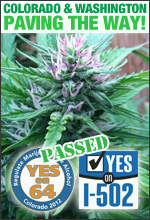 Colorado and Washington became the first states to legalize recreational marijuana in the prohibition era on Tuesday, dealing a major blow to the war on drugs. Medical marijuana was also legalized in Massachusetts, underlining long-running trends in public opinion toward more permissive attitudes on drugs. “To put this into historical context, there is no historical context,” said Tom Angell, spokesperson for Law Enforcement Against Prohibition. “It’s the first time any state has ever voted to legalize marijuana — and two of them did it.” The votes marked a significant shift from decades of tough-on-crime policies that burned through $1 trillion in tax dollars over 40 years, led to the arrest of 850,000 Americans for marijuana law violations in 2010 alone, and fueled the rise of deadly drug cartels abroad. But even as pot reformers celebrated their long-sought victories, the threat of a confrontation with the federal government loomed.

Both ballot measures would legalize recreational marijuana use only for adults, and cannabis would remain a controlled substance under federal law.

Oregon was the lone state where legalization appears to have lost, with 55 percent of voters opposed. Support there may have been hamstrung by the public profile of Measure 80’s primary backer, pot entrepreneur Paul Stanford, who was charged with failure to pay state income tax in 2011.

In California, a proposition that would reduce the severity of the state’s harsh “three strikes” law appeared to be leading in early returns, which could signal a general move toward more rehabilitative stances on criminal justice.

The successful pro-pot campaigns prominently featured the voices of law enforcement officials who testified firsthand about the corrosive impact of the war on drugs. There was no reason to prohibit marijuana, they suggested, when far more destructive drugs like alcohol were legal.

Elsewhere in the nation, voters sent mixed messages on marijuana for medical use. Massachusetts legalized medical marijuana by a wide margin, becoming the 18th state to do so. The state of Arkansas, however, failed to become the first in the south to allow cancer patients and others relieve their pain with cannabis.

But there was reason for pause about marijuana reform as signs emerged that the Justice Department could move to block key elements of the ballot measures like tax collection. On Sunday, a former senior adviser to the Obama administration’s Office of National Drug Control Policy, Kevin Sabet, told NBC News that “once these states actually try to implement these laws, we will see an effort by the Feds to shut it down.”

“The voters have spoken and we have to respect their will,” said Colorado Gov. John Hickenlooper, who opposed legalization, in a statement. “This will be a complicated process, but we intend to follow through. That said, federal law still says marijuana is an illegal drug, so don’t break out the Cheetos or goldfish too quickly.”

“What an insult to the majority of voters who did not follow your recommendation, governor,” responded Angell. “I wouldn’t be surprised to see that comment bite him in the ass.”

In both Washington and Colorado, action from the Justice Department could jeopardize marijuana tax revenues meant for state treasuries, a key element of selling legalization to undecided voters.

“Our work in Colorado and Washington is not yet done,” Angell said. “We still need to work on effectively implementing these laws … so that we can show that when you legalize marijuana, the sky doesn’t fall.”