Just 11 days into selling recreational marijuana, the Las Vegas ReLeaf dispensary, located steps from the Strip, had already run out of edibles.

“Right now, I have about 30 people in my lobby that want this edible or that edible, and we have to tell them we’re sorry,” CEO Al Fasano said Tuesday afternoon. He’s also running low on vape pens and plain, old-fashioned weed, despite packing his vault with “hundreds of pounds,” which he thought would last weeks. And until Thursday, Fasano had no way to get more.

Across Nevada, dispensaries have experienced the same problem.

The state started recreational marijuana sales on July 1 without any distributors licensed to move weed from growers to dispensaries. Although at least one distributor was finally approved Wednesday night, an ongoing supply crisis threatens to derail an industry worth an estimated $100 million dollars in taxes to the state over the next two years. The governor even endorsed emergency regulations to temporarily expand who can move recreational marijuana. In an effort to kickstart the flow, the Department of Taxation will consider that proposal Thursday.

Under Nevada’s new marijuana law, approved via ballot initiative in November, alcohol distributors were given sole rights to transport recreational pot — at least for the first 18 months of sales. But because of a court battle and a slow-moving approval process, no distributors were licensed for nearly the first two weeks of sales. As a result, supplies have dwindled, costing dispensaries sales and money. Some have even experienced break-ins that owners think are related to the weed they stockpiled in anticipation of the shortage.

Braly Joy is the general manager at Silver Sage Wellness, a marijuana wholesaler and dispensary. The dispensary-side of his business has been fine; Joy used his existing stores of medical marijuana to stock up for opening day and said he’s been able to serve around 500 people a day with a nearly full menu of products.

Still, he hasn’t been able to move any of his wholesale product to buyers, costing him about $200,000 in lost business so far. In the run-up to opening day, dispensaries started frantically calling wholesalers trying to buy their supply. Without a license, however, they have no way to legally transport their product themselves. And until the state OKs distributors outside the alcohol industry or the 18-month window runs out, marijuana wholesalers can’t apply for one.

With businesses stockpiling product, and all the media attention around the supply issues, Joy said dispensaries have also become targets for theft.

“Our vault got hit by four burglars,” he said. “They made it into our vault, smash and grab, and made it out with $50,000 worth of material.” Joy spent another $30,000 to fix his facilities, plus $10,000 in extra security costs, all before July 1. About a dozen other businesses experienced similar break-ins before opening day, according to the Nevada Dispensary Association, an advocacy group that represents over 800 of Nevada’s dispensaries.

Even without burglaries, most dispensaries are running out of recreational weed supplies — and fast, according to Riana Durrett, executive director of the Nevada Dispensary Association. She’s been keeping in touch with businesspeople on the ground.

“Mostly people are saying between a few days or up to a week or 10 days,” she said.

While the distribution issues won’t affect Nevada’s medical marijuana industry, Durrett speculated that “a handful” of recreational dispensaries could run out of weed entirely. At least one already has, according to Tim Conder, co-founder and CEO of Blackbird Logistics, which received its distribution license from the state Wednesday night.

Blackbird was the first company to get a license, according to Conder. The company handles medical marijuana logistics by trade, but given the alcohol industry’s monopoly, it partnered with a small wine company to get certified under the current legal set-up.

“We are thrilled to resume service to our longstanding clients and to begin to alleviate the product shortages statewide,” he said. “We are going to do our best to meet everyone’s needs. We want to thank the industry for their continued support of Blackbird.”

The Nevada Department of Taxation did not respond to multiple requests for comment.

Even if the department approves the governor’s emergency regulations, as many industry insiders are confident it will, weeks could pass before other businesses get licensed. And at least one alcohol distributor, Focus Distribution, has already promised to take legal action, according to Christi McDonald, the consultant handling its application for a recreational license.

In May, the Nevada Department of Taxation tried to open distribution to other businesses, but the alcohol distributors sued and won an injunction, allowing them to maintain their monopoly on transport.

“[The state] would have to approve the regulations knowing full well there was a court injunction telling basically that exact thing not to happen,” Conder said. “I’d be very surprised if alcohol went quietly.” 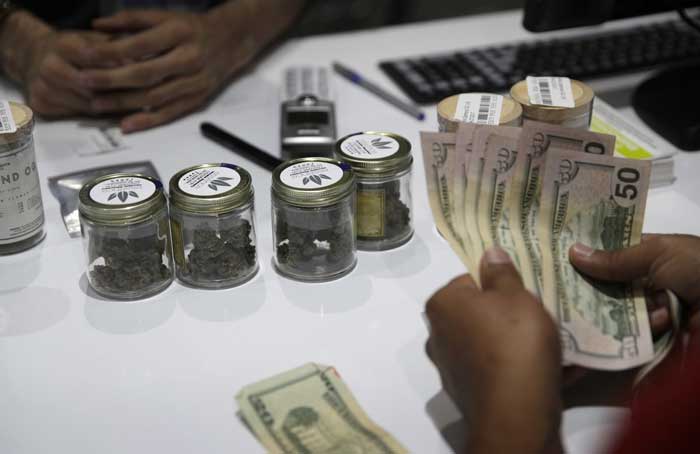 CO: Five Types Of Businesses That Could Have Pot Consumption Areas

The Pot Law That Could Be A ‘Deal-Breaker For The Drug...