About a thousand people took to the streets of Buenos Aires last Saturday to celebrate a year of marijuana activism and call for the right to grow their own plants. The march, led by student groups from around the country, ended at the Argentine Congress building, where speakers addressed the marchers. We present two-dozen+ photos from the day here, courtesy Argentine activists.

Marching behind a banner saying “No to the Drug Traffic,” the protestors criticized drug prohibition as fueling violent drug trafficking organizations. Another banner called for “An end to ignorance, the right to grow your own, and education for responsible consumption.” 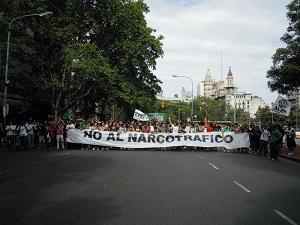