In a surprise move, Puerto Rico’s Governor Alejandro García Padilla signed an executive order legalizing the use of medical marijuana in the U.S. territory. The order, which was heavily debated in Puerto Rico since 2013 but never put to a public vote, went into immediate effect. The Caribbean island joins 23 other U.S. states in decriminalizing medical marijuana, The Associated Press reports.

“We’re taking a significant step in the area of health that is fundamental to our development and quality of life,” García Padilla said in a statement. “I am sure that many patients will receive appropriate treatment that will offer them new hope.” The governor added that several studies conducted in the United States demonstrated that cannabis can assist in pain relief from serious diseases.

“These studies support the use of the plant to relieve pain caused by multiple sclerosis, AIDS virus, glaucoma, Alzheimer’s disease, migraine, Parkinson’s and other diseases that often do not respond to traditional treatments,” García Padilla added. “This administration is committed to ensuring the health of all citizens residing in our country. Hence the medicinal use we are adopting is an innovative measure to ensure the welfare and a better quality of life for these patients.”

Although Puerto Rico will relax its stance on medical marijuana, it plans on passing a state law that will establish “a distinction between medical and non-medical uses.” Even pro-marijuana activists in Puerto Rico were taken aback by the sudden nature of the executive order, as many questions remain over how the plan would be instituted.

For instance, no decision has been made whether Puerto Rico will grow its medical marijuana crop in the country or import the drug. García Padilla said the secretary of the health department would arrive with a more detailed plan of action for medical marijuana within three months.

Puerto Rico becomes the latest U.S. territory or state to either peel back the restrictions on medical marijuana or decriminalize weed entirely. New York is readying its own (albeit restrictive) medical marijuana plan, while voters in Florida resoundingly support a measure to legalize the drug for both medicinal and recreational purposes. The federal government also ended their prohibition of medical marijuana. 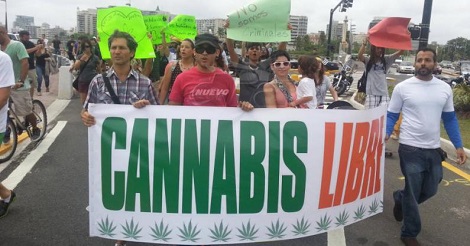