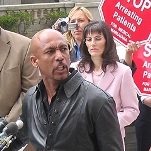 The 54-year-old Williams spoke at a news conference in Annapolis on Monday with lawmakers from both parties who support the legislation.

Williams, who was diagnosed with multiple sclerosis in 2000, said he has been living with neuropathic pain in his lower extremities, face and side for 10 years. He said marijuana provides the only relief he can find.

“I’ll come back to Maryland to help you administer this. I’ll help you put together the regulations that you’re going to need to put together to stop making the mistakes that other state’s have made, and I’ll help you form a system so patients can get off the battlefield and start living a life like everybody else,” Williams said, while tearing up.

The Maryland Senate passed a bill last year to allow physician-approved use of marijuana. The House didn’t pass the measure.

Delegate Dan Morhaim, D-Baltimore County, said this year’s bill will be similar to last year’s with some recommendations added by a House work group.

The proposal says marijuana would have to be prescribed by a patient’s physician and grown in a state facility under the direction of the state. It would also be dispensed through a licensed facility.

The writers of the bill said they feel confident about the bill’s chances, saying it has broad support.