NFL commissioner Roger Goodell said marijuana and its potential in treating football-related injuries is “a medical issue” that the league is interested in researching further.

“If pain management is something that medical marijuana can address responsibly, that’s something that our medical community is evaluating,” Goodell said Thursday at a forum at the Broncos’ Dove Valley headquarters. “We just proposed to our union in the last month or so that we put some research money behind that to see how we could implement that … if they can address pain management in an effective and safe fashion. That’s something that I assume will get a lot of discussion, but hopefully it involves a lot of research and medical opinions that can help us make the best decisions.”

The collectively bargained substance-abuse policy bans players from consuming marijuana — they’re penalized if they test positive for more than 35 nanograms of tetrahydrocannabinol (THC) per milliliter of urine — but many former and current athletes have advocated for the use of cannabinoids as alternative to potent painkillers.

The NFL Players’ Association established a pain management committee to address, among other issues, the use of marijuana as a viable and potentially safer treatment for football-related pain. In past interviews, Goodell has said the league will consider changing the substance abuse policy when research supports doing so.

Earlier this week, the NFL wrote a letter to the NFLPA to work in tandem with the players in cannabis research. According to The Washington Post, the NFL’s letter to the union outlined multiple areas for potential research, including pain management for both acute and chronic conditions.

At Thursday’s forum at Dove Valley, Goodell was asked about studies on head injuries and chronic traumatic encephalopathy, or CTE. Most recently, researchers at Boston University examined the brains of 202 deceased football players and found that of the 111 that played in the NFL, 110 had CTE, a degenerative disease that is believed to be linked to repeated blows to the head.

“We appreciate the studies and we actually not only appreciate them, we funded a lot of these studies. What we all need is more information,” Goodell said. “There is one thing that is clear among this medical community, that we have a lot more questions than we have answers. We need more research and I think we have led the way on that front. We’ve not only led with research, but we’ve led with rule changes to our game, we’ve led on awareness to the injuries, we’ve led on how we can develop new equipment that will make our game safer for our players.”

Goodell touted the development of a new helmet that was born out of the league’s health initiative with GE — the VICIS ZERO1 helmet — that has garnered an array of positive reviews and skepticism.

“We put it out that — how do we use new materials, how do we use new technology to create a better helmet that’s going to absorb the impact?” Goodell said. “And we have one that’s hitting the market this year. It was developed by somebody in Seattle.

“I think that because of that leadership, because we’ve taken responsibility to really manage the health and safety of our players that is going to be seen as, ‘Hey, they’re doing the right things. Sure, they have challenges, but so does every active sport.’ What we’re learning in our sport is helping every other sport.” 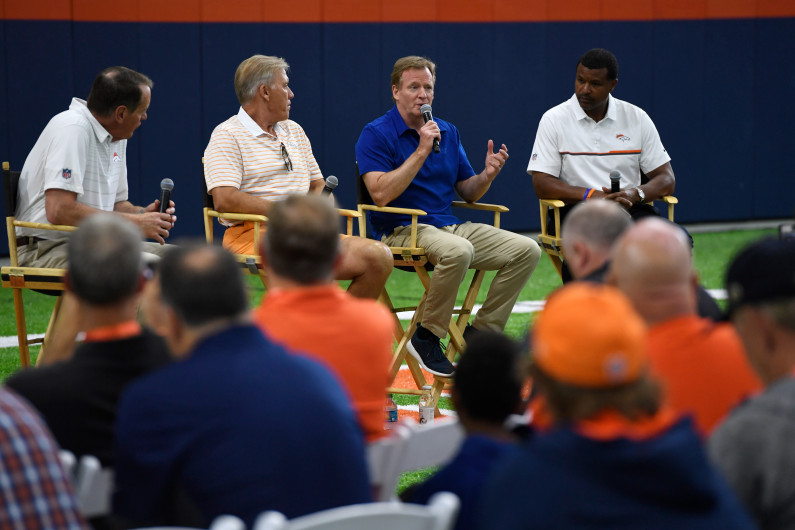