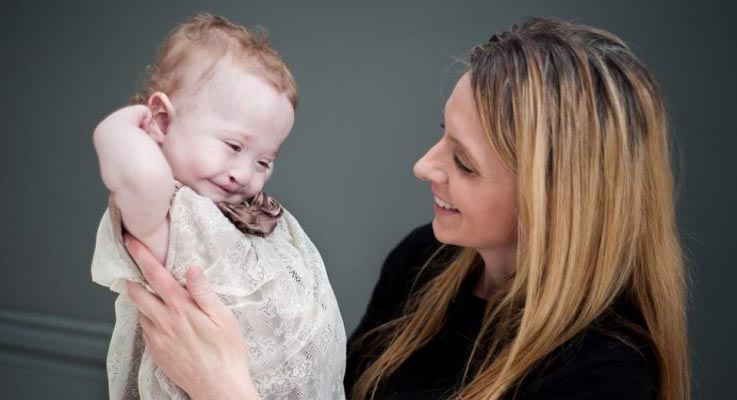 Two small drops of cannabis oil a day is all it takes to keep 3-year-old Remie Ellett of Nephi, Utah, walking and free of side effects from a multiple of illnesses.

But now, the mother of the severely-disabled girl – who suffers from thyroid disease, respiratory issues and digestive problems that require a feeding tube – says that she fears losing custody of her daughter and will likely have to move out of state to prolong Remie’s life unless legislators pass a state law making medical marijuana legal.

Sarah Ellett, 43, a single mom with two other disabled children at home, says that caseworkers from the Utah Division of Child and Family Services came to her home on Monday after learning that she had been treating Remie illegally with cannabis oil. She believes that somebody tipped off authorities that she was putting small droplets of cannabis oil under Remie’s tongue with a toothpick.

“They told me they needed to make sure that Remie wasn’t in any danger,” Ellett, who works part-time for an insurance company, tells PEOPLE. “I told them they would have to leave and talk to my lawyer. They were polite and said they were sorry they had to be there, but it did cause me concern. My biggest worry is being unable to continue to treat Remie without being in violation of Utah law. There are a lot of risks there.”

Ellett, who is now considering moving her family to Colorado or another state where marijuana is legal, says that cannabis oil has markedly improved Remie’s symptoms from panhypopituitarism, a condition that reduces or destroys the function of the pituitary gland, causing blurred vision, low blood sugar, stunted growth and vomiting.

Although growth hormones and thyroid and hydrocortisone medications have helped, “the cannabis oil is a miracle – it’s what is giving her a good quality of life,” Ellett tells PEOPLE. “The very first day Remie had it, she walked on her own for the first time. It’s helped balance her blood sugar, controlled her nausea and enabled her to move her jaw, chew and swallow. Because of this oil, she’s achieving milestones that we never thought possible.”

There was little hope from doctors that her daughter, named Remie, meaning “sweet little remedy,” would live after she was born, says Ellett, who has seven other children, most of whom are on their own.

“She was very sick and was in the hospital for 20 months,” she says. “Looking at her now, nobody can comprehend just where my daughter has been and how far she has come.”

Ellett decided to register Remie for the Oregon Medical Marijuana program last summer after researching the benefits of cannabis oil and learning that Oregon was the only state that allowed out-of-state patients to enroll. That policy was discontinued this month, so Ellett will now either have to make frequent trips elsewhere to buy the oil or sell her house and move to continue treating Remie.

She and four of her other children could also use the benefits of cannabis oil, she says, having been diagnosed with familial polyposis – a genetic condition that causes polyps and cancer in the colon. At age 40, Ellett decided to have her colon surgically removed. Despite frequent pain, she often goes several days without sleep in order to provide around-the-clock care for her daughter.

“I remember walking with Remie one evening and looking up at the sky and suddenly realizing that a law in Utah would be a long time coming and that my daughter did not have the luxury of waiting for that law,” Ellett tells PEOPLE. “I’m in that window now where I have to take action to save her health and possibly her life. That’s what this is all about. Saving my child’s life.”

Utah DCFS officials say they can’t comment on Ellet’s situation. Since witnessing a dramatic turnaround in Remie’s health after treating her off and on since last summer with cannabis oil obtained in Oregon, Ellett has rallied with other parents and patients, including Enedina Stanger, a disabled mom of two who was arrested last year for smoking pot to ease her symptoms, to get a bill passed in Utah legalizing medical marijuana.

“Once again, we see Utah state agencies enforcing outdated and ignorant cannabis policy, and again the outcome is unjust and cruel at best,” Republican state representative Mark Madsen, who is sponsoring the bill that would legalize whole plant marijuana for Utah patients, tells PEOPLE.

“How many more parents, like Sarah, and their sick children, like Remie, will Utah government force to flee to more enlightened and compassionate states before their elected representatives start respecting them enough to return the freedom and choice that never should have been denied them to begin with?” he asks.

“Sarah is terrified – the state truly has all the power,” adds Ellett’s friend, Christine Stenquist, cofounder of Utah’s TRUCE (Together for Responsible Use and Cannibis Education) patient advocacy group. “With situations like hers, it’s all dependent on whether the caseworker is empathetic. We need a law in place that allows patients to use cannabis without the risk that somebody will come in and take away their kids.”