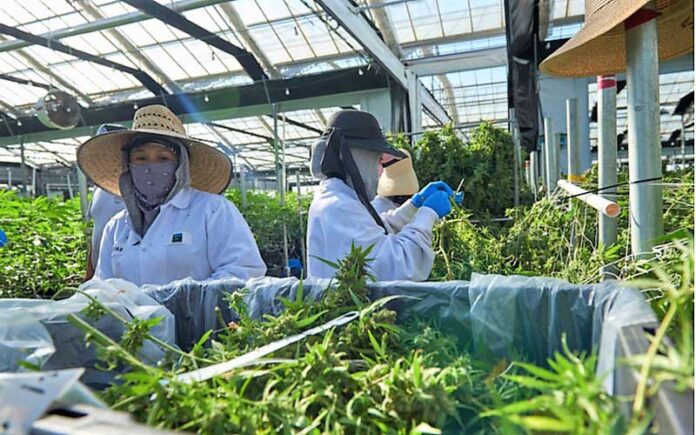 The Illinois weed industry, fresh off surpassing $1 billion in revenue during its first year of recreational marijuana sales, may already be facing its “Norma Rae” moment of union awakening.

Seeking higher pay, career advancement and better protection from the COVID-19 pandemic, cannabis workers from Chicago to Springfield have begun to unionize, planting a seed that could reshape the fast-growing marijuana labor landscape.

“The industry has unfortunately just provided jobs, and not the well-paying careers that we all thought cannabis was going to generate,” said Moises Zavala, director of organizing at Local 881 of the United Food and Commercial Workers International Union, which is representing cannabis workers in Illinois.

Late last month the 40 employees at Sunnyside in Chicago’s Lakeview neighborhood became the first dispensary workers in Illinois to ratify a union contract. The state’s first cannabis union contract was ratified in December by more than 180 workers at the Cresco Labs cultivation center in Joliet.

While that represents a fraction of the state’s 82 dispensaries, 21 cultivation centers and nearly 17,000 cannabis workers, two other dispensaries are voting on whether to unionize, and early contract successes may determine the trajectory of the marijuana unionization movement.

“If they’re able to get some significant victories and negotiate some good contracts, they can build momentum, they can point to those as they organize workers at other facilities,” said Martin Malin, co-director of the Institute for Law and the Workplace at Chicago-Kent College of Law.

Marijuana sales in Illinois have soared since the state legalized recreational use in January 2020, reaching $1.03 billion last year. That included $669 million in recreational weed sales and more than $366 million in medical sales, according to the Department of Financial and Professional Regulation, which regulates dispensaries in the state.

The pace has accelerated in 2021, with nearly $232 million in total marijuana sales through February, according to the state.

California was top state for legal marijuana sales last year at $4.1 billion, followed by Colorado at $2.2 billion, according to data posted by each state. But Illinois is gaining ground quickly.

A December report by New Frontier Data projects the U.S. cannabis market to double by 2025, reaching $41 billion in annual sales, with Illinois surpassing every state but California to claim an 8% market share.

That growth is not lost on marijuana workers like Jake Lytle, 22, who has been a $16-per-hour product specialist at Windy City Cannabis, a recreational dispensary on Weed Street in Lincoln Park, since it opened in July.

“The marijuana industry has been generating an insane amount of revenue for these corporations,” Lytle said. “We just need workers to actually be involved in the prosperity of this industry.”

Retail marijuana product specialists, also known as budtenders, average $15 an hour nationally, according to a 2020 salary guide published by Vangst, a Denver-based cannabis recruiting website. More than 90% of the companies surveyed offered benefits including paid time off, medical insurance, 401(k) plans and stock options. On the rise are “creative perks” such as pet insurance, with more than a fourth of employers offering a cellphone allowance, according to the report.

Lytle, who lives in the Edgewater neighborhood on Chicago’s North Side, is on the union committee at Windy City. About 30 workers are in the process of voting on whether to unionize through the Des Plaines-based Local 881 UFCW, with the results to be tallied March 22.

In addition to wages, employee concerns include the small size of the facility, the lack of a break room and COVID-19 safety protocols they say are insufficient.

The dispensary is so small, Lytle said, that staffers have been taking care of walk-in customers on an outside patio to meet social distancing requirements, making for an inhospitable retail environment during a Chicago winter.

Complicating the unionization effort at Windy City Cannabis is an ownership situation that is in limbo. Curaleaf, a publicly traded Massachusetts company and one of the largest cannabis operators in the U.S., bought the dispensary as part of its $830 million acquisition of Chicago-based Grassroots in July, but has yet to receive final approval from Illinois regulators.

Tracy Brady, a spokeswoman for Curaleaf, declined to comment on the union vote at Windy City Cannabis, or the concerns of employees, pending regulatory approval.

Chris Slaby, a spokesman for the Department of Financial and Professional Regulation, did not provide guidance on the status of the Curaleaf licensing approval.

Chicago-based Cresco Labs, one of the largest multistate operators in the cannabis industry, owns 10 retail dispensaries and three cultivation centers in Illinois — the maximum allowed by state law. The publicly traded company finds itself at the center of the fledgling Illinois cannabis union movement.

In January 2020, workers at the Cresco Labs marijuana grow facility in Joliet voted to join the UFCW, two weeks after recreational weed sales were legalized in Illinois, ratifying the state’s first union cannabis contract less than a year later.

Employees at the Sunnyside dispensary in Lakeview, which is also owned by Cresco, voted to join the union in June and ratified their contract Feb. 26. Terms of the deal include built-in wage increases, more vacation time, reduced health care costs and a 40% discount on Cresco-brand cannabis products.

“We have a successful contract with our employees in Joliet and now in Lakeview, but it’s a focus of ours to make sure our employees know they can work directly with us, and we can work together to have a positive outcome,” Cresco spokesman Jason Erkes said.

Erkes said the first vote in Joliet last year “got our attention,” and the company “stepped back and prioritized” employees, focusing on competitive wages, benefits and the work environment. Cresco set a new $15 an hour minimum wage across the company, implemented employee wellness days and developed the “Cresco Cares” program to ensure employees were compensated for time off during the pandemic.

At Cresco’s 215,000-square-foot cultivation center in Lincoln, the largest grow facility in the state, workers rejected joining the union in January by a 24 to 9 vote. There are 236 employees at the plant, but most were not involved in the vote because they are agricultural workers and ineligible to unionize under federal law.

“The outcome of the Lincoln election shows that our focus on our people is making a difference,” Erkes said. “It’s being heard.”

Zavala said the union movement lost steam in Lincoln after Cresco “did a number on employees” by prolonging the organizing process for six months.

“That’s just too long of a process and it wears people out,” Zavala said. “But that doesn’t take away that those employees still need the protection.”

Employees at the Ascend dispensary in Springfield also are voting on whether to unionize through the UFCW. Their ballots were mailed out Tuesday, with an April 20 vote count, Zavala said. A Massachusetts-based multistate cannabis operator, Ascend Wellness Holdings has three retail locations in downstate Illinois, with a fourth set to open in the second quarter near St. Louis.

The UFCW, which has 1.3 million members, primarily represents grocery store and meatpacking workers. It has become an early force in unionizing the cannabis industry, representing tens of thousands of workers across multiple states.

The UFCW has been organizing cannabis workers since 2011, making inroads at medical marijuana dispensaries in California and a handful of other mostly western states. It expanded its reach after Colorado and Washington approved recreational marijuana sales in 2012, opening the floodgates to a broader retail industry.

Weed is legal in 36 states, including 15 that allow recreational use. The industry supports about 321,000 full-time equivalent jobs nationally as of January, up 32% year over year, according to the 2021 Leafly Jobs Report.

The number of cannabis employees nearly doubled in Illinois last year, reaching more than 16,800, according to the report produced by cannabis website Leafly and Whitney Economics. That would put current union membership at about 1% of the state’s cannabis workers.

Union members across all industries accounted for 14.3% of wage and salary workers in Illinois last year, up from an all-time low of 13.6% in 2019, according to the U.S. Bureau of Labor Statistics.

While the influence of unions has waned in recent years, they may be primed for a resurgence, fueled both by worker safety concerns during the COVID-19 pandemic and vigorous support from the Biden administration.

The success of retailers such as Amazon has raised the profile of frontline workers who served customers amid the disruption, said Robert Bruno, a professor of labor and employment relations at the University of Illinois at Urbana-Champaign.

“The increased importance of a lot of people identified as front-line or face-to-face essential workers has heightened on the part of workers the need for some sort of voice and representation,” Bruno said.

On Sunday, Biden posted a video on Twitter in support of 5,800 workers in Alabama voting on whether to become the first Amazon warehouse in the U.S. to unionize.

Having a “robust” advocate in the White House, Bruno said, could swing the potentially groundbreaking vote in Alabama, and boost the bargaining power of unions across the country.

“The Biden administration represents the most pro-labor administration that we’ve seen, certainly in my lifetime,” Bruno said. “He’s not hesitant at all to embrace the cause of unionization.”

Successful results for the Illinois dispensaries voting on UFCW representation could likewise light a fire for the cannabis union movement in Illinois, Bruno said. He likened it to the early days of the auto industry, when General Motors and the United Auto Workers union reached the first labor contract in 1937.

The agreement set a standard that spread across the industry and continues as a force for labor more than 80 years later.

“It’s not uncommon to see a small number early on get successful in an emerging industry, and then that becomes a pattern,” Bruno said. “And then other employers in the industry simply replicate what they see, because in effect, they realize it’s the standard, that they’re going to operate in a unionized setting.”

The pool of potential Illinois cannabis union members is expected to grow this year, with nearly 30 recreational dispensaries yet to open under the state’s inaugural legislation. A long-delayed lottery to award 75 new licenses with a social equity focus is also likely to move forward after the state gave hundreds of unsuccessful applicants a second chance to qualify.

Like “Norma Rae,” the 1979 movie starring Sally Field, who organizes textile workers at a Southern mill, Lytle hopes his pioneering efforts to unionize at Windy City Cannabis will inspire others among the growing ranks of Illinois cannabis workers.

“We want more workers in Chicago and beyond to follow in our footsteps, because more and more people are going to start to have the opportunity to work at a dispensary as it continues to get legalized recreationally,” Lytle said. “They should feel like they’re entering into an industry where they can make a decent living, and don’t just have to be working it as a side gig.” 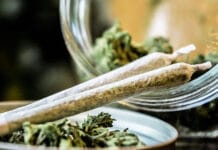 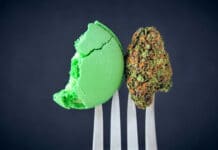 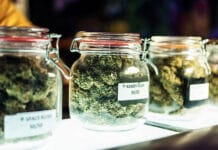 Border Weed: How The Hometown Of Tater Tots Became A Cannabis Capital

Legalization Date Of Recreational Marijuana In Virginia Moves Up

Border Weed: How The Hometown Of Tater Tots Became A Cannabis... 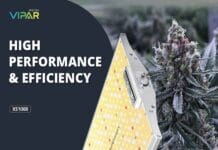 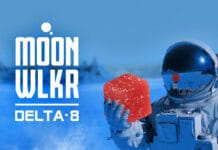 CA: San Francisco One Of Few US Cities With Marijuana Lounges