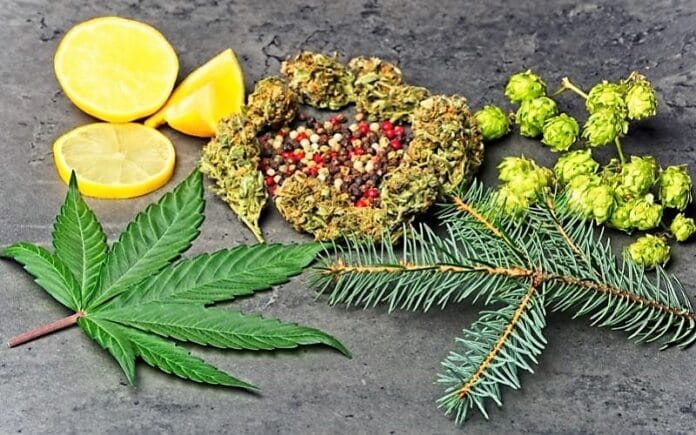 If you consume weed regularly either recreationally or for its medical benefits, you’ve likely heard of terpenes already. When shopping at a dispensary, you may have even seen special terp carts or sauce on the shelves in person and may be wondering – what are terpenes? Any and every conscious cannabis consumer, or grower should know. That’s why we’ve put together the ultimate guide to terpenes in weed. So, let’s get more familiar with cannabis terpenes. Keep reading to discover everything you need to know about these unique plant compounds.

What Are Cannabis Terpenes?
One thing’s for sure if you’ve ever smelled weed, you know terpenes without even knowing you do. That’s because cannabis terpenes are responsible for the plant’s signature scent and aroma. Terpenes are cannabis compounds that serve the adaptive purpose of repelling predators and luring pollinators as other plants do. They’re produced by the plant’s resin glands and are found in the trichomes that cover the buds of cannabis plants. This is also where THC & CBD are produced, which makes cannabis’ notorious sticky-icky nature that much more important.

Not only do terpenes produce aromas that add to weed’s flavors, but research is proving they produce their own effects too. Meaning terpenes are vital to the classification of many strains since each strain’s genetics have a unique terpene profile. In addition, terpenes contribute to what’s known as the ‘entourage effect‘ which is the phenomenon describing the act of cannabinoids and terpenes amplifying one another’s effects when consuming together.

Most Common Cannabis Terpenes
If you have a favorite flavor or cannabis scent, it’s likely you already have a favorite terpene too. Cannabis may contain nearly 100 different terpenes, but there are a few that are most commonly found in today’s mainstream strains. In fact, many commercial and home growers now specifically cultivate plants with rich and robust terpene profiles with the goal of delivering aromas and effects, consumers desire the most.

So, just what are the most abundant terpenes in cannabis today? Here’s a breakdown of each.

Looking at its name, it’s no surprise that alpha-pinene is responsible for the classic, crisp pine and woody aromas that cannabis often has. Interestingly enough, one of alpha-pinene’s most notable effects is counteracting THC. This means it’s a terpene that those sensitive to overly intense psychoactive effects should turn to. In addition to taming THC, alpha-pinene can benefit memory retention as well as increasing alertness. If these effects appeal to you, below are a list of strains that tend to have high levels of the alpha-pinene terpene –

Beta-caryophyllene is a unique terpene right off the bat. That’s because it’s the only known terpene to also act as a cannabinoid would. Meaning, it can interact and influence the endocannabinoid system and its receptors just like THC and CBD. By doing so, beta-caryophyllene is highly effective at reducing stress. In addition to relieving pain, anxiety, depression, and ulcers. On the scent side, the terpene delivers a spicy, woody, clove-like aroma similar to pepper and is found in the following strains –

Humulene is found less often in popular strains than most terpenes but is just as beneficial. Plus, out of all the known cannabis terpenes, humulene is one that’s been widely researched. So far, experts have determined that it produces anti-inflammatory, antifungal, and antibacterial effects, and may be able to terminate cancer cells, too. For the senses, this terpene has a hoppy, herbal, and floral aroma with a hint of woody earthiness. To consume humulene, seek out any of the strains below –

Like alpha-pinene, limonene gives a clue to its aroma with its name. This terpene is to thank for many strain’s zesty and refreshing citrus scents. While more research is necessary to definitively prove limonene’s effects, early studies are showing that the terpene is responsible for many of cannabis’ most alluring benefits, like improving mood and reducing stress with uplifting effects. Therapeutically, limonene may be a potential treatment for anxiety, depression, inflammation, pain, and cancer. The terpene is found in popular strains including –

The terpene linalool is also found in lavender which explains its floral-like aromas. It also explains its sedating and relaxing effects which lavender is well-known for. In addition to acting as a calming agent, linalool enhances moods and has similar benefits to that of limonene. Including the potential to relieve anxiety, depression, insomnia, pain, inflammation, and neurodegenerative disease. To consume linalool for these types of benefits, you can seek out the following strains –

Last but certainly not least is the myrcene terpene, which just so happens to be one of the most abundant terps found in cannabis altogether considering it accounts for 20% of terpene profiles in most modern-day commercial strains. Consequently, myrcene’s abundance might be the reason so many strains produce a musky, earthy, herbal and clove-like aroma. As for effects, the terpene is highly sedative and relaxing while having the potential to treat insomnia, pain and inflammation. In addition to serving as a natural antioxidant. The strains with notable levels of myrcene include –

Cannabis Terpenes: The Nose Knows
There’s a common saying amongst the industry that ‘the nose knows’ when it comes to choosing cannabis strains, as your natural senses often lead you to the strains you may desire or prefer the most. So now when someone asks, what are terpenes? you’re fully up to speed on how to answer. Go on and use this knowledge to guide you on your cannabis journey and lead you to your next favorite strain.