U.S. border officers at northern ports of entry have been asking Canadians if they've ever used marijuana – and those who answer "yes" get banned from the United States for life.

Meanwhile, at the arguably more problematic southern border, officers don't seem to care about the drug histories of Mexicans.

U.S. Customs and Border Protection officers in Arizona and other states along Mexico's border apparently never ask Mexicans about lifetime pot use.

Federal officials could provide no evidence of a Mexican being banned from the United States merely because of an admission of past use of marijuana or other drugs.

Such bans are routinely applied to Canadians.

"The southern border has bigger priorities than to ask stupid questions," said Len Saunders, a Canadian-born Washington immigration attorney. "They're less busy here [on the northern border]. They're enforcing obscure laws that the officers on the southern border don't have time to deal with."

Saunders has helped dozens of Canadians who have been zapped with the lifetime ban, guiding them through a waiver process that eventually allows entry to the United States. The waiver costs $585 and takes up to a year to process.

Immigration officers have always been able to ask would-be U.S. visitors about their crime histories, including about crimes of "moral turpitude." Under U.S. law, "any violation of any laws, foreign or domestic, relating to illegal drugs can be a ground of inadmissibility."

The United States has long hassled Canadians admitting to past drug use: In 2007, for example, a Vancouver scientist was barred from entering after a U.S. border officer Googled his name and found an article in which the man admitted to previously using LSD.

New stories about these bans of Canadians for drug-use admissions increased in 2012, after Washington and Colorado voters legalized marijuana for all adults 21 and older.

"Pot smokers warned: think twice before crossing U.S. border," reads the headline of a 2013 article by the Canadian Broadcasting Corporation. "Canadians heading south to sample legal marijuana should not expect a warm welcome at the border."

Media accounts since then support the idea of a less-than-warm welcome by U.S. authorities for cannabis aficionados. But CBP officials maintain that no new policy went into effect at the ports of entry because of the recreational-marijuana laws.

Individual border guards have the discretion to ask about past drug use. Usually, something about the would-be visitor's appearance triggers an officer to ask probing questions, said a U.S. Department of Justice official who was not authorized to comment for this article.

In one case, for instance, a Canadian had a coin purse with the phrase, "Weed Money," stenciled on it, he said. In another case, a Canadian seeking entry "had a High Times [magazine] in his car" and admitted he was a "grower," the official said.

Technically speaking, even Canadian Prime Minister Justin Trudeau, who's admitted publicly to past marijuana use, should be banned from entry to the United States based on the same law that has gotten other Canadians banned.

(Former President Barack Obama, an admitted past pot user, can travel to Canada whenever he wants, though, because Canada doesn't have a similar law.)

Admitting past pot use to a CBP officer at a U.S. port of entry can ruin a Canadian's day.

Canadians have detailed in news reports how U.S. authorities treated them like criminals just for answering a question honestly. One New York lawyer reported handling about 50 lifetime-ban waiver cases in the last few years.

Jessica Goldstein of Vancouver, for instance, was detained and interrogated for six hours in 2013 while on her way to a concert before being told to never come back to the United States.

Alan Ranta, a music writer who had the "Weed Money" coin purse, reported being handcuffed, thrown into a small cell, and interrogated about his use of marijuana. Slapped with the lifetime ban, Ranta now advises Canadians not to lie to border guards, but to avoid answering questions, if possible.

The DOJ official contacted by New Times denied that CBP officers don't ask Mexicans about past drug use at southern ports of entry.

"I'm sure they do ask about it," he said. "It's not asked very frequently."

However, the official could not confirm that any Mexican has been banned from entry because of an admission of past drug use.

Shalene Thomas, a CBP supervisor in San Diego, said she has never heard of a similar ban being applied to Mexicans.

And several Arizona immigration lawyers contacted by the New Times said that Mexicans aren't being asked about past drug use.

"I have not come across any clients or prospective clients who have been asked about that," Tucson lawyer Maurice "Mo" Goldman said. He added that he wasn't aware of a single case involving a Mexican who faced a lifetime ban for making an admission at a port of entry, or any cases of Mexicans applying for ban waivers.

"It goes to show there is a lot of inconsistency on how the law is applied," Goldman said.

Saunders said the only people benefiting from the "moral turpitude" law are immigration lawyers like him. 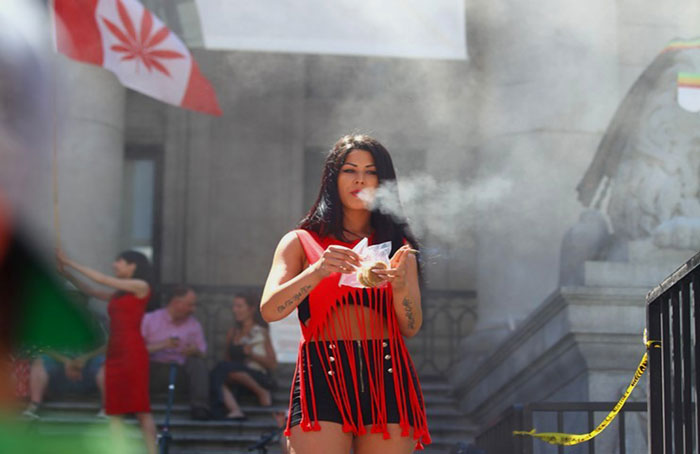