Cannabis and the Pineal Gland - turning on your "third eye"

The pineal gland is the key to psychedelic enlightenment. 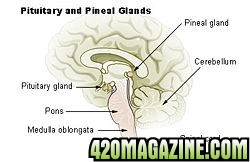 The pineal gland, located in the centre of the brain, is about a quarter of an inch in size, reddish-gray, and weighs about one-tenth of a gram. Unlike other parts of the brain which come in pairs, the pineal gland is singular. Its location in the center of the brain and presence in other species indicates it is an older part of humanity's evolutionary brain system.

Directly affected by the light taken in through the eyes, the pineal regulates sleep, menstrual cycles, mating seasons, hibernation, seasonal flight patterns and many other "instinctual" behaviors.*1

Psychedelic researcher Dr Rick Strassman has explained how the pineal gland "is quite active in synthesizing compounds related to serotonin, an important neurotransmitter in the brain. Neurotransmitters are the chemical messengers allowing communication among individual nerve cells. Most typical psychedelic drugs, including THC, are active in brain sites which are also affected by serotonin. In addition, most of these drugs are similar in their chemical structure to serotonin."*2

Strassman states that most of the above substances belong to the "tryptamine" class of drugs, and proposed that the pineal gland produces "one or two endogenous tryptamines found in human blood and cerebrospinal fluid. This latter fluid continually bathes the brain, and compounds found in it most likely affect brain function."*2

Lyttle points to the universal mystic vision of God as an all-consuming white light, and postulates that on a physiological level, this experience is produced from chemical reactions in the pineal gland which is extremely light sensitive. "Light, the eyes and the 'third eye' or pineal gland form a triad which directly controls and regulates normal or altered consciousness and many bodily functions... these three factors are also directly related to, or implicated in, mystical states and the 'psychedelic' experience."*4

Visions of white light are not only associated with mysticism and psychedelic explorations, but are also a prevalent image recorded by those who experience the near-death state. A reason for this recurring theme in near-death states may be found with Dr Strassman, who suggests that after death, as the pineal gland shuts down, some of the chemical present in it may turn into "psychedelic" drugs!

According to Dr Strassman, the pineal gland may not only play an important role in death, but also in birth, possibly even in rebirth...

The pineal gland first becomes visible in the human fetus at the same time as does the clear differentiation of the fetus into female or male gender. The time for both of these events is 49 days, the period of time that, according to several Buddhist texts, the life force of a deceased individual coalesces around its next corporeal existence. If the life force does indeed enter through the pineal, the manifestation of this coming and going would be the release of psychedelic tryptamines, which would mediate the visionary experiences associated with near-death, and near-birth states.*2

Certain initiatory cults, such as Tantrism, Kundalini and Gnosticism, acknowledged the role of the pineal gland in the spiritual process. The spiritual/instinctual life force was seen as a serpent, due to its physical structure extending from the genitals, through the spine and up into its single all-seeing eye in the pineal gland.

These spiritual systems focussed around the raising of this primordial serpentine energy, based in the genitals and at the core of the pro-creative process. Through certain yogic practices this energy can be reversed and forced to travel up the spine into the brain, where it is reputed to cause "enlightenment".

In the Kundalini system, which has seven distinct energy centers, the pineal gland has been variously identified with the "Ajnes Chakra" and alternatively the "Sahasrara Chakra". Both pre-Christian Mithraic and second century Gnostic texts also distinctly refer to the pineal gland in relation to seven distinct energy centers and this serpentine energy.

Not surprisingly, a common experience of those who have successfully raised their kundalini is the vision of all-consuming white light. More importantly, the devotee who successfully raises the kundalini experiences a radical switch in consciousness, obliterating the sense of individuation, and enters Nirvana.

Another potential reference to this curious little gland may occur at the end of the New Testament book of Revelation, where we find that the elect will know God intimately, "his name will be in their foreheads," which is where the pineal deeply lies. Noting the gland's strong connection with light, the rest of the passage is interesting: "There will be no more night; they will not need the light of a lamp or the light of the sun, for the Lord God will give them light."*5

Likewise in the Qabalistic tradition, the primordial archetypical man, Adam Kadmon, shines forth with a light from his forehead that was rich in complex patterns and linguistic symbols. Similar imagery occurs in the Persian tradition of the light-like sacred fluid, the "vivifying and spermatic" xvarenah. "Ahura Mazda is preeminently the possessor of xvarenah, but this 'flame' also springs from the forehead of Mithra and like a solar light emanates from the heads of sovereigns."*7

This mind-light from the forehead is also identical with the Eye of Shiva, which when opened in the individual burns away the concept of ego-bound consciousness, and when opened collectively has the potential to burn away the ties and fetters of the Old World Order.

Perhaps if enough modern psychonauts achieve the pineal experience we can push this new frame of mind onto the rest of ego-bound humanity. Here at the turning of the millennia, in the apocalyptic year of 1999, never has the potential for the state of mind which has been the goal of yogic sages, and psychedelic voyagers alike been so possible to attain for humanity as a whole.

Through philosophy we can understand it, through science we can identify it, through psychedelics we can experience it. So ask yourself "Are you experienced? - 'Cause I am!"*8

I smoked a while this synthetic shit... many different batches. And one day suddenly my third eye was active.
It wasn't a nice time for me, very hard to tell but I have seen visions and forget every moment everything... was like alzheimer disease.
I didnt smoke further that stuff but over 2 weeks my third eye was... hmm I will not say clearly open but it was in action and I couldn't handle it. As it was over I was really happy about it... Now I will never smoke synth. stuff again. But wirth weed it works also good you have either smoke much more of strong weed or you smoke one time a month and meditate on it... I choose the second way.
Sorry for my english Im turkish.
Om , let there be peace and love among all beings of the universe. Let there be peace, let there be peace, Om Shanti Shanti Shanti.

I should tell you all about my NDE

My 1st Grow, its do or die time!! Completed

This needs to be taken with EXTREME caution....i'll tell you guys my story here

So roughly four years ago, I had embarked on a spiritual path...meditation was done religiously, every day...four times a day. It was truly an amazing experience. I was feeling the Kundalini energy coming all around my body, and felt amazing impulses everywhere.

While meditating, I could pretty much feel my pulse in all areas of the body....but I wanted to go deeper inside. I had tried smoking weed prior to meditating to help release my thoughts so I could go deeper

I was caught in a trance of hypnagogia, would see amazing colors and lights. I started feeling a numbing pressure in the pineal gland, and could feel it opening up. The feeling I had of electricity flowing through my body had become really intense, and I had stopped meditating at that point.

That week I had talked to a "spiritual guide" and mentioned I had become worrisome of it...but she had said to go deeper and I would have a real life experience. So, I had repeated the process again and had gone deeper. I stared hearing voices as if someone was right there in the room with me, and it had become really intense.

I had persisted with the meditation, and could feel the pineal gland tingling very intensely....it almost felt like someone was slowly pushing their finger into my head.

Later that night I had tried to go to sleep, and all of a sudden I was getting a zapping sensation in my brain. As soon as I would calm myself and relax, it would feel like my head was exploding with electricity and going up/down my spine. To this day it happens, and I have not been able to smoke weed since.

I have tried to get help from a doctor and he was hinting that I was "crazy". I remember him saying "I see people who come in here and tell me they see dead people...you're not one of those now are you"

I tried spiritual counseling, and this had failed as well. To those day I still get this sensation and jump up out of my bed at night because of the electrical impulse feeling in my brain....

Please, use caution with experimenting with something such as this...
My first grow journal can be viewed here

Any advice is greatly welcome!


I love skinny girls, but I'll never pass up a fatty

It is very interesting! My third eye opened!

Why does Cannabis make us sleep so well?