There are several companies that have developed hemp-based products for animals, mostly intended for dogs. The edible products are suggested for a variety of ailments but the majority seem to focus on joint conditions for older dogs, neurological health and calmness.

Most of the companies cite anecdotal evidence of their supplements' efficacy or a vet's endorsement, but there don't seem to be any studies supporting the use of these products for animals. The studies that most of the products use for validation are studies on humans, not animals. A grand irony for all the years animals have been used as test subjects for human drugs.

Using cannabis on animals isn't without precedent. When cannabis was a legal medicine at the turn of the century, it was listed for use on animals. In a Parker-David pharmaceutical catalogue from 1912, medical cannabis was extensively used in the veternary field, but it was mostly intended for human use and the difference was only in the dosage. Here's an excerpt from the catalogue:

Fluid Extract — Cannabis Americana (No. 596 — per 8th U.S.P.) — pg. 14: — Tested physiologically Dose, 2 to 6 drs., narcotic, analgesic, sedative. May be often used in place of opium with the best results, especially in spasmodic disorders and in genito-urinary irritation: also in persistent cough and in hysteria, as well as in such painful affections as flatulent and spasmodic colic, pruritus and neuralgia, and to relieve spasms of chorea: also to quiet refractory animals for standing operations. This fluid extract, prepared from the home-grown cannabis, is in every respect equal to that produced from the expensive East Indian drug.

The American Veterinary Medical Association hasn't taken an official stance and for the most part veterinarians aren't allowed to prescribe cannabis to animals even in states where marijuana is legal. However, Nevada is considering legislation that would allow it. The Association didn't respond to a request for a comment.

Colleen O'Brien, a senior director at People for the Ethical Treatment of Animals, said, "If the proper administration of marijuana can truly relieve dogs' pain, then they should be given the same consideration that humans in pain are given, with regular doses to help reduce their misery. But it's an entirely different matter to amuse oneself by getting the cat drunk or the dog high. In fact, it sounds like something that only a total pothead or moron would do."

Julianna Carella, CEO of Treatibles, a maker of these products said that there are studies on animals under way at New York University and the University of Pennsylvania, where a study on 50 dogs is being conducted. Since the status of cannabis is that it is a schedule one controlled substance, animal studies have been difficult. The same challenge has been faced with human cannabis studies.

Another company, Canna Companion, says that its product is legal because it contains less than 0.3% THC, is made from Cannabis Sativa and is not intended for human consumption. The website says it meets the current definition of hemp supplements under U.S. Federal law. True Leaf is another hemp pet chew company that is based in Canada. It also contains less that 0.3% of THC, but certain cultivars contain cannabididiol. Neither company responded to requests for comment.

Dosage amounts are another area of uncertainty. In the old pharmaceutical catalogues, the dosage tended to be a variation on the human amount. Most of the current products seem to suggest an amount, but then also tell customers that they should monitor their animals response and then treat accordingly. Carella said, "As with all cannabinoid dosage and titration the best approach is start with as low a dose as possible. When we first released the product we included a feedback postcard with all orders, and have been logging over 2,500 results received. This information influenced the dosage suggestions that we include on our packaging, as there was common feedback from dog owners who have purchased the product and observed the results."

Since there have been instances of humans ingesting high levels of cannabinoids in edibles, there could be a concern about the same thing happening in animals. However, says Dr. Rahpael Mechoulam, an Israeli organic chemist and professor of medicinal chemistry at the Hebrew University in Jerusalem, "CBD works in a variety of ways and, surprisngly, it has no side effects. As a matter of fact, it is completely nontoxic. One of the least toxic compounds that I've seen is cannabinoid."

While many of the companies' products seem to target dogs, cannabis at the turn of the century was used primarily on farm animals like horses and cows, although there is some suggested dosage amounts for dogs. Carella said their products are used on a variety of animals including cats, rabbits and birds.

Be prepared to spend some money for the supplements. A bag of CBD Treatibles is $24 and a case of treats is $300. However, if it helps your animal and you are willing to take the risk, then maybe it's money well spent. 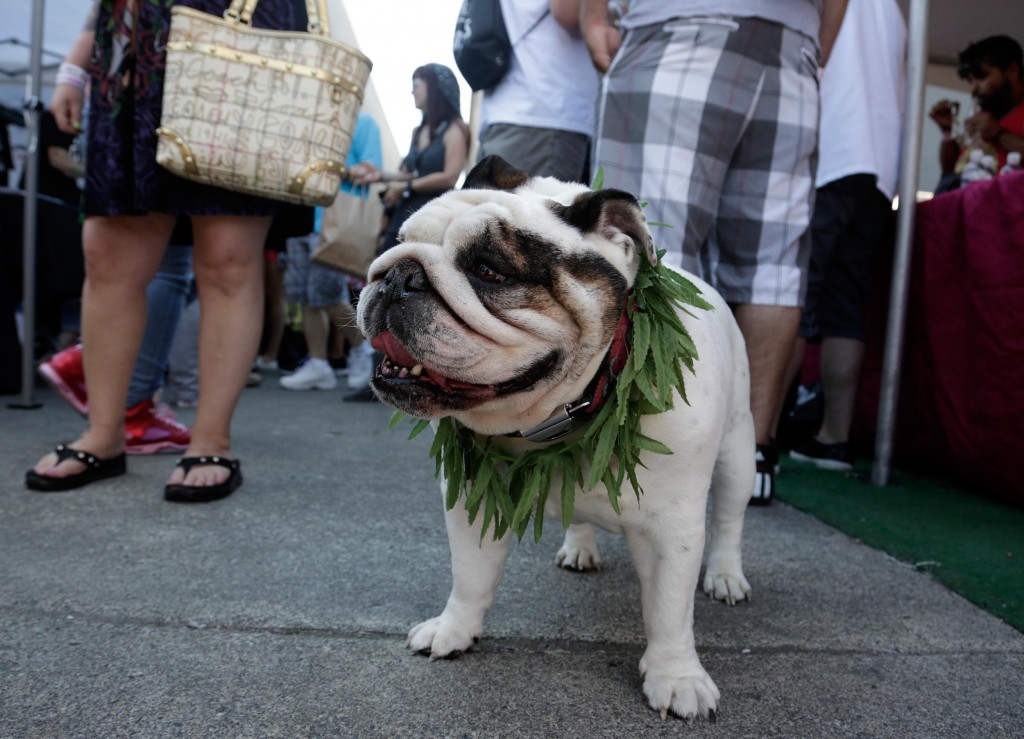