There are many questions surrounding Initiative 300, the social-use measure that Denver voters passed on November 8 (although the final count took a week). The city has been getting calls from people asking everything from how businesses can apply to how a new state rule will affect I-300. As we reported last week, shortly after the initiative passed the Colorado Department of Revenue announced that it was adopting additional language in the "Conduct of Establishment" section of the Colorado Liquor Rules, declaring that a venue that already holds a liquor license cannot apply for a license to serve marijuana.

And some callers are asking the city how they can quash the initiative altogether.

"When voters are doing citizen initiatives, [Denver officials are] always looking down the line to if it passes, what are some of the challenges that might be brought forth to an ordinance," says lawyer John Jennings. Prior to joining Ireland Stapleton, Jennings served as the hearings manager for the Denver Department of Excise and Licenses, which handles dispensary applications.

For someone to sue the city to stop I-300 now, Jennings says, it would have to prove some injury. "It doesn't need to be physical harm or economic harm - it can be intangible," he explains. "This is what comes up in environmental cases, for example, or when civil liberties are deprived."

All that's required for a legal challenge is a single resident or group claiming harm from the initiative. But while that sounds fairly simple, the process of filing a lawsuit is anything but. Although any Denver resident has the right to sue the city over I-300, a complex timeline governs when that can happen, Jennings notes. Denver's charter cannot be amended for six months, so I-300 is the law of the land - or at least the city - for for the next six months. After that period is up, Denver City Council has the option to amend the ordinance.

From now through early January, the Office of Marijuana Policy will be creating the application that businesses will use to apply for social use. According to Dan Rowland, citywide communications advisor for the City and County of Denver, the initiative's requirement for neighborhood approval doesn't exist in any of the city's other licensing requirements, so that aspect of the process will have to be carefully discussed by multiple stakeholders.

"There's a lot of work to be done in terms of how someone would go about applying for this permit and the timeframe that will happen between now and then," Jennings says. "Folks may be lining up to challenge it in the interim, just on the potential conflict with the state constitution."

The potential constitutional conflicts arise because of amendments 20 and 64, which allow the medical and recreational use of marijuana in Colorado, respectfully. Amendment 64 includes a provision that says "nothing in this section shall permit consumption that is conducted openly and publicly or in a manner that endangers others."

Amendment 64 does not stipulate what "consumption" or "public consumption" entails. That gray area allowed proponents of I-300 to propose an initiative to allow "public consumption" in private businesses and away from the public. Those guidelines fall well within the law, Jennings says; however, if a citizen or business could prove that consumption at a certain venue would endanger others, they could file a lawsuit.

Amendment 20 is a little more clear: "No patient shall... Engage in the medical use of marijuana in plain view of, or in a place open to, the general public," the Amendment reads.

The vague language in Amendment 64 and the specific denial of public use outlined in Amendment 20 could potentially be used in a future court case around I-300, according to Jennings.

But for a group or an individual to sue the city or a business that applies for social use, the court would have to see that there is harm before moving forward with the case. The question is, "Does the harm just happen with the law going into effect itself, or does it actually have to be executed?" notes Tom Downey, former head of the Department of Excise and Licenses and now a regulatory attorney with Ireland Stapleton. "The court would have to decide whether the harm is immediate."

An example of a stakeholder who might be able to argue immediate harm is a business owner next door to an establishment that is filing for social use: The business could claim immediate harm because just the attention around this issue is affecting the business, even if any physical harm might not start until the neighboring establishment receives a license for social use.

Bottom line: Don't expect legal social use at any Denver venue in the next few months. 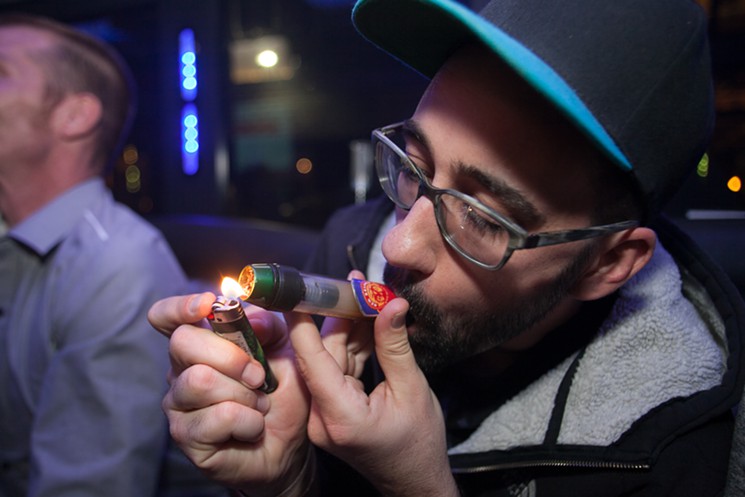