elect Kentucky farmers will be growing more hemp in 2016 than at any time since the federal government effectively banned the crop in the 1930s, along with its hallucinogenic cousin, marijuana.

This year, 144 farmers and 10 universities across the state will engage in the third year of pilot research projects in the state that many hope will lead to full restitution of hemp as a commercial fiber, feed and pharmaceutical agent.

"We anticipate over 4,000 acres will be grown in Kentucky this year, which is more than four times the number of acres grown last year," said Ryan Quarles, the recently elected state agriculture commissioner.

In fact, the Kentucky Department of Agriculture says about 4,500 acres of hemp will be grown for the projects this year, up from 900 acres last year and just 33 acres during the inaugural planting season in 2014.

Permission to grow the crop on an experimental basis is authorized under special language inserted into the federal farm bill by U.S. Sen. Mitch McConnell, R-Kentucky. Quarles said industrial hemp, once a major Kentucky farm staple, is highly marketable and hopes Congress will one day see it that way and legalize it.

"As long as it is grown and cultivated as part of a pilot program, it can be transported, processed and sold across state lines," said Jonathan Miller, a spokesman for the Kentucky Industrial Hemp Council. "Each year, the Kentucky projects are getting bigger, more elaborate and more successful."

Miller said that whether it's this year, next year or three years from now, he's confident Congress will "take hemp off the Schedule 1 drug list so it can be turned into an agriculture commodity and we won't have to deal any more with pilot programs."

Josh Hendrix, a Montgomery County farmer and director of business development for California-based C.V. Sciences, will be growing hemp again this year. He has formed a company, Hendrix Hemp, to be ready for the day he and others can freely sell his crops anytime, anywhere.

"We are still trying to figure out what varieties grow well here in order to produce whatever you want to produce from a hemp plant, whether it is fiber, grain or CBD," short for the compound cannibidiol, said Hendrix.

Since Kentucky growers must align themselves with a processor or manufacturer before they enter the hemp pilot program, Hendrix has become affiliated with C.V. Sciences, a California producer of dietary and health products. The company currently imports hemp from Europe but wants a dependable domestic source and hopes Kentucky and Hendrix will be its prime supplier.

Although Hendrix acknowledges that a farmer would need to grow a considerable number of acres of hemp for it to be highly profitable, he hopes the pilot program will explode into something big.

"We want to see hemp become like any other agriculture commodity in Kentucky," he said. "I hope it will become something that will put money in the pockets of our farmers. You want to be able to say you have domestically grown, U.S.-grown, Kentucky Proud hemp for sale."

University of Kentucky hemp researcher David Williams says the state's pilot programs focus on production science or production and management protocol to optimize crop yields. UK is a participant in the program and will be growing hemp.

A history lesson, courtesy of Williams: The main uses for hemp a century or more ago are quite different than how it could be used today.

"In the old days it was a major component of rope and heavy linen," said Williams. "Prior to the invention of steam engines, ships were wind-powered, and the sails were made of hemp cloth. The major recipient of Kentucky hemp then was the U.S. Navy for its ships' riggings and the sails. Neither of those components is viable today."

However, Williams says the loss of these old industrial markets is being met by modern needs and technology that provide exciting new possibilities. Among the new applications about which Williams is most excited is the potential for hemp fibers to be a component of injected, molded composite products such as the interior door panels of automobiles or the overhead compartments of airplanes.

"The list is almost unlimited, including bathtubs, furniture and much more," he said. "If those industries move toward replacement of synthetic fibers with natural fibers, hemp could contribute to that significantly."

Would the legalization of industrial hemp bring a windfall to Kentucky farmers and others? The enthusiasm for reigniting the industry has brought outsized hopes that Williams suggests are unlikely to be realized. Instead of a massive cash crop, Williams says, hemp is more likely to be more useful in rotation with other crops.

"I don't want the public to expect a financial boom. I think that's an unrealistic expectation," Williams cautioned. "Realistically, we might think of hemp becoming part of the normal rotation. It won't replace any of our current crops. Even if the market is highly significant, we still have to grow crops [and raise animals] for food."

In other words, hemp would have to compete with other farm commodities in the state. The top 10 Kentucky farm commodities are: poultry, livestock, corn, soybeans, cattle and calves, tobacco, dairy products, hay, wheat and pigs. Devoting acreage to hemp instead of another proven commodity might be a gamble, at least for now.

"It would be very difficult for me to imagine that that would be economical," said Williams.

"That was a common story in Kentucky then," said Quarles. "The federal government actually asked farmers to grow it for the war effort." 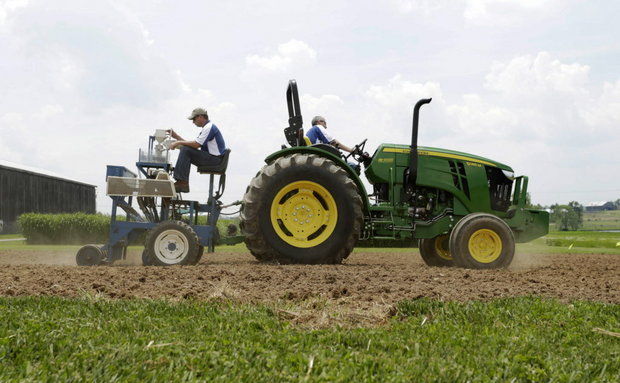