The District of Columbia will likely take a stride toward making pot legal this week, setting up a potent opportunity for Capitol Hill to weigh in. On the agenda for Wednesday's D.C. Board of Elections meeting is Measure 71, an initiative to legalize possession of up to two ounces of marijuana outside one's home for personal use and allowing D.C. residents to grow their own weed inside, while restricting use for residents under 21.

"It would be a shock if we didn't qualify for the [Nov. 4] ballot, and we would likely challenge it," said Adam Eidinger, chairman of the DC Cannabis Campaign. Pro-pot activists delivered more than 57,000 signatures to the elections board on July 7, which Eidinger noted is a "nice cushion" over the 22,600 valid D.C. voter signatures needed to qualify the measure for the ballot. If the measure winds up on the ballot, there's no doubt that loosening drug laws is a popular idea on the local level. D.C. residents favored legalizing the drug for personal use by a margin of almost two to one in a Washington Post poll released earlier this year. D.C. Councilmember David Grosso, an at-large independent, is floating his own bill to legalize, regulate and tax sales of marijuana in the District. Officials already made a paradigm shift on pot when the city relaxed criminal penalties on possession in mid-July.

During debate of the decriminalization measure, Democratic mayoral nominee Muriel Bowser raised concerns about the practical implications of removing criminal penalties for possession of small amounts of the drug without a legal means of buying it. She said dealing with how people could procure decriminalized pot had to be the next step, and was among the councilmembers who signed the petition to put Measure 71 on the ballot. Councilmember David Catania, who filed petitions on Tuesday to challenge Bowser as an independent, also backs legalization. Catania led the push to set up D.C.'s medical marijuana program and was among the first to object when the House moved to block decriminalization. According to his office, he will vote in favor of legalization in November.

Moving forward, pro-pot activists believe that once voters legalize possession and cultivation, chances are high the council will move to regulate the marijuana trade and the federal government could find itself forced to send a clear policy message. "Legalizing marijuana in the backyard of Congress and the president will be hugely significant for the national debate on this issue," predicted Tom Angell, chairman of Marijuana Majority. "When members and staffers can walk into a legal, regulated marijuana store that creates jobs and pays taxes while taking marketshare away from violent gangs and cartels, the previously theoretical benefits of ending prohibition will become real and tangible."

Angell acknowledged that members of Congress are likely to try to block the initiative. House Oversight and Government Reform Committee members have held a series of hearings to examine the tension between federal laws against marijuana use and distribution with local laws in places like Colorado. On July 31, one of its subcommittees dug into the dangers of driving while stoned. Rep. Andy Harris, R-Md., attached an amendment during the appropriations process to block D.C. from using local funds to enforce laws to decriminalize or legalize recreational use of the drug. The House approved the bill, despite a veto threat from President Barack Obama that specifically warned against intervening in the District's drug policy. The congressman would try to block legalization if the initiative makes it on the ballot, his office told CQ Roll Call.

Eidinger said he's decided D.C. "really just needs to ignore" what Harris is doing, because given the dysfunctional congressional appropriations process it's likely "irrelevant." The fact that pot opponents had to slip the measure in as a rider shows that there would be little support for overturning the law, he said. In November, Eidinger predicts legalization "is going to bring out more voters than the mayoral race." "If we pass this here, legalization will become a federal issue," he continued, giving the White House and Congress the opportunity to reschedule the drug. "Once passed, it will be a major milestone." 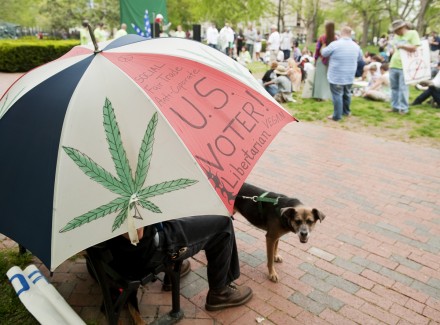 Grow your own issue and carry a stash with you.

That works for me!


"Grow your own" is going to bring a lot of drug company, anti-legalization money into the campaign.
Radogast

I remember a couple of months ago when everyone was saying 2016 was going to be the year of the weed but I believe 2014 has been a landmark year. I hve been absolutely delighted to read the news and check my FB to find nearly on a daily basis significant progress being made with very few days in between when progress has been lost. The gridlocked congress is just the bit of fuel on the fire that we need as anti-prohibitionist to get some real momentum for change as states go against federal law and even some cities go against state law. As much as I want this legalization to go through in DC any interfearance from congress might be the thing we need as a nation to start a real debate if it goes through successfully though there would be no way to take a law seriously that goes in compleate contrast to the law of the place where said law wsa made. if that make since.
J

Yeah, absolutely positively yeah. The drug rule making, profiteering, testing, arresting, incarcerting, and bureacratic apparatchik are all lining up next to the alcohol death dealers. Drug companies and even doctors stand to lose. I used to read stuff like this and think people paranoid wih pot and delusional. I see now how fucked up the world is because of cannabis prohibition. I see how wrong I ever was on so many things--except cannabis.

I think this sea change is happening right now, *this* millenium. It could be one reason Budweiser sold out. Thank you California, Colorado and Washington.

How fantastic to be witness to the change of the world.