Fresno County supervisors expressed frustration Monday with how they're handling medical marijuana cultivation appeals, but stopped short of one board member's suggestion that they suspend the hearings. Supervisors were assailed Monday by accusations of failing to address due process, not knowing the true meaning of a responsible party, failing to have foreign language interpreters available for people appearing before them and uneven issuing of fines. Monday's hearings – the second time the board has convened to hear medical marijuana appeals and nothing else – lasted nearly 5 1/2 hours and levied fines totaling nearly $900,000.

Supervisor Henry R. Perea suggested putting hearings on hold to seek clarity on what constituted a responsible party. "I think we just need to regroup," Perea said. But Board Chairman Andreas Borgeas said he didn't want to make a change midstream. "I don't want folks thinking we are going back to the drawing board and scrapping this," Borgeas said. Several more hearings were held after the Perea suggestion was scuttled.

County Counsel Dan Cederborg reminded supervisors that they have flexibility to apportion fines based on involvement of the property owner and can determine the responsible parties. Alexandra de la Puente, a Fresno law clerk, suggested that the board have foreign language interpreters available for the appeal hearings. During last month's marijuana appeal hearings, lawyers were concerned about a conflict of interest in having one person translate for another when both are subject to fines. Perea said the board didn't make a requirement to include county-paid interpreters for the appeal hearings, but did allow family members or friends to serve as interpreters.

During Monday's hearings, the board voted to charge nothing to a citrus firm that had recently purchased property previously used for marijuana cultivation and a second owner that was charged $1 of a $68,000 fine for his lack of culpability. A third property owner was hit with a $29,900 fine – 10% of the total fine assessed on his property. In yet another case, a man who owned the land where he was growing was fined $162,000. For Ricardo Contreras Zaragoza, that amounted to "a full on taking of this man's property," said Zaragoza's attorney, John Patrick Ryan.

Ryan said his client invoked his right under the Fifth Amendment to avoid self-incrimination when asked if he lived on the property or owned the 162 plants. Sheriff's officials said Zaragoza had told them he lived at the property, and that he wasn't aware of the county ordinance and believed his doctor's notice gave him the right to grow on his property. But Sheriff's Lt. Patrick Hanson and Sgt. Homer Montalvo also said they weren't present when the citation was issued to Zaragoza.

Ryan said his client's inability to face his accuser was a violation of due process. "We are going to impose a $162,000 fine and the only testimony is pure hearsay brought in by somebody who admittedly has zero personal knowledge," Ryan said. "We are not talking about a parking ticket I'm about to get out there for not feeding the meter." He said Zaragoza had no opportunity to remove the plants without finding that he had a nuisance and had no chance to be heard before the fine was imposed. Ryan said he intends to file a lawsuit in Fresno County Superior Court on due process issues. Cederborg said the county's abatement and citation process has been found in court to be legal.

Property owner Ricardo Melo was fined $1 and his tenant the remaining $67,999 after his hearing. He had included a no-drug policy in his rental agreement while also taking action to evict his tenant, Alfonzo Gonzales. Both Gonzales and his friend, Jose Sarabia, were found culpable for growing the plants on Orange Avenue south of American Avenue – property adjacent to Zaragoza's home and the site of a home-invasion robbery and killing that occurred over the summer because of marijuana cultivation, sheriff's officials said.

Supervisors approved a $29,900 fine against George Finley, a month after the board was deadlocked 2-2 on issuing it. Finley, who had a stroke last year and has been in the hospital and nursing homes, had no rental agreement with people who were on his property. His lawyer, Brenda Linder, said they were "squatters" and had no permission to rent or use his land, let alone grow 299 marijuana plants. She said the man accused of growing the plants admitted he owned them.

Linder, an outspoken critic of the ordinance who has defended several people fined because of it, said fines are being issued in a "haphazard and random" way, pointing to an afternoon hearing where supervisors issued a $1,000 fine to a man who had 107 plants. In the citrus firm case, Brandon Ormonde, lawyer for PAR Citrus, pointed out that the sheriff's deputies who went to the rural Reedley property could not determine if marijuana plants were on the land when company representatives had last been on the property. They had acquired the property about a month before deputies went to the site.

Real estate agent Lance Workman, who worked on the land sale, said he and his clients drove on the property at the start of escrow early in the spring and said "there was nothing that jumped out at us." In September, supervisors excused the previous property owner, Jenny Luangrath, who claimed she was living in Southern California when 316 marijuana plants were found on her property. Luangrath's relatives were fined $1,000 per plant, or $316,000, but Supervisor Judy Case McNairy questioned during Monday's hearing whether the board should have let Luangrath off without a fine. 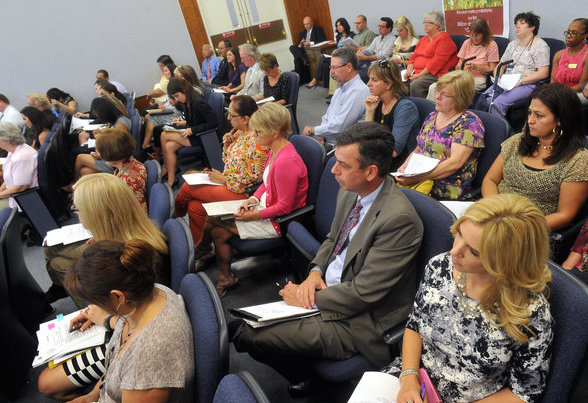