IN: Legalization Rally To Be Held In Greene County

A Legalization Rally will take place at the Greene County Courthouse on Saturday, Oct. 8 from 12-3 p.m.

The rally is part of a movement trying to reach each of the 92 counties in Indiana and is hosted by The Higher Fellowship, a group who self-describes themselves as "a group of individuals in support of the community."

Bobbie Young is the Executive Director of The Higher Fellowship, and will speak at the rally on Saturday, along with founders Dave Phipps and Tommy Heiser.

The rally will offer those who attend a chance to voice their opinion on a PA System in front of the courthouse during an open forum section.

"The main goal of the rally is to raise awareness of the issue," said Young, "The number one priority is to get medical marijuana legalized so the people in the state who suffer from things like cancer and PTSD can get the medicine they need."

One of the biggest problems for the movement is lack of education, according to Young. Young said while some refer to marijuana as a 'gateway drug', other states are treating heroin and alcohol addicts with marijuana.

Young said 42 states in the U.S. are currently using some form of medical marijuana and four of those have legalized recreational marijuana, a fact she wanted to be clear.

"Several states are also on the ballot currently," said Young, " Indiana is falling behind in the biggest economic game in the country, and with Indiana being an agricultural based state, it is sad to see us so behind in the green rush."

Known to some as the 'green rush', the movement to legalize marijuana begins with medical cannabis first, although it also would heavily impact the economy according to Young.

Young said the group is pushing for a positive change in Indiana, and the group believes legalizing cannabis will bring jobs, tax revenue and help put money back into the state.

"At our first rally we had three people, and at a more recent rally we had 108 people in Lake County show up. The news spread fast once people found out, cars were pulling over just to see what was going on and then joining in," said Young.

The rally in Lake County also brought about a presence of police force. Young said the policemen there told her the group that day was one of the kindest groups to rally there.

In states such as Colorado where cannabis is legal both medically and recreationally, Young said overdose death rates have decreased, a problem which has recently impacted Indiana severely.

"By keeping cannabis illegal, Indiana has forced the creation of a black market in our state," said Young. "Indiana farmers and local businesses are missing out on opportunities."

For those who might be too afraid to show support for the movement in public by attending a rally, Young had this to say:

"Contact us, contact me. We want to be the voice of the people. I've told people before, 'hey, I'm out here doing this in the public eye, and I've never had an issue."'

Some rallies in Indiana have included speakers such as mayors and political candidates, said Young.

After the Greene County rally Oct. 8, the next rally will be held in Bloomington on Saturday, Oct 29 at Dunn Meadow.

The Greene County Legalization Rally can be found on Facebook where those interested can learn more about the cause and The Higher Fellowship. 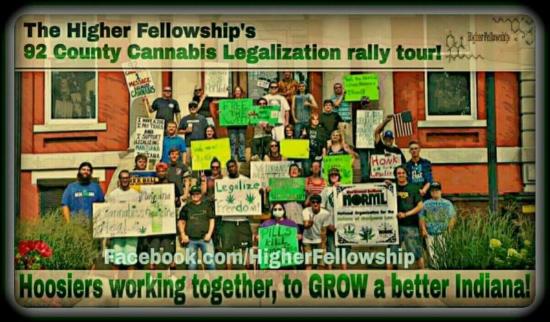 K
IN: Legalization Rally To Be Held In Greene County