A young boy who once suffered up to 30 potentially fatal seizures a month hasn't had one in over 300 days and his family are celebrating by hosting a festival to raise awareness about the positive effects of cannabis oil.

Billy Caldwell (11) has incurable intractable and status epilepsy, which cannot be controlled through medicine or diet and he cannot come out of seizures himself without rescue medicine and oxygen.

When he was a baby his parents were told to bring him home to die but his condition improved greatly after he spent two years getting specialist treatment in the US, before returning home in 2009, his mum Charlotte says the seizures "returned with a vengeance" in 2016.

Charlotte says she was a "desperate mummy" when she brought him back to the US last year, where he started receiving cannabis oil treatment.

After nine months there he was allowed home to Tyrone and his prescription was transferred to his local GP, he is now seizure free and has even had a cannabis oil named after him, Billy's Bud.

Charlotte says she can't believe how different things are for them now compared to a year ago.

"I never anticipated a year ago that he would even be still here today so I'm feeling really good and positive."

Charlotte, who lives in Crew Bridge in Castlderg, told Independent.ie that she is hosting a festival at her house next Saturday, September 9 to celebrate.

She said: "After Billy got his first prescription for CBD oil we had so many families calling us for help and information.

"We just felt we should bring them together, there's going to be a big indoor market with over 50 stalls selling things like CBD oil, organic food and crafts.

"There will be games, bouncing castles and face-painters for the kids, there's going to be buskers during the day and DJs at night and there's four food trucks coming so hopefully we'll have something for everyone.

"Plus we'll have doctors and politicians attending on the day and we really hope to educate people about the benefits of CBD oil."

CBD oil is able to help ease the symptoms of a variety of conditions, including chronic pain and epilepsy.

The Caldwells have set up the Billy's Bud charity to help other people avail of cannabis oil, which can be used as a food supplement.

Charlotte said: "Every penny raised during the festival will be used to help sponsor someone from a low-income family to avail of CBD oil.

"It doesn't matter if you're from the Republic of Ireland, Northern Ireland or the UK, if you fill out the assessment form on our website it will be sent to our independent committee to review."

The event has been organized with the help of groups including the Cannabis Collective UK, Legalize Cannabis Oil Northern Ireland and the Belfast Cannabis Club, who Charlotte said she "cannot thank enough." 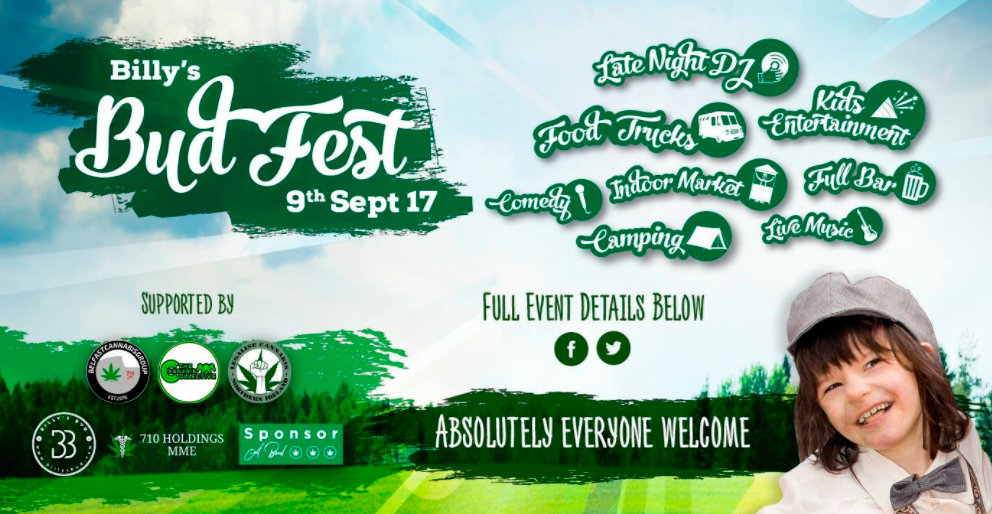