Last week, Deputy Attorney General James M. Cole sent a memo to U.S. attorneys about medical marijuana -- and rather than diminishing the paranoia of MMJ industry types in the wake of an earlier memo by U.S. Attorney Melinda Haag hinting at possible dispensary raids, it amplified them. Time to hit the panic button? Not according to Congressman Jared Polis, a vocal supporter of MMJ. But he remains disappointed with the Cole memo.

The Haag memo seemed to contradict a 2009 memo by Deputy AG David Ogden, which suggested that U.S. Attorneys shouldn't devote significant dollars and cents to prosecuting medical marijuana operations following the law in states that had approved MMJ. But while the Cole memo reiterates that "it is likely not an efficient use of federal resources to focus enforcement efforts on individuals with cancer or other serious illnesses who use marijuana as part of a recommended treatment regiment consistent with applicable state law, or their caregivers," the document stresses that the term "caregiver" means "individuals providing care to individuals with cancer or other serious illnesses, not commercial operations cultivating, selling or distributing marijuana." In other words, a dispensary isn't a caregiver.

Additionally, the memo maintains that there has been "an increase in the scope of commercial cultivation, sale, distribution and use of marijuana for purported medical purposes. For example, within the past twelve months, several jurisdictions have considered or enacted legislation to authorize multiple large-scale, privately-operated industrial marijuana cultivation centers. Some of these planned facilities have revenue projections of millions of dollars basedon the planned cultivation of tens of thousands of cannabis plants.

"The Ogden Memorandum was never intended to shield such activities from federal enforcement action and prosecution, even where those activities purport to comply with state law. Persons who are in the business of cultivating, selling or distributing marijuana, and those who knowingly facilitate such activities, are in violation of the Controlled Substances Act, regardless of state law. Consistent with resource constraints and the discretion you may exercise in your district, such persons are subject to federal enforcement action, including potential prosecution. State laws or local ordinances are not a defense to civil or criminal enforcement offederal law with respect to such conduct, including enforcement of the CSA."

The document also stresses that "those who engage in transactions involving the proceeds of such activity may also be in violation of federal money laundering statutes and other federal financial laws."

Polis's take? According to Chris Fitzgerald, his communications director, "the congressman's preference would have been for the Justice Department to step up and lift the threat of arrest and prosecution and make it clear that state-endorsed, voter-approved medical marijuana businesses aren't going to be raided. Unfortunately, they didn't take that far a step.

"But at the same time, the memo doesn't seem to alter the Ogden memo significantly," Fitzgerald goes on. "It still provides U.S. Attorneys with discretion when it comes to prosecutions, and we would urge them to use that discretion."

Indeed, Polis continues to believe that regulation of the sort enacted by Colorado "is the most appropriate approach to medical marijuana," Fitzgerald says. "The voters of Colorado have approved it, and it's shown to be a revenue raiser for the state. It ensures that medical marijuana users are able to get access to help alleviate their pain and suffering. Colorado's approach simply makes sense, which is why the congressman is asking that the federal government step aside and allow states to effectively regulate their medical marijuana industry."

Along these lines, Polis has authored the Small Business Banking Improvement Act, which is intended to guarantee access to financial services for medical marijuana businesses. The idea, notes Fitzgerald, is to prevent "the federal government from using the Bank Secrecy Act to intimidate banks that do business with medical marijuana businesses that are fully legal. They deserve access to the same type of financial services that any legal small business in Colorado has."

Polis is also a sponsor of bill by Congressman Barney Frank that would immunize individuals and businesses against federal prosecution for marijuana offenses if they're following state MMJ laws. And although the measure doesn't remove marijuana from the list of Schedule 1 drugs, Fitzgerald points out that "it basically directs the administration to begin the process of rescheduling, so that it's not either Schedule 1 or Schedule 2." After all, he says, "Schedule 1 basically says marijuana has no medicinal purpose whatsoever, which we believe simply isn't the case."

In short, "the congressman believes the prohibition policy that's currently in place has failed, just like it failed with alcohol, He believes in state regulation is a more effective way to keep marijuana out of the hands of children. The drug dealer on the corner doesn't care who he sells to, but a strictly regulated system would keep it away from children and free up resources to go after truly violent criminals. That's a smarter approach to dealing with drugs."

Likewise, Polis feels prosecuting MMJ businesses blessed by Colorado's government "is counterproductive," Fitzgerald allows, "and they shouldn't be under the threat of arrest or prosecution." 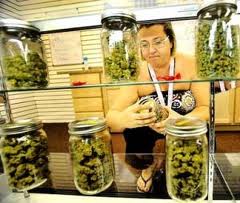