HARRISBURG – This year Kentucky farmers will grow and potentially sell more than 12,000 acres of industrial hemp, according to that state's Department of Agriculture.

Hemp farmers get as much as $21,000 per acre, meaning the Kentucky program could generate crops worth upwards of $252 million this year, according to U.S. Department of Agriculture estimates.

Pennsylvania, meanwhile, will have just about 80 acres of hemp to harvest this year and won't be able to sell any of it.

The Department of Agriculture has approved 16 research projects, each of which can grow five acres of hemp. That's less than half the 40 projects state officials had projected might be approved in this first year of Pennsylvania's hemp program.

That outrages growers who say the Wolf administration has bungled the roll out of industrial hemp three years after the 2014 Farm Bill that gave the green light for states to OK farming of the historic crop.

His group is involved in three of the 16 research projects approved by the agriculture department. That includes a project to determine if growing hemp on polluted ground can help clean the soil. Another project would determine if hemp fibers conduct electricity well enough to be used as components in electrical cars, he said.

Whaley said the agriculture department has sought little input from hemp growers. Though one of the few communications he got was a tip from the department that he'd like the regulations when they came out.

"That was the furthest from the truth," he said.

The state's rules require growers to pay $3,000 to participate and the growers can only conduct research and cannot sell anything they grow.

Penn State plant science professor Greg Roth agreed that the state's response hasn't been as ambitious as Kentucky, which he said has taken a more "liberal" interpretation of the Farm Bill's hemp rules.

Roth's plant science program will be doing research into things like the best practices for growing hemp in Pennsylvania and identifying pests that might threaten the crop here, he said.

State Sen. Judy Schwank, D-Berks County, said that the comparison to Kentucky isn't fair because that state is a couple seasons into its hemp program. Kentucky's first hemp season was 2014 when the state had just 33 acres planted, according to that state's Department of Agriculture.

Pennsylvania didn't authorize the new hemp program until last year. Schwank was one of the lawmakers who led the effort to get the state's industrial hemp law passed.

Whaley argues that the comparison to Kentucky is appropriate. Historically, Kentucky and Pennsylvania had been rivals as the nation's leading producers of industrial hemp. The Conestoga wagons that carried pioneers west were covered in fabric made from hemp grown in Lancaster County, he said.

For their part, agriculture officials say they appreciate the historic importance of the hemp crop and recognize its potential.

"We now have the chance to re-establish this promising plant in Pennsylvania, which we believe could offer farmers tremendous new opportunities down the road," said state Secretary of Agriculture Russell Redding in a statement announcing the research projects. "The first step in realizing those opportunities, however, is to demonstrate the viability and the potential of the plant through these research projects."

"We are taking a cautious first step," said McCann. "We're looking forward to expanding" but the agriculture department deemed that the effort was too important to rush.

Schwank said she was concerned about the cost of the projects. She was somewhat reassured by the agriculture department's decision to offer a refund for part of that cost.

Schwank said that after the research projects are done, she hopes the state will drop the barriers and let farmers grow hemp commercially. That would likely require another round of legislation, either in Harrisburg or in Washington.

U.S. Rep. James Comer, the former Kentucky agriculture secretary who led the push for hemp in that state, is now in Congress. He has indicated that he will introduce federal legislation to reclassify hemp so that it's no longer treated like a drug.

"We may need to do legislation," Schwank said. "I'm hoping the federal government does it."

Schwank said the biggest hindrance to the hemp program may be that it's overshadowed by the state's push to get medical marijuana up and running at the same time.

"We are also embarking on the medical marijuana program and that's a much larger task," she said. "I think that has in some ways hindered" the hemp program.

Whaling said the state's medical marijuana program offers more immediate commercial opportunities, so he has also put an application to get one of the processor/grower licenses available to supply medical marijuana.

The deadline is Monday for applications for the 12 grower/processor and 27 dispensary permits for medical marijuana. April Hutcheson, a health department spokeswoman, declined to say how many applications have been received by the department prior to the deadline. But in announcing the application process, Health Secretary Karen Murphy said the department had been contacted by 900 potential operators of dispensaries and growing and processing ventures.

The conflict with the medical marijuana program irks Whaling.

"Why are they treating hemp more harshly than medical marijuana?" he asked. Still, Whaling said he believes in the potential of hemp.

"We are determined to make this a billion dollar industry," Whaling said. "It has that potential." 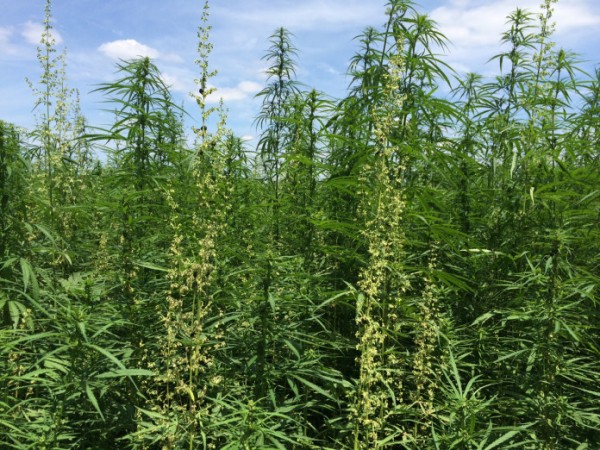