Congressional leaders are moving full steam ahead to finally make hemp a legitimate agricultural crop in the United States. Lawmakers introduced the bipartisan Industrial Hemp Farming Act of 2015 on January 8th in the Senate (S. 134) and its counterpart (HR 525) on January 22nd in the House of Representatives. If passed, it would remove industrial hemp from the Controlled Substances Act list of Schedule I drugs, where it currently sits alongside high-risk drugs like heroin and LSD.

The law would distinguish industrial hemp from marijuana, defining industrial hemp as containing less than 0.3% delta-9-tetrahydrocannabinol (THC). THC is the main psychoactive cannabinoid in marijuana.

"Oregon and Kentucky are among 20 states that have already defined industrial hemp as distinct from marijuana and removed barriers to production. However, under current federal law, farmers in states that allow industrial hemp research and pilot programs must still seek a waiver from the Drug Enforcement Administration [DEA] or risk raids and seizures by federal agents," said Senator Ron Wyden (D-OR), who introduced the Senate version of the Industrial Hemp Farming Act of 2015.

The hope of many is that industrial hemp will one day become a premier, high-value crop in the United States. The ban on hemp growing in the U.S. means that American farmers have long missed out on the opportunity to profit from this burgeoning market. While the United States is the largest market for hemp, any hemp ingredients currently on the market in the United States are imported from foreign countries where hemp growing is legal, including Canada and China. Without the ability to grow on U.S. soil, U.S. researchers have also missed the opportunity to study the agriculture of hemp in this country, including optimal growing practices and regions.

Should the Industrial Hemp Farming Act of 2015 become law, those researchers and farmers will be able to start closing the knowledge and financial gaps. The bill has strong bipartisan support already. The Senate bill, introduced by Senators Wyden, Rand Paul (R-KY), and Jeff Merkley (D-OR), is also cosponsored by Senate Majority Leader Mitch McConnell (R-KY). The House bill, introduced by Congressmen Thomas Massie (R-KY) and Jared Polis (D-CO), has the support of a bipartisan coalition of 45 lawmakers.

De-scheduling hemp as a Class I substance would further "remove DEA from the equation," prohibiting the agency from enforcing against growers of legal industrial hemp, says Chris Boucher of hemp distributor US Hemp Oil (San Diego, CA). The DEA already saw its enforcement power over hemp wane in late 2014, when Congress cut DEA funding from the congressional spending bill, effectively prohibiting the agency from going after medical marijuana dispensaries in states where dispensaries are legal.

Americans largely want industrial hemp to be legal, lawmakers say. "Voters across the country have made it clear that they believe industrial hemp should be regulated as an agricultural commodity, not a drug," said Representative Earl Blumenauer (D-OR), who played a key role in the loosening of hemp bans in the 2014 Farm Bill.

With demand from constituents at a high, Boucher says lawmakers are making industrial hemp legalization a priority, underlined by the fact that this bill was introduced at the very start of the 114th Congress this January. "This is one of the top issues in agriculture in America right now," Boucher says.

"I'm optimistic that we can get the Industrial Hemp Farming Act to the President's desk this Congress," said Representative Massie, in a press release.

Many hope that the second time is the charm. HR 525, the House version of the bill, was previously introduced in the House during the 113th Congress (2013-2014)–but before the passage of the Farm Bill, which has since further relaxed hemp regulations.

Thanks to the Farm Bill, the first hemp seeds were planted on U.S. soil at Murray State University in Kentucky in May of last year, and many hope that passage of the Industrial Hemp Farming Act of 2015 would be the beginning of industrial hemp in America. "If the Massie bill passes, it means any farmer can now grow hemp, and we no longer have to gather at the border of Canada and watch them grow this valuable crop. We'll be able to grow it ourselves," AHPA's McGuffin says. 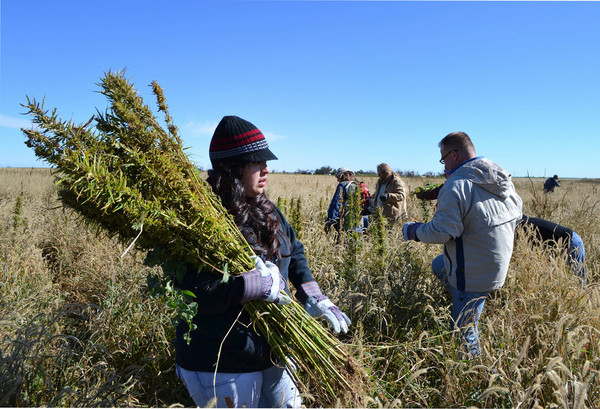