The first medical marijuana dispensary ever to hit Harvard Square has officially opened its doors.

Healthy Pharms Inc., a registered nonprofit medical marijuana dispensary, opened for business within The Red House restaurant at 98 Winthrop St. Saturday. The shop will be open daily from noon to 6 p.m.

The Cambridge location marks the second dispensary run by Healthy Pharms, a Georgetown, Mass.-based business that cultivates and processes its own marijuana.

The opening of the Harvard Square joint follows months of controversy. Some Cambridge residents and store owners previously alleged Healthy Pharms would likely have a negative effect on the area.

One Square businessman—Raj K. Dhanda, the owner of Crimson Galeria—even sued to block the medical marijuana dispensary. Dhanda filed a complaint in federal court against Healthy Pharms in early September, claiming at the time that his businesses have been “substantially injured by a conspiracy to sell marijuana.” The lawsuit is ongoing.

Dhanda declined to comment on the opening of the dispensary. In a phone call Saturday morning, Dhanda said he had nothing to say.

In February, the Cambridge City Council modified the zoning regulations for medical marijuana dispensaries to permit up to "five or six" new dispensaries in the city, as long as each dispensary complies with state and local law. The regulations do not mention federal law.

Healthy Pharms ultimately secured all the required approvals, according to Paul W. Overgaag, the chief financial officer of Healthy Pharms. Overgaag said he was “totally excited” for the store’s opening.

“I hope it will bring more customers for Harvard Square,” he said. “For every one dollar spent on medical marijuana, it is estimated that four dollars are spent in the area around it.”

Though Overgaag said Healthy Pharms plans to keep its Cambridge location open for years to come, he said he recognized that, due to the controversial nature of marijuana, potential problems could light up in future.

“It would be silly of us not to be ready for something to come up,” he said. “You always have to be prepared for something unforeseen.”

Overgaag declined to comment on whether the dispensary may pursue a recreational license going forward. The Massachusetts Legislature gave recreational marijuana shops the green light to begin operating in the state over the summer, but the Cambridge city government is still hashing out the details of how this would work. The body could begin approving recreational licenses in spring 2018.

Overgaag already owns two other properties in the Square: the eatery and bar Charlie’s Kitchen, at 10 Eliot St., and The Red House, the restaurant that now shares its Winthrop St. digs with the dispensary. Denise A. Jillson, executive director of the Harvard Square Business Association, noted Overgaag has been a property and business owner in the Square for a long time and said she thinks he is “highly respected” in the area.

Jillson said that, when the Business Association board voted on whether or not to support the dispensary, 22 out of 23 board members voted to endorse the concept.

“We are pleased to see that Paul is opening today,” Jillson said. “We look forward to [Healthy Pharms] being a community partner: they have already joined the organization.”

Jillson added she thinks Healthy Pharms will have a positive impact on Harvard Square business.

“We expect that as with all good business, whether retail, restaurant, or medical marijuana dispensary, that giving people options, a variety of options, giving them good reasons to come to the Square, it’s always helpful,” she said.

Though the Square has opened its arms to medical marijuana, Harvard still bans the use of the drug. According to the student handbook, “federal law prohibits the possession, use, or distribution of marijuana, including for medical purposes, on Harvard property or as part of a Harvard activity.” 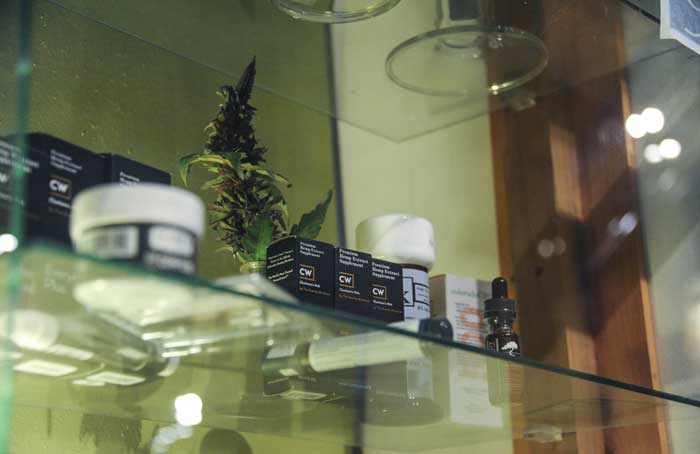 I hope by the time I am able to visit them again once I replace my lost drivers license as here you need BOTH a state approved license or drivers or passport AND mmj license to get in. Not Just one like CA sadly. But it's probably for the best.
I was denied access to meds and have been forced to use dirty old shit flower for meds because of this but I still agree for the best overall despite my current struggle. Best of luck to them.
You must log in or register to reply here.
Share:
Facebook Twitter Reddit Pinterest Tumblr WhatsApp Email Link
Top Bottom