The city of Laurel is one step closer to having its first medical marijuana dispensary opening on Baltimore Avenue, one of two dispensaries permitted in state legislative District 21.

The Planning Commission unanimously approved a special exception application Dec. 12 for the licensed facility Blu Pharms, requiring owner Kal Shah to meet specific criteria under the city's Unified Land Development Code. Blu Pharms will go before the Board of Appeals Dec. 28 prior to filing for a use and occupancy permit.

If the permit is granted, Shah said Blu Pharms will begin construction planning in mid-January. Shah, an entrepreneur, said he and two partners hope to open the 3,000-sqaure-foot facility by early April in the Tower Plaza shopping center off Route 1 at the intersection of Baltimore Avenue and Cherry Lane.

The dispensary will join 11 other businesses on the property. Shah said he plans to hire between 5 and 7 employees and will be open six days a week.

"We're going to build a very upscale dispensary that's going to be a combination of a retail and therapy experience," Shah said. "We want people to feel welcome and make this an experience for our patients, not just a pharmacy."

Shah said he plans to work with all 14 licensed growers in the state to provide an array of products, such as pills and patches, and strains.

"This dispensary, like any other dispensary in Maryland, is not open to the public," Shah said. "People can't just walk in and access the medicine. You have to get a prescription and recommendation from a physician or nurse practitioner and register yourself within the state of Maryland system."

More than 17,000 consumers in the state have registered for medical marijuana, according to the Maryland Medical Cannabis Commission's data.

The state's first dispensaries opened in early December, four years after the General Assembly passed a law legalizing marijuana for medical use. So far, the state has issued licenses to 10 dispensaries out of the 102 pre-approved dispensaries, said Lori Dodson, deputy director of the Medical Cannabis Commission. Five have opened, in Cumberland, Bethesda, Rockville, Ijamsville and Frederick.

There are currently two dispensaries per district, Dodson said. Blu Pharms and Pure Hana Synergy received pre-approval to operate in District 21, which covers Prince George's and Anne Arundel counties. No exact location has been identified for Pure Hana Synergy.

In Howard County, Greenhouse Wellness in Ellicott City and Remedy Columbia are set to open in the coming weeks and are awaiting product from marijuana growers.

Shah, an Ellicott City resident, said he became interested in medical marijuana dispensary operations in 2015, a year after marijuana was legalized for medical purposes in the state. Shah was a computer web developer for 14 years at the Johns Hopkins University Applied Physics Laboratory in Laurel and owns two liquor stores and a Subway in Windsor Mill.

In addition to attending Medical Marijuana Commission meetings since 2014, Shah said he formed a partnership with professionals in the industry in California, Oregon and Arizona.

Zoning requirements were less stringent in the city, which has its own planning and zoning regulations, Shah said, compared to Prince George's County. For example, county legislation initially required a 500-foot buffer between a medical marijuana facility and residential or school zone. The Prince George's County Council reduced this buffer to 300 feet in November.

"It's a different business," Love said. "The key for any government, especially local, is to keep up with the times. The state approved [marijuana] for medical use, so we're getting in line with that. As with anything new, we'll see how it goes."

The special exception also requires the dispensary have no affect on people's health, safety or welfare, or surrounding properties and neighborhoods. Love said the dispensary cannot create noise, vibrations, fumes, odors or dust, or disrupt other city operations, such as police and fire departments, water, sanitation or public roads.

"The services provided by this type of dispensary are services sought out by the thousands of Maryland residents with prescriptions for this type of medication," Betman said. "We believe the city and the residents of Laurel benefit from responsible businesses located within the city."

"We definitely see the medical benefits," Russell said. "It's very controlled and I think it will bring a lot of benefit to the patients who need it."

Shah said Blu Pharms will work with the Laurel Police Department to mitigate any problems.

"We believe Laurel is a good location because it is central to the district," Shah said. "It's a growing and changing community and I think it's going to be a very successful location." 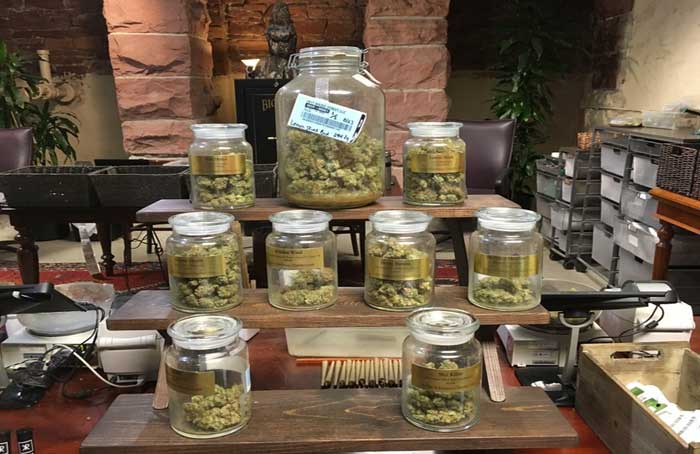