On Monday, medical marijuana patients and advocates gathered in the room adjacent to the chamber where the Massachusetts State House of Representatives assemble to discuss how the Commonwealth ought to proceed with the licensing process for medicinal cannabis dispensaries. As of today, September 22, Massachusetts and the medical marijuana program's overseer, the Department of Public Health, have yet to allow a single dispensary to open its doors here in the Bay State. It's been almost two years since residents voted to allow for cannabis treatment per ballot initiative back in 2012, it appears there's more waiting to be done for those most in need of the remedy.

Matthew Allen, executive director of the Massachusetts Patient Advocacy Alliance, hosted the press conference and while he didn't want the focus of the meeting to be about criticizing and blaming Governor Deval Patrick's administration for its inability to take sound leadership of the initiative, the frustration with the Alliance and those patients who testified against Beacon Hill's inaction was abundantly apparent.

"We're not interested in placing blame," said Allen in his opening remarks. "But five months later, there's plenty of blame to go around." Allen was referencing his last meeting back in April pertaining to the licensure of dispensaries statewide in which he was advised to continue doing what he and patients have been doing for almost two full years: Be patient. Several people took to the podium after Allen, all of whom are suffering because the afflictions plaguing them and their loved ones can be quelled with the use of medical marijuana.

First to speak was Lisa Cole who, joined by her husband and young daughter Madison, was noticeably distraught because of the fact that they're unable to provide cannabis-induced relief to six-year old Maddie, who battles bouts with seizures up to 20 times per day. Maddie is developmentally equivalent to a one-year old and has been unable to progress since that age when her seizures began to take hold. She's always outfitted with a protective helmet and walking harness, and has undergone pharmaceutical treatment for the past five years, but unfortunately for her nothing has proven to alleviate her pain. "We demand access to the cannabis treatment that can save Maddie's life," her mother Lisa appealed to Governor Patrick. "Please look at Maddie and tell her why you won't help get her childhood back."

According to the law passed by the people of Massachusetts, within 120 days of the law being enacted, medical marijuana treatment centers were to have registered with the Department of Public Health. Also, the department was to have issued up to 35 dispensary licenses with no more than five in each county with the ability to increase or modify the number of registered treatment centers if need be.

The law also states that upon receiving registration, dispensaries and treatment centers "shall not be penalized or arrested under Massachusetts law for acquiring, possessing, cultivating, processing, transferring, transporting, selling, distributing, and dispensing marijuana, products containing marijuana, and related supplies and educational materials, to qualifying patients or their personal caregivers."

Because no dispensary has been completely registered people are getting penalized and arrested, they're turning to sketchy black market sources and ultimately they're being denied suitable care. The 120 day mark after the law went into effect on January 1, 2013 would've been May 1, 2013. As you know, roughly two-thirds of the year 2014 has now come and gone and not a single dispensary has put a single seed in the ground.

For people like Dr. Peter Hayshi, a former neuropsychologist who suffers from allodynia, and Eric McCoy who's battled multiple sclerosis for the past two decades, perpetual pain is a daily occurrence. Dr. Hayshi's allodynia means he incurs pain due to hypersensitivity — a change in temperature, a stiff breeze or even sweating can cause him to keep over. The only time McCoy isn't bound to his wheelchair is when he's in the comfort of his own home, though he has nobody to aid or assist him should anything take a turn for the worse. "I can't get up, cook dinner, hug my kids or do homework," said Dr. Hayshi. "I'm very disappointed we're at this stage of no-progress." Allen and his constituents went on to deliver a letter to Governor Patrick's office outlining their concerns and ideas to expedite the licensing process. He also mentioned that the Alliance is looking into litigation that would lawfully hold Beacon Hill accountable for its idleness.

In the meantime, MassDPH has allowed for 11 of the more than 180 initial dispensary applicants to proceed to this point in the process, collecting tens of thousands of dollars in application fees all the while. The 11 dispensaries were determined by the DPH for their ability to cater to 97 percent of patients within a 30 mile radius. But that number is simply unacceptable for if you've driven the back roads of Massachusetts, added Allen, you know that a 30 mile drive can take up to 45 minutes or more to reach the destination. Karen van Unen, executive director of MassDPH's Medical Use of Marijuana Program said back in June that dispensaries could open as early as November barring any setbacks. 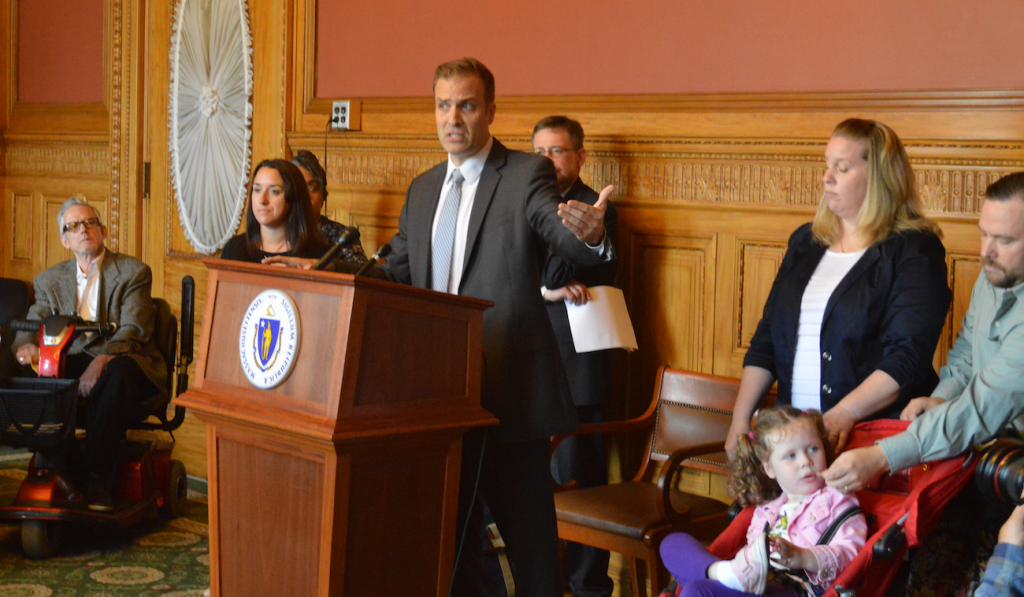