Hemp is taking root again in the United States after decades of prohibition. Congress' latest farm bill green-lighted hemp on farms that haven't been able to grow the crop since World War II. But in order to plant legal hemp, farmers need legal hemp seeds. Hemp booster Chris Boucher is happy to provide them, free of charge. The only problem is that his seeds keep getting seized. Boucher is the kind of hemp advocate who's always wearing at least one item of hemp clothing. When I met him at the San Diego office of U.S. Hemp Oil, he was wearing a hemp shirt with a helpful "hemp" label right on the pocket.

"It's actually very comfortable," he assured me. Boucher brought out a bucket full of seeds, which he hopes will be used to make many many more hemp shirts – plus cosmetics, foods, car materials and other products. But the Drug Enforcement Agency considers the seeds in his bucket a controlled substance. Boucher said: "You could probably go to prison for about 10 years having this bucket of seed, depending on who interpreted the law." The DEA interprets the law by lumping hemp in with marijuana. The way the feds see it, both plants belong to the cannabis family. Both contain the psychoactive ingredient THC. Both are illegal. Nevermind that the level of THC in hemp is miniscule. "There was an old saying back in the '20s: Only dopes smoke rope."

Planting hemp seeds in the U.S. has been illegal for most of Boucher's career. But selling hemp-based products has been mostly fine. Boucher built his first business, Hempstead Co., entirely around those products. "We sold hemp to the Beatles Anthology for music merchandise. We sold hemp hats to Disney for the Indiana Jones hat." He had to import everything. But this year, Congress gave states the go-ahead to approve hemp cultivation for research. Plenty of farmers have now obtained hemp-growing permits from the Department of Agriculture. But when it came time to buy seeds, these farmers scrambled to find a reliable supplier. "There have basically been under-the-table transactions," Boucher says. "No one's really publicized where they got their seeds."

Boucher tries to do business above board. He doesn't mislabel shipments to trick customs. And he doesn't sell his coveted seeds at high mark-up. He donates them; and he's become very popular lately. "We've had hundreds and hundreds of calls," he said. "I mean our phones ring every day about people wanting to grow hemp." The bucket in Boucher's office pales in comparison to his total seed supply. "We've got about 7 metric tons – I believe somewhere around 14,000 or 15,000 pounds of seed." But recently, two of those metric tons were seized by the DEA in Los Angeles. "We had these seeds promised to people in Colorado, in Kentucky," Boucher said. "They cleared their fields, they were ready to plant. And they're not going to get their seed."

That means they'll have to wait another year to plant a viable crop. The seizure wasn't exactly a surprise. Earlier this year, the DEA tried to prevent seeds from getting to farmers in Kentucky. Lawmakers there, even Republicans like Rep. Thomas Massie, weren't happy. The DEA eventually gave up the seeds in Kentucky. Some of Boucher's donations are now in the soil at Murray State University. Boucher has been fighting this fight long enough to know nothing goes smoothly with hemp. Twenty years ago, he made hemp history in the Imperial Valley. "This field you see behind me here, is a hemp field," Boucher says in grainy VHS footage from 1994. "The location you're looking at is Brawley, California." He got permission from the local USDA Research Center to grow a test crop on a 1-acre plot. The tapes show tall green plants towering over Boucher's head.

But the crop didn't last long. Local drug enforcement agents came out and tested the plants. When they returned positive for THC – even just trace amounts – the crop was plowed under. "Believe it or not, I thought within two years we would have a factory up and running, there would be 10,000 acres. And here it is, 20 years later; you know, marijuana's legal but industrial hemp isn't." Boucher plans to challenge the DEA's latest seizure of his hemp seeds in court. Despite all the legal tangles, Boucher said there's hope for hemp. He said there's been more forward momentum in the last six months than in the last 25 years. He hopes to one day get his company's hemp not from Canada or France or China, but from a few miles away, in the Imperial Valley. 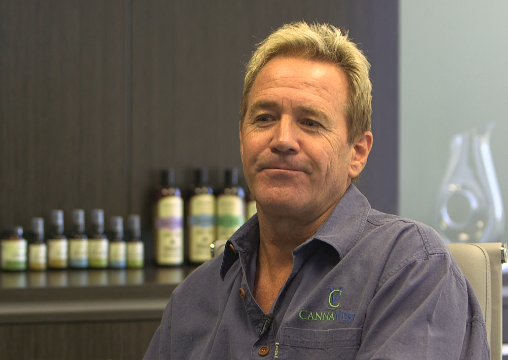