Political activist and candidate for US Senate Chief Wana Dubie was permitted Thursday to hold a hemp demonstration on the courthouse square April 23. Wana Dubie said his initial wish was for his Hemp Day rally to take place at 4:20 p.m. April 20, but the commissioners said a Wednesday afternoon event may interfere with regular business. After negotiations, Wana Dubie agreed to move the event to the following Saturday.

"I want to bring awareness to a product that I think could help this county," Wana Dubie said. "We need jobs here. I would like to put a flag factory in Dent County which makes old glory out of hemp."

The commission asked Wana Dubie for details of what he was specifically planning for the event. The Chief said he foresees a festival-like atmosphere of flyers being handed out, petitions, music and that he would personally be selling campaign t-Shirts. Wana Dubie also promised that no physical damage would be inflicted on the property.

"We're not planning to wrap the courthouse in hemp and march around it for seven days blowing trumpets," Wana Dubie said. "I am not going to plant anything on the courthouse lawn."

Prosecuting Attorney Andrew Curley was at the meeting Thursday and spoke to the county's position.

"We acknowledge that Chief Wana Dubie has the right to peaceful assembly," Curley said. "We will not do anything to interfere with his rights."

At the meeting Wana Dubie presented his hemp ball for the commissioners to review. Wana Dubie said it has been grown by public donations and he doesn't know how large it will be by April. He said he will not install it onto the courthouse lawn and is hoping to find a place to put it under glass in Salem if it is recognized by Guinness World Recorders.

Wana Dubie also showed the commissioners a voodoo doll he created which was labeled "deceivers." 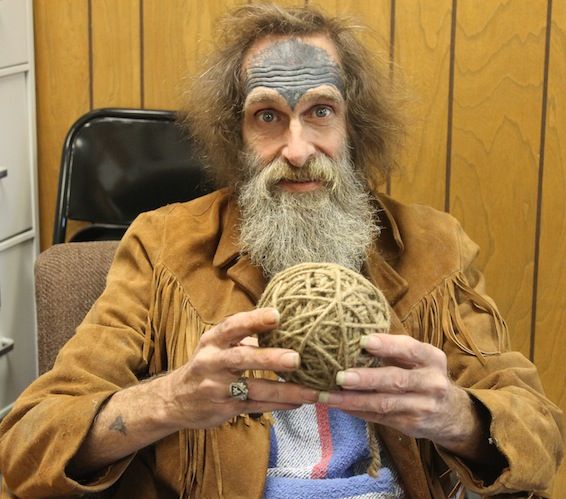