The National Drug Law Enforcement Agency on Thursday seized 34,030 kilogrammes of Cannabis sativa popularly known as 'Indian hemp', in a warehouse in Akure, the largest single haul since the establishment of the agency's Command in Ondo State.

In a statement on Friday, the anti-narcotics agency said it acted on a tip-off on suspicious activities activities at the Shagari Housing Estate in the state capital.

"The total weight of the seized drug is 34,030kg with an estimated street value of 364 million naira", the agency said in a statement.

"We began evacuation of the drugs since 4 a.m. with twelve vehicles and the operation lasted over twelve hours. As we speak, three sensitive operations involving the destruction of cannabis plantation are going on simultaneously".

The two suspects arrested in connection to the drugs — Collins Nmor, 35, and Godday Chibuzor, 27 — are currently assisting NDLEA investigators with "useful information", the agency said.

Reacting to the development, NDLEA Chairman, Ahmadu Giade, said the discovery of the illicit drugs in a residential area "is laudable".

"I commend the officers for this landmark achievement in the agency's supply control efforts", Mr. Giade said.

"We shall continue to provide logistic support to officers in eradicating illicit drugs from our society. Let me assure you that no drug baron shall go unpunished and the building used for the storage shall also be forfeited to the federal government".

The NDLEA boss, who pleaded with members of the public to report suspicious drug activities to the agency, also directed that discreet investigation be conducted with a view to bringing more members of the drug cell to book. 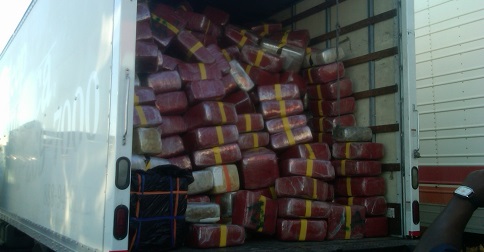