Nigeria - Operative of the Nigeria Drug Law Enforcement Agency (NDLEA), Ogun State Command said it has discovered 30 hectares of cannabis sativa (Indian Hemp) farms inside Ayepe forest reserve, in Odogbolu Local Government Area of the state and arrested five persons in connection with the farms. The state Commander of the NDLEA, Mr Bala Fagge said operative from the Command got hints about the farmland through intensive surveillance and investigation.

According to him, it was the resolve of the NDLEA to take the battle to the farms and destroy cannabis sativa in cultivation instead of waiting for the farmers to harvest the illicit drugs and take it to the market before pouncing on them. He said to clean the markets of cannabis Sativa when the farmers had pushed it there would be difficult for the agency to mop up 40 or 60 per cent of it.

Fagge said: "this is Ayepe forest reserve, we are at a cannabis plantation to destroy cannabis on over 30 hectares, we are here to cut it off and set it ablaze to ensure that cannabis cultivation are destroyed and serves as signal that it has no place in Ogun. We are also doing this to chase away cannabis cultivators from our forest reserve. "This is a system we have developed to follow them to the farm because if we allow this cannabis to enter the society, we will not be able to mop up 40 or 60 per cent of it, but when you come to the farm, you are sure of hundred percent destruction and this cannabis that is being burnt are on 30 hectres that had been cultivate and ensure that no cannabis enter the market."

The NDLEA boss in the state appealed to land owners to be mindful of who they lease their landed property to avoid encouraging cultivators of Indian hemp unknowingly. Fagge explained the Command had seized over 3560 kilogram of cannabis sativa while about 46 farmlands filled with the prohibited drugs were also destroyed since year 2013 began. He said: "in the year under review, NDLEA Ogun state command had been able to seize over 3560 kilo grams of cannabis sativa, apart from destruction of farms that we had carried out. Before the destruction of these 30 hectares, we have already destroyed 46 hectares and we are going to other forest reserves, which I will not disclose for security reasons."

According to him, 72 suspects with 53 of them standing trial, while 23 similar cases are pending at the federal high court sitting in Abeokuta. Also, the Supervisor for Agriculture and Natural Resources in Odogbolu Local Government, Mr. Faith Idowu who expressed shock at the discovery of the farms, said the Council would support the Anti - drug agency to check the spread of cannabis cultivation in the state. Idowu said: "on getting here, we are surprised to know that over 30 hectares of our land are being used to cultivate cannabis sativa. We are going to start campaign against the issue of cannabis cultivation. Also, we will join hands with NDLEA to inform them about any farm of Indian hemp in our local government." 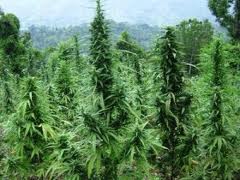