According to a press release by the DCMJ, co-founders Adam Eidinger and Nikolas Schiller will be meeting with key Obama administration officials. The activists want the US government's anti-cannabis laws revoked and the plant re-classified from its present status that invites criminal charges.

Thanks to local laws, in Washington D.C, it is legal to keep two ounces of cannabis for personal use.

"This is an opportunity for the White House to meet with serious and committed cannabis activists and hear our case for why it's in President Obama's best interest to work with the attorney general to fully remove cannabis from the Controlled Substances Act, " stated DCMJ communications director Schiller, reports Green Rush Daily.

According to the activists, the federal laws still consider cannabis as a Schedule I drug just like heroin and attract the severest criminal charges as well. That designation is opposed by many lawmakers, researchers, and doctors. Nearly 61 percent of Americans are in favour of legalising marijuana.

"Thanks to Schedule One of the Controlled Substances Act, Americans, especially people of colour, are needlessly incarcerated, and critical medical research into the healing properties of cannabis is placed on hold for no good reason," Adam Eidinger said, according to SF Gate Blog.

The Drug Enforcement Administration (DEA) is the final authority that decides on cannabis' "schedule 1" status.

In April, a series of protests by pot activists took place in front of the White House, including a "smoke-in." Some see the talks as a fall out of the protests.

The DEA is also showing some flexibility. In an April 4 memo to lawmakers, DEA said it will decide whether to reclassify marijuana before the end of the summer.

The new thinking in White House was evident in the words of Michael Botticelli, director of the White House Office of National Drug Control Policy, to a group of UN Officials: "law enforcement efforts should focus on criminal organisations – not on people with substance use disorders who need treatment and recovery support services." 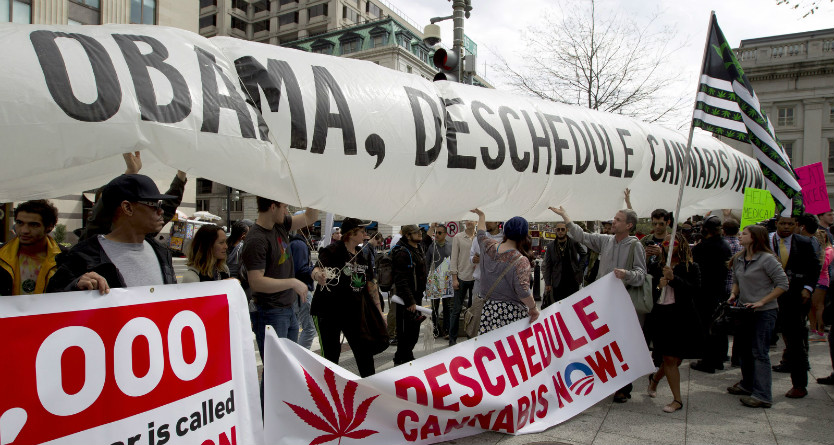 Why is this news coming out of Australia instead of USA sources?
Radogast