While Ohio became the 25th state to legalize medical marijuana this fall, the city of Oxford and Miami University are still working out policies under which to allow its sale and use.

Under Ohio House Bill 523, medical marijuana became legal Sept. 8. As part of the law, smoking is not permitted, but the use of various kinds of edibles and oils is - for persons with various medical ailments including cancer, HIV/AIDS and glaucoma, among other conditions.

Under the law, the state has until September of 2018 to create a system by which Ohioans with a qualifying medical condition can buy and consume medical marijuana.

Cities already know, however, that retail dispensaries cannot be located within 500 feet of schools and churches. That could make it hard for dispensaries to operate in Oxford, according to City Manager Doug Elliott.

"If you have the map in front of you, it shows a good portion of the city would not be able to do this," Elliott said.

Oxford is not only home to Miami University, but also Talawanda High School, Talawanda Middle School, and three other elementary schools. In addition there are 24 area churches and campus ministries in the city.

The grey boxes in the Oxford school map would be off-limits to dispensaries. The only available land is on the outskirts of town, where most commercial property is already taken.

"A large portion of the land near the train tracks is already occupied so there won't be much land (for dispensaries)," said Elliott.

But while Oxford appears to be a shaky candidate for medical marijuana dispensaries, there are efforts to make it accessible in larger, nearby cities like Hamilton, Cincinnati and Dayton. Once the law is completely implemented, these dispensaries will begin to pop up throughout the state.

In nearby Middletown and Liberty Township, meanwhile, city governments have begun to impose restrictions to keep dispensaries from popping up. And Ross Township is putting a temporary ban on the medical marijuana business until most conditions of the law fall into place by September of 2018.

Still, with the new law, the university has had to make changes to its policy.

"We had a long-standing drug-free policy at the university," said Director of Communications Claire Wagner. "We have since added an addendum for medical marijuana. There are some restrictions of it which means the use on campus is still prohibited."

The university still does not allow the use of marijuana on any campus property, despite the change in state law.

But the prohibition does not extend to research about marijuana approved by 10 different federal agencies, the Drug Enforcement Administration, the Centers for Disease Control and Prevention, and the Food and Drug Administration among them.

Additionally, the revised policy says that the "university will accommodate students who are legally authorized Ohio medical marijuana users." Students with that legal right are told to submit a letter to Miami's dean of students at DeanofStudents@miamioh.edu.

On a related note, the university also has a long-standing smoke-free policy. That will not change since Ohio's medical marijuana law "expressly prohibits smoking or combustion of medical marijuana."

According to a Quinnipiac University poll conducted in May of 2016, shortly before HB 523 took effect, 90 percent of Ohioans favored medical marijuana, while 52 percent supported the decriminalization of small amounts of marijuana. That number suggests that public opinion is shifting.

"What you see with marijuana, and this has happened rather quickly, is a much lower perception of risk and a much higher rate of acceptance," said McNeill.

Despite this, McNeill is wary about going all in on the benefits of marijuana without proper research. 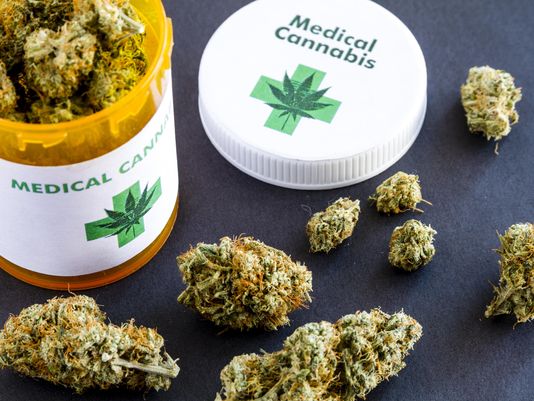