Bend has one of the largest medical marijuana scenes in Oregon, two months after the state began issuing licenses for pot storefronts. There are eight licensed dispensaries in Bend, the third-highest number of any city in Oregon, according to state data. Only Portland and Salem have more dispensaries, and several other large cities have fewer, including Eugene, which has five. Some people question whether there are enough medical marijuana patients in Central Oregon to support the large number of pot retailers. Tristan Reisfar, clinic manager for Mothers Against Misuse and Abuse, said many patients grow their own pot and do not purchase medicine from dispensaries. Mothers Against Misuse and Abuse educates people about the medical marijuana program and provides consulting physicians to help people qualify for the program.

Reisfar is also a member of a citizen advisory committee for the Bend Police Department. "Just from my humble opinion, there's not that many patients needing to purchase cannabis out there to keep these places busy," Reisfar said in an interview earlier this month. "It's still cheaper to buy cannabis on the black market in this town than from a dispensary." Rob Bovett, legal counsel for the Association of Oregon Counties, said it will be interesting to watch how the Bend dispensary scene develops under the new regulations.

"I find Bend to be kind of a fascinating little experiment going on, just to see how this all rolls out," Bovett said. "It's just an interesting little transition, because I haven't seen any other place in Oregon that's super saturated with dispensaries like (Bend is)." The Bulletin's analysis of state data reveals Josephine County has the highest percentage of medical marijuana patients out of its total population. The percentage of Deschutes County residents with medical marijuana cards – 1.9 percent – is the eighth highest in the state, after Jackson, Curry, Coos, Lincoln, Douglas and Tillamook counties. Only 21 cities have licensed dispensaries.

The number of dispensaries in Bend continues to shift on a weekly basis, as some stores closed because they did not meet new state regulations, such as a prohibition on more than one dispensary within a 1,000-foot radius. The large number of dispensaries in Bend also has not deterred more people from getting into the business. The Good Leaf dispensary has a provisional license and plans to qualify for a regular license and open Monday, according to Kevin Fehrs, whose wife is in charge of the dispensary.

As the medical marijuana landscape shifts, so too does law enforcement's role in its regulation. The Bend Police Department was not searching for violations of the new state dispensary regulations, but police were drawn into an enforcement role when dispensary operators began to complain that other stores were violating state medical marijuana law. Bend Police Capt. Ken Stenkamp said recently that the department investigates criminal activities, which in Oregon does not include medical pot operations as long as they comply with state law. "We don't go out and close businesses," Stenkamp said. "It's such a gray area. We're just trying to feel our way through this."

Law enforcement has intervened at least once when they believed a medical marijuana facility was operating outside of state law. In August 2013, the Central Oregon Drug Enforcement task force arrested the owner of the only medical marijuana dispensary in Crook County on suspicion of selling pot to people who were not medical marijuana patients. Bend Lt. Paul Kansky is a member of the Central Oregon Drug Enforcement multi-agency task force. Kansky said Friday the task force might not be the appropriate agency to investigate a report that a dispensary is violating administrative rules, but the team would likely investigate any report of drug trafficking by a dispensary.

The Oregon Health Authority oversees medical pot providers and is preparing to begin enforcement. Karynn Fish, an agency spokeswoman, said the three inspectors for the Oregon Medical Marijuana Program will begin inspecting all the licensed dispensaries in a couple of weeks, something they are required to do within the first six months after the new state regulations took effect. Fish said the health authority issued provisional licenses to many dispensaries to provide time for them to install expensive security systems. "Because it's expensive to build out a security system, the Oregon Health Authority allows people to apply and meet all the other requirements except the security system. They have 60 days to get that." In the meantime, dispensaries must close. "It is not a license to operate," Fish said.

Fish said the health authority received only a handful of complaints that dispensaries continued to operate after they were denied licenses. The agency investigated these complaints and when dispensaries appeared to be out of compliance, the agency informed the owners. In Bend, the Police Department sent a letter to the Cannacopia Collective, informing the dispensary that the department received a complaint that Cannacopia continued to operate after the state denied its application for a dispensary license. The state had already issued a provisional license to The Herb Center dispensary across the street, and state law prohibits more than one dispensary within a 1,000-foot radius.

Keith Doyle, managing director of Cannacopia, said in an interview on May 6 his dispensary already met all the security requirements under the new dispensary law, and it seemed unfair for the state to issue provisional licenses to inadequately equipped dispensaries. Cannacopia closed and Doyle is appealing the state's decision to deny him a license. Doyle posted a note on the door of Cannacopia, criticizing the state for forcing his dispensary to close while others managed to remain open while applying for licenses. He called upon Cannacopia customers to boycott a dispensary in Bend that Doyle believes complained about Cannacopia.

Michael Hughes, a lawyer who represents Cannacopia and other marijuana businesses around the state, said the dispensary believed it could continue to operate throughout the license application process. "They were operating under the same assumption that everybody else was after March 1," Hughes said Friday. Stenkamp, with the Bend Police Department, said the market will probably resolve any overabundance of marijuana stores. "Let's see what's still here in a year," Stenkamp said. 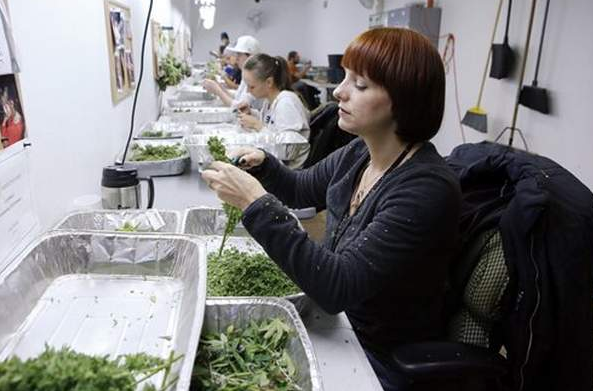