Hide the Pringles. The potheads are comings.

Pro-marijuana legalization activists and recreational partakers of weed are planning a public pot party around Philadelphia to mark the second anniversary of marijuana decriminalization: a Pop Up Weed Garden.

Pro-pot activist and comedian NA Poe spread the word about the event in part by posting a video of himself prancing through Philly while donning a marijuana leaf costume along with a flag bearing the message, "A spliff a day keeps the doctor away."

"It's a celebration, very publicly," Poe said. "We want to be accepted as a community."

Poe organized the party along with other marijuana legalization acitivists. He's not sure how many people will show up since news of the event has been going semi-viral on social media, but it could be big.

He advised guests to not bring more than the 30 gram-limit of the decriminalization statute.

"Don't bring more than 30 grams. Don't bring glass. Wrap up a couple of bones or blunts," he said. "If you want a chair, bring a chair. If you want your own refreshements, bring them, because we don't know how many people are going to be there."

Even local businesses have reached out to sponsor the event.

"We'll have munchies all provided by local businesses," he said. "It's great to be so welcomed."

Under the decriminalization statute signed by Mayor Kenney in October 2014, marijuana possession up to 30 grams is punishable by a $25 fine, and smoking in public can lead to a $100 fine.

Marijuana activists estimate that the police department could be saving as much as $4 million a year in manpower costs since decriminalization. 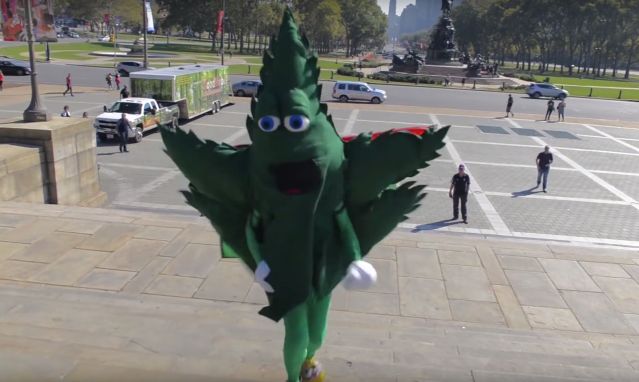