Long before Parrish's Cathy Jordan became president of the Florida Cannabis Action Network and before she campaigned in Tallahassee for the not-yet-passed Cathy Jordan Medical Cannabis Bill, she used to sit on the Palma Sola Causeway and chat with people about medical marijuana.

It was about 15 or 16 years ago that Jordan and her husband, Robert, started talking to people about her amyotrophic lateral sclerosis, also known as ALS or Lou Gehrig's Disease, and how marijuana helps curb the symptoms by drying her mouth, stimulating her appetite and helping with her pain.

Now, Jordan, who was diagnosed with ALS 27 years ago, is returning to her -- excuse the pun but it's apt and one she likes -- grass roots.

Between the hours of 10 a.m. and 1 p.m. Saturday, Jordan will be back on the Causeway, sitting by the road.

She won't be hard to find. She will be part of a caravan of vehicles whose occupants will put up a banner for Florida Cannabis Action Network, also known as Florida CAN.

"I decided I want to go back to just talking to people and letting them know what marijuana has done for me," Jordan said. "There are so many others out there suffering. Terminally ill people can't wait. We need to help these people today."

"We're going to start getting signatures every Saturday," Robert Jordan said. "We are trying to draw attention to this crucial need. Our bill in Tallahasee is not dead yet, so we will have petitions there for people to sign as well."

The Jordans are often asked why they don't move to one of the 18 or so states that do allow medical cannabis.

"We love Florida," Robert Jordan said. "This is our home."

A statewide organization backed by John Morgan, a principal in the personal

People United for Medical Marijuana is soliciting roughly 700,000 signatures and hopes to place the item on the 2014 general election ballot, Robert Jordan said. The Jordans don't agree with everything on Morgan's petition, however.

"In our Cathy Jordan Medical Cannabis Bill, you can grow eight plants if you are a patient," Robert Jordan said. "In their bill, you would get your cannabis at a cannabis treatment center. You can't grow your own under their bill. We don't agree with that.

"Cathy has used a hybrid form of two different forms of cannabis, which has been effective for her," her husband said. "There are so many different strains of this plant, it has taken us all these years to find out what works for her." 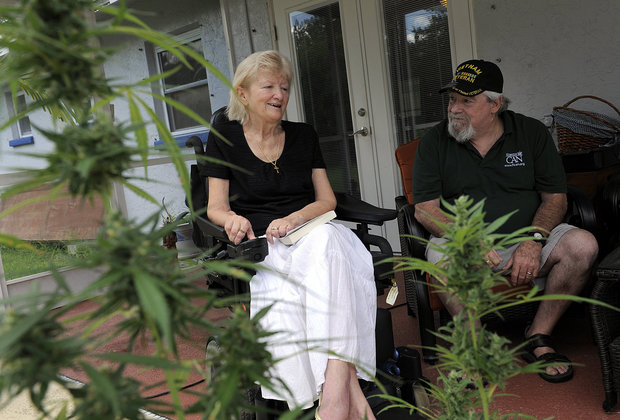