Recreational Marijuana Delivery Expands In Las Vegas, Could Be Halted By State

After more than a year and a half of delivering medical marijuana to patients, Oasis Cannabis in Las Vegas has expanded its delivery services to recreational customers.

But under draft permanent regulations from the Nevada Department of Taxation, the delivery for recreational customers could cease to exist due to security concerns. The current temporary regulations, which allow for delivery, remain in effect through the end of the year.

"Safety is a very big priority for us when it comes to everything that we do. We want to make sure first of all that we know who we're delivering to," he said. "So we verify the identity of the individual who has placed the order. And then our current policy is to only deliver to the address on the ID that was provided to prove the age of the individual."

In addition to the convenience factor of having marijuana delivered to homes, Sillitoe said delivery helps cut down on the black market.

"We really think that in order for us to compete with the black market and to reduce the impact they have here locally, we need to have similar services available," he said. "So delivery is extremely important for public safety to reduce overall criminal activity and that's been expressed to us as an industry by the Las Vegas Metropolitan Police Department."

While that would allow for delivery, Sillitoe said that could be a deterrent in itself.

"Many people who want delivery are doing it because they have mobility issues or maybe mental health issues," he said, noting that there are recreational customers who may also be medical patients who did not register with the state.

However, Sillitoe said just allowing for delivery in the permanent regulations would be progress.

"It's going to be a little bit of a challenge but as long as we can have delivery, then we can work on improving it," he said.

Even though delivery was allowed once retail marijuana sales began July 1 under the temporary regulations, Sillitoe said Oasis Cannabis waited to roll out its own delivery program until the beginning of August to make sure the safety concerns were addressed.

"That's why we took a little time to roll it out because we wanted to craft our own internal policies that were more strict than what the state was limiting us to that would increase the overall safety of the program," he said.

Oasis' vehicles are not marked and the only identification of the driver is a badge signifying who the driver works for. Oasis Cannabis uses its own employees for delivery but other dispensaries use delivery services.

Sillitoe said the dozen drivers have minimal cash on them besides what is needed for the order. There is a minimum $50 purchase for delivery but the delivery itself is free.

In addition, the amount of marijuana is limited. Drivers are not allowed to deliver any more than is legal -- one ounce -- but usually customers do not purchase that much at once, Sillitoe said.

"The amount of product they are actually taking on any given delivery is also very small," he said. "At most, $100 worth of product. We don't our feel our drivers are really going to be targets." 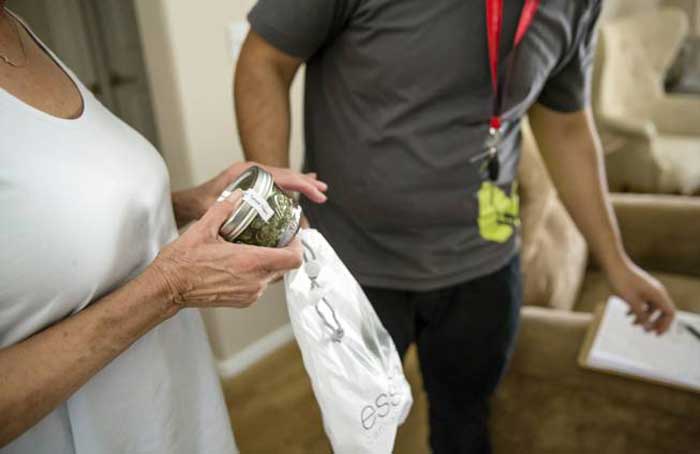