William "Jackrabbit" Large pulls his SUV onto the side of a downtown Seattle street, parking behind an Amazon Fresh delivery truck and carrying a product the online retailer doesn't offer: marijuana. The thin, bespectacled Large is a delivery man for Winterlife, a Seattle company that is among a group of new businesses pushing the limits of Washington state's recreational pot industry by offering to bring marijuana to almost any doorstep. "It's an opportunity that should not be missed," Large says with the kind of fast-talking voice meant for radio. While delivery services have existed for years to supply medical marijuana patients, the rise of similar businesses geared toward serving recreational users in Washington and Colorado highlights how the industry is outpacing the states' pot laws.

Winterlife's business model is a felony under Washington state law, which allows only the sale of pot grown by licensed producers at licensed retail shops. Lawmakers should consider changing that, said Alison Holcomb, the author of the 2012 voter initiative that legalized the recreational use of pot, because providing more ways to access marijuana will help push people to the legal pot market. In Colorado, where marijuana regulations require sales to be done in licensed dispensaries, there's a flourishing market online for marijuana deliveries made in exchange for donations.

The law allows adults over 21 to give one another up to an ounce of marijuana, provided it is done "without remuneration." The only known case of criminal charges brought against a Colorado delivery service came last year, when the owner of a pot-for-donations service in the Colorado Springs area faced felony distribution charges. He committed suicide before trial. In Washington, where the legal pot industry kicked off last week, companies like Winterlife jumped into fill demand from consumers for marijuana while the state spent the past 19 months building the regulations and licensing growers and retailers. Winterlife co-founder Evan Cox, a vegan and bicyclist enthusiast, began by advertising on Craigslist and made deliveries.

Now he has around 50 full and part-time employees, including 25 to 30 delivery personnel in cars and bicycles. Operators field between 400 and 600 calls a day. "We found a way to really fill the need that the Washington voter said that there is," he says from his company's headquarters, where workers busily sort, cut and package their different marijuana products into branded clear bags. The Winterlife model is simple. They have a website that features their products — marijuana flowers, edibles and pipes. After making a call, the consumer's phone is relayed to a driver, who then asks them where they want to meet. Cox is fully aware of the shaky legal ground where he stands.

All of the drivers operate under animal-inspired pseudonyms. There's a jackrabbit, a wombat, a possum, among others.Cox is also mostly staying within Seattle, where police have tolerated the company's presence and voters in the city made marijuana crimes a low priority for law enforcement years ago. As the business kept growing, Cox decided to visit an attorney for advice. The company hopes that by checking the identification of its customers and opting not to mail the product it will avoid legal trouble. Sgt. Sean Whitcomb, a spokesman for the Seattle Police Department, said Winterlife is undermining the spirit of the legal marijuana law. So far, he said, the police department has bigger priorities.

But he said the department could change its stance if it receives information about underage sales or other complaints. The department recently seized more than 2,200 plants from a medical marijuana grow that was bothering neighbors. Minnesota resident Kendra Davis heard from her sister about Winterlife and gave them a call on a recent visit to Seattle. She met Large behind the Amazon delivery truck. "I figured while I'm here I might as well partake where it's legal," says Davis, who added that she did not start smoking until she was 30. "The kind of high we're looking for is the giggly fun," she tells Large. Then she buys a handful of truffles and a quarter ounce. 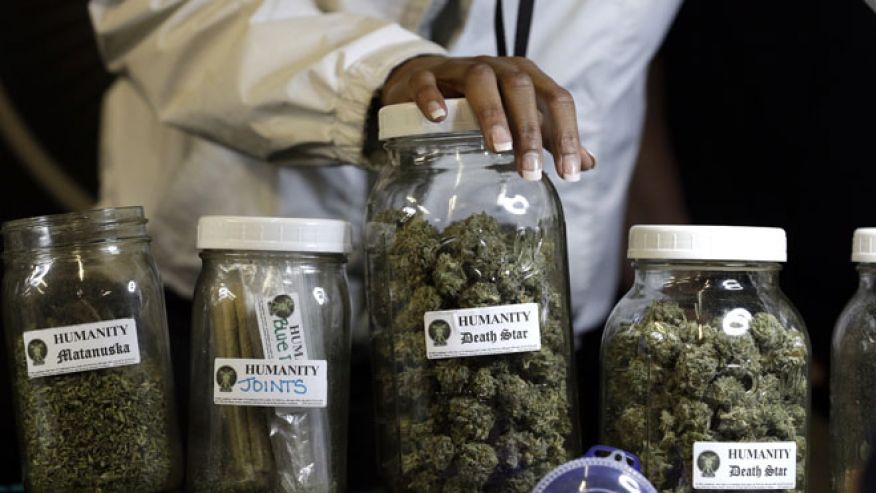