City Attorney Gary Saenz called Monday for a council committee to immediately begin studying alternative ways to enforce its medical marijuana ban, including allowing and regulating a small number of dispensaries. "We will present a plan which essentially acknowledges the futility and high cost of attempting to completely eradicate marijuana dispensaries with our current system, by which we will continue to spend hundreds of thousands and eventually millions but will never significantly achieve success," Saenz said, reading from a prepared statement. "Instead, by conceding to California's policy of allowing marijuana use for medical purposes, and permitting dispensaries that are highly regulated, we can move the distribution of medical marijuana from the black market to the regulated market."

Alongside that, Saenz had a message for illegal medical marijuana dispensary owners, operators, employees "and, most importantly, real property owners who persist in defiantly allowing their property to be used in violation of San Bernardino's land-use regulations." "Know that it is now time for you to leave the city of San Bernardino," he said. "... Know that formulating a new plan to effectively eliminate the operation of illegal medical marijuana dispensaries in this city has become a top priority of this city attorney." Penalties, fines and liens against property owners and landlords "will not be reduced, but instead aggressively imposed, enforced and collected by all appropriate legal actions," Saenz said.

The City Council agreed to have the legislative review committee – three council members who make recommendations to the full council – discuss details of Saenz's plan and any other input at a meeting Monday, then have the full council consider it at the next meeting, Aug. 4. Establishing a medical marijuana dispensary has been illegal in the city since 2007, when a temporary moratorium was passed and followed by an extension of the moratorium and then a series of ordinances passed as recently as 2011.

Violators were assessed fines of $1,000 a day, but those weren't collected and the ban wasn't enforced its constitutionality was uncertain alongside state voters' approval of medical marijuana use – until last year. Only days after the state Supreme Court's unanimous decision that cities could ban dispensaries through land-use bans such as San Bernardino's (and Riverside's, the city that went to the state Supreme Court), San Bernardino began raiding dispensaries and then-City Attorney James F. Penman announced an intention to shut them all down.

Administrative, criminal and civil remedies continue, Saenz said. "Civil injunctions have been used effectively to end dispensary operations at specific locations," he said. "However, the injunction process is the most costly for the city to pursue, and therefore, can have little effect on the entire city unless we are willing to commit substantial resources in an extensive city-wide pursuit... We continue to expend valuable and limited police, code enforcement and attorney resources with frustratingly insignificant results."

Three members of the public spoke after Saenz's report, two in favor of limited legalization in the city and the third asking to be on the committee. (He was told the committee consists of council members but he was welcome to attend.) Allowing some highly regulated dispensaries – as cities including San Diego, San Jose and Palm Springs do – is just one recommendation, Saenz said. A statement sent after the meeting on Saenz's behalf by Westbound Communications, which the city hires for public relations, on Saenz's behalf didn't mention the possibility of allowing some dispensaries except with a link to a report he wrote. That statement, which is also posted on Saenz's Facebook page, instead emphasized the get-tough portion of Saenz's proposal and dispensary's connection to gangs.

"Our message is loud and clear," the statement said. "It is time for illegal operators to leave San Bernardino — this City's leadership and Police Department view these dispensaries as a public nuisance and an obstacle to our efforts to build a prosperous city. I will work closely with the Council, Mayor and Police Chief to develop an effective plan that will eliminate the operation of illegal dispensaries. This will include the liberal use of penalties, fines and liens against irresponsible property owners that will be aggressively imposed, enforced and collected. Beginning August 18, illegal pot shops will no longer be welcome in San Bernardino." 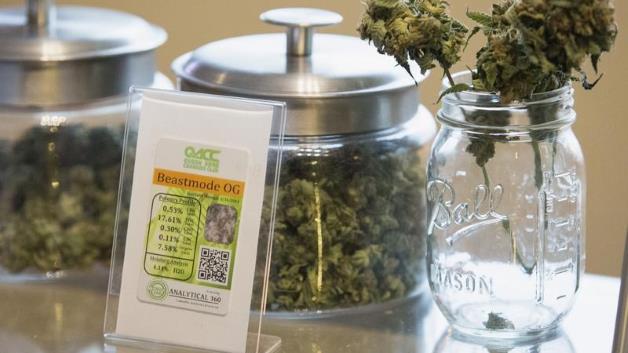