Instead of a state-run liquor store, a building in Seattle's Ballard neighborhood now holds "the Whole Foods of weed," according to the man who owns the business inside.

The opening comes as Washington's Liquor Control Board and lawmakers decide how to regulate recreational marijuana sales in the wake of Initative 502, which legalized the use and possession of small amounts of pot.

"This could be the face of what I-502 enabled pot looks like," explained Green Ambrosia owner Dante Jones.

Jones' business has operated since 2011, but only recently opened a storefront. Inside, behind a bamboo wall, is one large glass table loaded with jars of marijuana. There are restrictions on how much medical marijuana a business can have on sale.

While planning for whatever regulations may come from I-502, Jones said Saturday he is not sure how licensing will work.

"We're preparing for it," he said, "As a business owner, the only thing I can hope for is that they're going to continue the same set of standards (included in the initative)."

Public forums are being held across the state on how to license recreational marijuana. No matter what the state decides, it is still possible the federal government could take action against Washington State since, according to federal law, marijuana is still illegal. 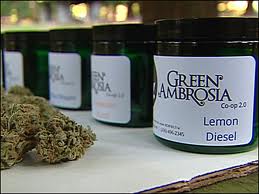 Feb 25, 2013
Truth Seeker
T
T
Seattle Could Limit Where Pot Can Be Grown And Sold

Oct 31, 2013
The General
T
T
Vending Machines For Pot May Be Headed To Washington